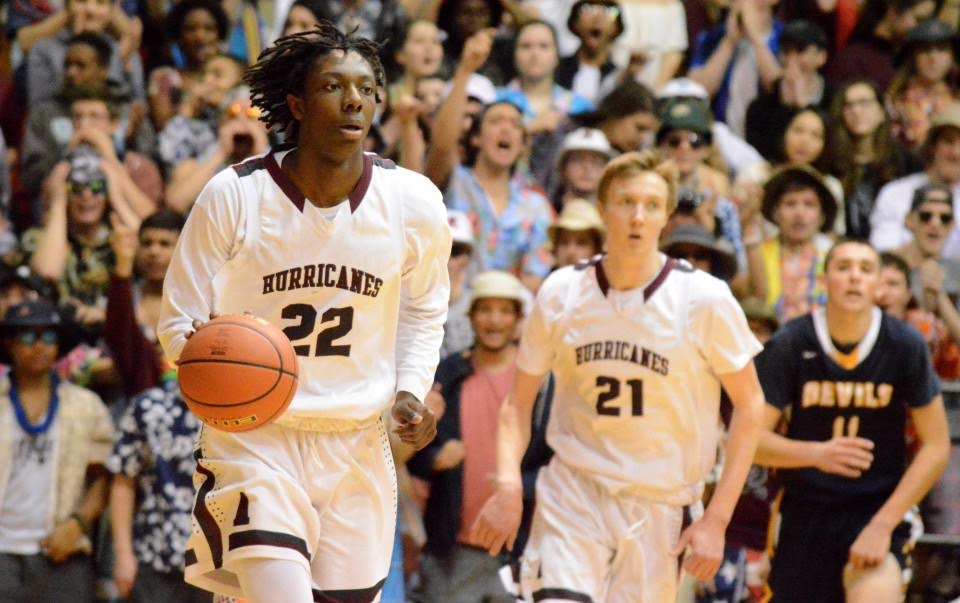 “The feeling of losing’s not a good feeling. We want to win,” said senior boys’ basketball guard Iani Ferreira, who echoed the sentiments of the entire squad.

After losing to Putnam two years in a row, the Hurricanes felt that this year was their time.

Before their championship game, junior forward Tate Rietkerk was pumped.

“We wanna get this chip for Devo [McCall], Isaac [Siegel], Alex Mangels, Jamie Carey, just everyone who’s been before us and lost cause this is our last chance,” he said.

Coach Jim Matuszko agreed that this team had a real chance.

“Every day [Matuszko] tells us that we can do something special with the talent that we have and the players that we have,” said Rietkerk.

The Hurricanes appeared to coast through the regular season, finishing the league season with a record of 8-2 to win the Valley Wheel Conference.

They also improved their overall record from last year – going from 16-9 to 17-6.

However the entire season wasn’t that easy.

Rietkerk remembered one game in particular that was a low point of the season.

“We were going to Wachusett to play them. It was a long bus ride and we had just beaten two easy teams,” he said. “We ended up getting blown out [61-34]. I think we had like two points in the first quarter.”

The loss dropped the Hurricanes’ record to 5-3 and some might have doubted them.

But the team was too strong to let a loss faze them and “after that we bounced back and won like seven in a row. I think it shows a lot about our team that we were able to bounce back like that,” Rietkerk said.

Much of the burden fell on the shoulders of senior forward and captain Meikkel Murray.

In the preseason a lot was expected of him.

“[The] senior forward will be one of the top players in the region. A dangerous slasher with tons of athleticism and length, Murray averaged 16.9 points per game last season and will be Amherst’s top threat on both ends,” said Connor Ryan of MassLive in his preseason ‘Super Seven’ piece.

Murray more than lived up to the ‘Super Seven’ hype: he was the team’s leading scorer, averaging 21.2 points per game.

Murray also reached the 1,000 point barrier this season, in the Hurricanes’ penultimate game before the playoffs.

He scored 31 points in an 84-64 win over East Longmeadow and hit the elusive milestone that just three Amherst players had achieved before him.

Speaking with Jamie Cushman, a reporter for the Daily Hampshire Gazette, about it after the game, Murray said, “My coach just told me to attack, nobody can guard you, so just do your thing and keep attacking.”

The other players appreciated the rarity of his achievement and wanted to be part of it. “I wanted to get the assist and I did,” said Ferreira. “Seriously though, to see my boy get 1,000 points: that’s something great.”

The fans in attendance certainly enjoyed it as well.

“I went nuts. It was just unbelievable to see one of my boys do something that hasn’t been done since 1999. We were born in ‘99 so it’s kinda like he was born to do that,” said Nick Rivera, a self-proclaimed ‘super-fan.’

However, for a few days it looked like Murray might not get his special moment at home court when they thought he hit 1,000 points in a 72-64 loss to West Springfield.

“We were pretty bummed out when he got it on the road but they had miscounted and he was actually [six] points short,” said Rietkerk.

The miscount allowed Murray to head into senior night on February 27 with the knowledge that he needed just six more points.

When he reached the mark, the gym exploded, certainly giving Murray a much better reaction than he got at West Springfield, Rietkerk thought that it was “amazing that he got to get it on senior night with so many people he knows there.”

Murray driving and senior forward/center Seth Bella Hunter posting up in the paint opened up space on the perimeter.

Starting guards and other captains Will Budington, Meikyle Murray, and Tajahn Joyner were the ones to capitalize on the space.

Together the trio averaged 26.8 points per game while also finishing as the top three in three pointers made on the team.

Budington made 34 with Meikyle Murray just behind, at 31. Joyner finished third with 12.

The Hurricanes mainly relied on their starting five for scoring this season, with Rietkerk providing a little punch off the bench, leading non-starters in points.

He figures to be a big part of the team next year along with Meikyle, the two biggest players from this year’s team who are not graduating.

This proficiency from beyond the arc helped fuel a deep postseason run for the third time in a row.

The Hurricanes beat East Longmeadow 74-68 in the first round on March 2 and followed that up four days later with a 65-61 win over Northampton.

Obviously, they didn’t finish off their wonderful season with a regional title.

However, nobody who was in attendance at March 10 at the Cage could deny what they witnessed this season: one of the most exciting regional finals in recent history.

Meikkel Murray became the first ARHS player to hit 1,000 points in three years of varsity ball, with his never-say-die spirit that buoyed the team and provided ‘something special’ that night and throughout the entire season.