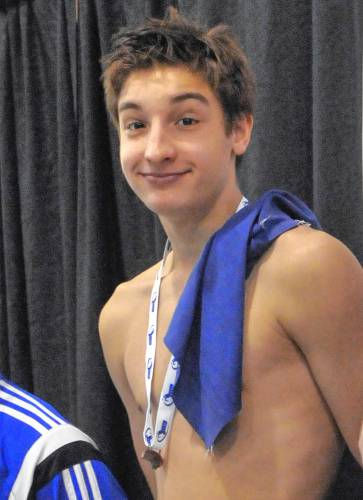 Luca Brashear prepares to dive into the competition.Photo: Kevin Gutting

At this point in his life, ARHS junior Luca Brashear is accustomed to greatness.

He remains undefeated in the diving event in school dual meets and easily qualified for the Western Mass and States Championship meets.

However, Brashear was not serious about diving  until eighth grade when his mother took a sabbatical to North Carolina and Brashear joined the highly esteemed Duke Diving Club.

“I had a lot of training in the intense program,” he said.

After that year, Brashear had improved enough to join the Junior Olympic team.

Upon his return to Amherst, Brashear joined the Springfield Area Diving Club at Springfield College.

He has been diving there since under the tutelage of Pete Avdoulos, who Brashear describes as a “great coach.”

While diving for ARHS, Brashear has had several coaches.

He is now coached by the Hurricanes’ record holder, Jason Cook, who graduated from Amherst High in 2008.

Cook has come back this season just to coach Brashear, as he is the only diver on the team.

Brashear said, “[Cook] definitely a pushes me a lot which I appreciate to some extent.”

Brashear finished second at the Western Massachusetts meet, losing out to Connor Pennington of Munson.

Reflecting on the meet, Brashear said, “My performance was moderate. It was an alright meet but I definitely wasn’t at one hundred percent.”

Going into States, Brashear was seeded twelfth and at the end, he once again finished second to Pennington with a score of 543.70 for 11 dives, defying expectations.

Brashear said he felt much better about his diving at States, getting a few tens and many nines from the judges.

“I was very focused and determined. I can often get in my head and just ruin my meet by doing that. Diving is really a mental game. I would say about 95 percent mental,” said Brashear.

Next season, Brashear’s goals are less about placement than they are about learning new dives and perfecting old ones.

Specifically Brashear said,  “I want to have a two and a half list on the 1 meter to get higher degree of difficulty dives.”

With Connor Pennington graduating at the end of this year, Brashear’s odds look good to win both the Western Massachusetts and States Meets next year.

After high school Brashear wants to dive at a college with a division 1 diving team with a diving tower.