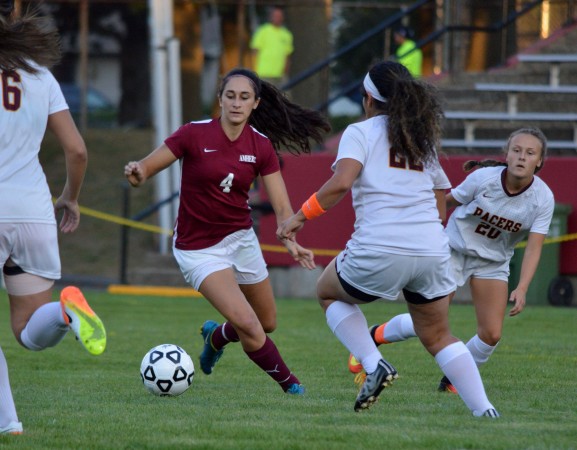 Senior Sage DeChiara fights for the ball during a game.Photo: masslive.com

The Amherst girls’ varsity soccer team started strong this fall with a 7-2-4 record. Girls’ varsity has been incorporating some new freshman players into their team, which is made up of half upperclassmen and half underclassmen.

There are two goalies this year on varsity, but neither was a starter before the seniors left. Amalia Butler and Reiley Lepak get about the same playing time, usually based on how they’re doing in the game, and against that opponent.

Amherst has started off the season strong, but has some challenges ahead of them.

“Our beginning of the season was easy, but the upcoming games will be harder,” said Clotfelter.

The girls’ varsity soccer team has never gotten past the first game in the tournament to win the state championship.

Clotfelter believes that this season they can advance past the first game and even make it to the finals.

“I believe that our team will definitely be a contender for states this year,” Clotfelter said. Their team is continuing to win despite the increasing difficulty of the games.

The team relies on big scorers like senior Sage DeChiara, who already has scored a total of 21 points during the season so far, compared to her highest scoring season of 2013, with 21 points.

DeChiara has scored a total of 74 points while at ARHS. “Sage is a great soccer player, and great person to have on our team,” Clotfelter said.