SAGA ready to kick off again 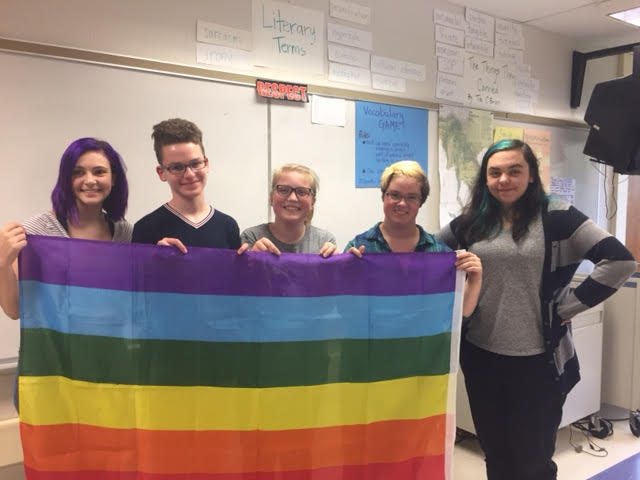 Members of the Sexuality and Gender Alliance.Photo: Peter Gao

One month into the school year, the Sexuality and Gender Alliance (SAGA) was into full swing.

Previously, “the work of former advisor Sara Barber-Just laid the groundwork and led the charge in getting gender-neutral bathrooms installed in the school,” said club advisor and special education teacher Emily Pritchard. “Transgender Week was built on that momentum.”

“We are working to bring as many students and school community members into the club, whether it’s to visit, or pitch in with school-wide events like the Transgender Awareness Week,” according to Ms. Pritchard. “SAGA ia also just a safe and relaxing place after school to talk.”

This year, the club is planning to do it again, but “bigger and louder,” Morris said.  SAGA also hopes to plan discussions, teacher workshops and partnering with other clubs.

Last year, during a staff meeting, SAGA suggested teachers should ask students their preferred pronouns at the beginning of the year as a way of making the classrooms a safer place for transgender students.

Principal Mark Jackson made the policy clear at the teachers’ first back to school meeting.

SAGA member think substitutes need to be made aware of this as they take attendance and interact with students. Mr.  Jackson hasn’t taken this on yet.

Mr. Jackson thinks SAGA does important work.   “[SAGA is] part of the work to educate the community,” he said.  “I hope [we at ARHS] can be supportive of how people self-define.”

SAGA members went to a Gay, Lesbian, Straight, Education Network (GLSEN) conference on October 1, 2015, in South Hadley where they had discussions on intersectionality, the idea that all of our identities intersect and overlap.

The group also had activities and discussions about current LGBTQ issues.

The mission of the club is to “promote a safe space for the LGBTQ students to come,” said Morris.  “A lot of people don’t understand progress as in Amherst.”

The club is made up of 10 to 11 people. It depends on the week,” said Melanie Barrows, the unofficial vice president of the club and currently a senior at ARHS.  She is known as “grandma” by club members.

The club is open to anyone.  Members meet every Thursday in room 113.