When the water stops flowing: the effects of local drought 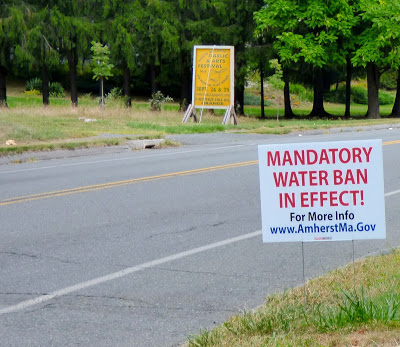 A lack of rain caused the reservoirs that Amherst draws from to be partially depleted.

As a result, Amherst residents are forbidden from watering lawns, filling pools, and washing cars, buildings, or other pieces of outdoor property.

Opinions on the ban vary, but many are supportive of the ban.  Paraprofessional Christa Pylant has a positive outlook on it.

Pylant has already had strong feelings about water conservation.

“I think that watering your lawn in June and July is ridiculous.  I don’t think people think about the water they are using,” she said.

Others feel that the ban is an invasion of privacy.

An anonymous ninth grader described the ban as “a bit excessive and authoritarian.”

The ARHS athletic department has sparked controversy for its avoidance of the ban by using water from the nearby public pool to water its fields.  Some members of the public feel this is an unnecessary waste of resources, but athletic director Rich Ferro stands firmly by his decision, calling it a necessary safety precaution.

When asked about the subject, Mr. Ferro explained that the drought has disrupted the athletic department’s strategy to rotate the use of different parts of the field.

“By rotating, it allows different sections to heal,” he said.

He also talked about how the dry fields have resulted in more than just cosmetic problems, as the hard ground makes it easier for injuries to occur.

“I generally agree with the ban, but it’s hard when it impacts the safety of our student athletes,” he said.

Another point Mr. Ferro made was that they are putting good use to water which might otherwise be wasted.

He and the athletic department were granted access to the 100,000 gallons of water from the War Memorial Pool  across from the high school.

The pool is only open from Memorial day to Labor Day, and after that, the water is normally just flushed into the sewers.

Although the pool water has helped keep the fields moist, Mr. Ferro said the situation is still far from perfect.

In the future he’d like to see a synthetic playing field added to the ARHS campus.

“You can use it all year,” Mr. Ferro said. “There’s no mowing. You don’t have to worry about mud or New England weather.”

If this step were implemented, it would eliminate the athletic department’s reliance on the weather for a safe playing field.

Then, water resources like the pool could be put towards other causes in the event of drought.