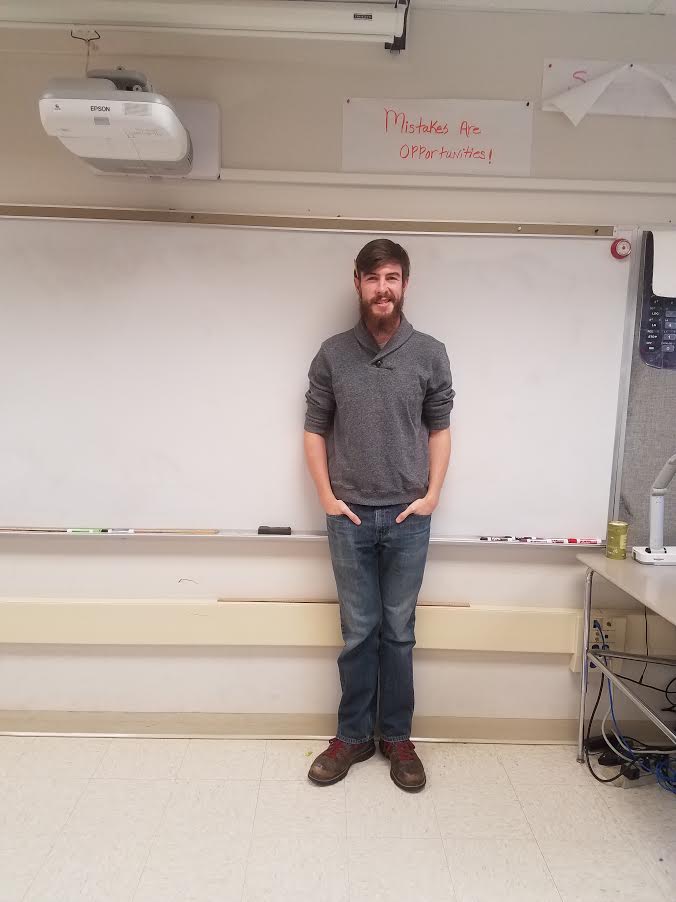 Alex Lariviere is a newly hired math teacher, who began work at ARHS last year as a full time substitute for Steve Saxenian during his medical leave. Mr. Lariviere teaches pre-calculus honors and the Integrated Math Program in room 310.

Mr. Lariviere’s path to teaching began at his home on the Cape. “My mom is a math teacher, so I grew up surrounded by math teachers that my mom hadover,” he said.

After graduating from high school and attending UMass, he knew he wanted to do something math related but he wasn’t sure what. In his second year, he decided to try taking some educational courses. “I loved them,” he said. Therefore, shortly after graduating, he found his way to ARHS.

Ever since Mr. Lariviere was little, he has had a love for learning new things, whether it was figuring out the answer to a particularly hard math problem or learning a new jig to play on his bagpipes.

“Figuring out or discovering something makes it yours, and that feeling of discovery is amazing,” Mr. Lariviere said. One of the reasons he became a teacher is to share that feeling with other people.

Mr. Lariviere looks forward to working with the other math teachers. As a new teacher, he hopes to learn from them and further improve his own teaching.

Mr. Lariviere even has a math-related tattoo, which is a copy of the golden record with the helium conversion engraved on it, that sits aboard the Voyager Two probe, which was sent into space to explore the Neptunian system.

It was tattooed by his cousin who, like many of his other family members, loves exploring the arts.

Mr. Lariviere’s mother is a pro-quilter when she isn’t teaching, his grandfather weaves Nantucket baskets, and his brother is a glass blower. Although Mr. Lariviere doesn’t practice any visual arts, he does play the bagpipes.

When he isn’t teaching Mr. Lariviere also enjoys biking, practicing juggling, and playing disc golf or Dungeons and Dragons with his friends.