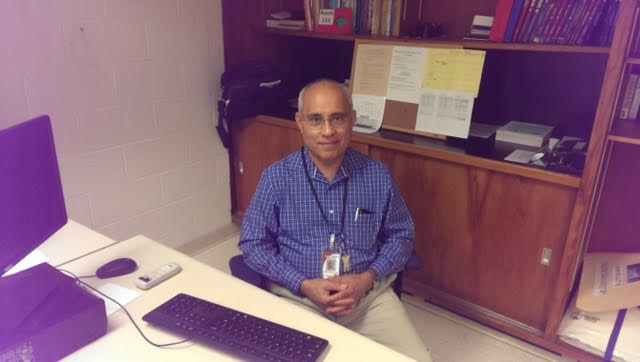 While living in Puerto Rico (for 54 years), Mr. García began as a middle school teacher, and then later, landed a job as an elementary school teacher who taught different grades.

During his last years working at the elementary level, he taught mathematics. Afterwards, Mr. García became a librarian for a middle and high school. He was later a school principal for 14 years, the last job he had in Puerto Rico.

Mr. García moved to the United States 20 years ago. He started as a bilingual teacher in Springfield, Mass., and then later became a Spanish teacher in different schools around the area. Mr. García also taught Spanish at Holyoke Community College.

Before even working in Amherst, Mr. García said, “I had already come to this area frequently, since it is the only place I can buy whole wheat pizza, at Sibies Pizza. I have been eating pizza for 20 years!”

Mr. García enjoys the quiet atmosphere and small town of Amherst, and is fascinated by the amazing number of colleges within the area.

Mr. García loves to travel, and has been to many different countries, such as Spain, France, England, and Canada. He has also been to the Caribbean and Central America.

Mr. García especially enjoyed his trip to Italy, as he said the country’s “culture was very rich.” He hopes someday he can visit Hawaii, Bermuda, and South America.

Mr. García is “ happy to be working here,” he said. He likes teaching Spanish, so he can share his language and culture with students.

As a teacher, Mr. García likes helping and contributing to students’ lives. “We live in a competitive world,” he said. “It is important to know two or even three languages.”