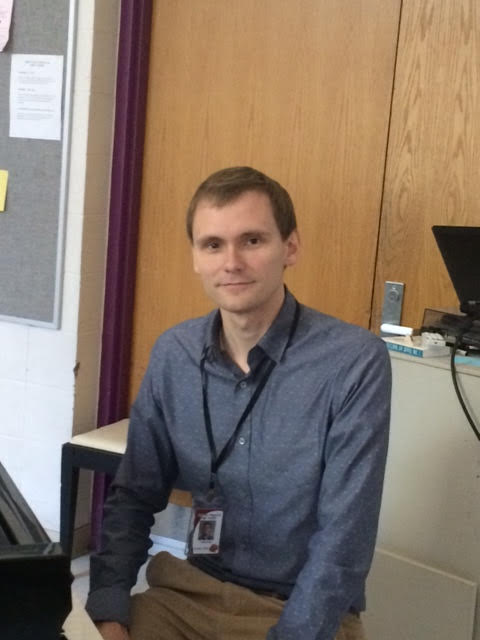 This year, there are several new teachers at ARHS. One of them is Todd Fruth, the new Chorale teacher. He leads the three choirs: Chorale, Hurricanes, and Concert Choir.

In addition he teaches Music Theory as well as Music in the Americas next semester. He also teaches a class at the South East Campus.

Before moving to Hadley in July, Mr. Fruth lived in Falmouth, Cape Cod, where he taught music and piano at Falmouth High School for four years.

He grew up in Toledo, Ohio near Detroit and had a fun childhood. Sometimes during recess when he was in third grade, he said he watched robins that were out on the field try to catch worms.

When he saw one catch a worm, he ran at the robin so as to save the worm. “I guess I felt bad for the worms,” said Mr. Fruth.

Mr. Fruth started taking piano lessons at the age of six, and was in the school choir in elementary school.

He studied music and psychology at Amherst College as an undergrad. “I didn’t go into college wanting to make music my life,” said Mr. Fruth. “But I had great teachers and professors that inspired me.”

He earned his master’s degree at Indiana University.

Mr. Fruth enjoys ARHS so far, and likes how the students are thoughtful, curious, and respectful.

He hopes that more students join the music program here at ARHS, and wants to encourage people to stop by his office and say hi. “I want the program to be twice as big,” Mr. Fruth said.

When picking music for his choirs, Mr. Fruth selects a variety of pieces with different cultures and time periods. “I want to challenge them but not bore them,” he said. “I also want to create a program that works, with an opener and closer.”

He enjoyed traveling to Glacier National Park in Montana because there were amazing hiking opportunities.

Mr. Fruth has also visited 48 states, only missing Hawaii and Alaska. He also likes singing with “Luminati,” an ensemble in the valley with college students and other members of the community.

Some of the things on Mr. Fruth’s bucket list are visiting the two remaining states, Hawaii and Alaska, writing an original choir piece, and presenting at a music conference.

To help him achieve those goals, he will keep in mind the best advice he’s received: you’re responsible for your happiness. “Events happen,” he said. “But you can choose to be affected by them or have them wash over.”