Transgender and non-binary students speak out 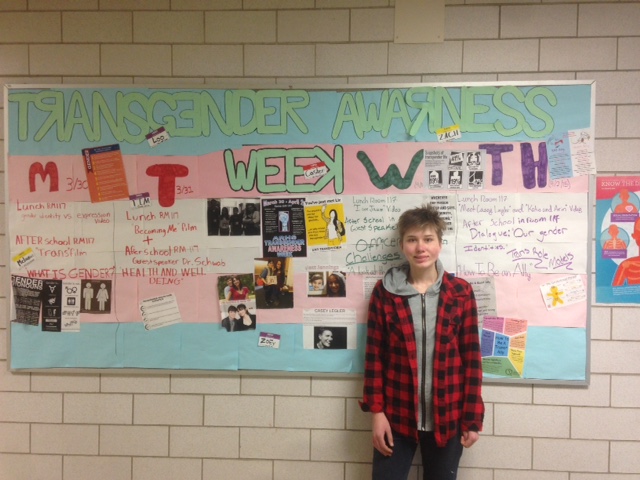 For students at ARHS who identify as transgender, gender-nonconforming, or gender-queer, navigating the often binary world of gender can be challenging. I spoke with a handful of these students about what their experiences were like growing up, moving through school, and coming to terms with their  identities.

For senior Jo Anderson, who uses they/them pronouns, the little things can make a big difference. “Allowing students to state their pronouns at the start of a class is a step toward recognizing the gender spectrum,” Anderson said. “It may not be ‘grammatically correct’ but it makes many feel safe.”

Conversely, Jo talked about how classrooms “instantly feel unsafe” if a class starts and the teacher doesn’t ask what the student’s pronouns are. This is because other students or the teacher might begin misgendering students from the get-go, and undoing it once it has occurred is hard.

Anderson, who would like to study engineering or photography in college, said they hated the word female as a kid. The word female “felt restrictive and had unspoken rules to follow,” they said. As a child, Anderson self-identified as a “tomboy” because it was more comfortable and others understood it.

Anderson started using they, them, and theirs pronouns in the summer of 2015, noting that they identify as “agender,” what they described as “a lack of gender.”

They claimed those who don’t know about transgender or non-binary gender identifications tend to joke about the subject due to how alien the concept is to them.

“It may be easier to think in only male and female terms, but there are many more genders that are not talked about,” they said.

“There are endless [genders]. You can’t restrict it,” said Anderson. “I think there have always been people who have not identified within the binary; it was just not talked about.”

In order to move forward, like all students I interviewed, Anderson has sought out support. Last spring, Anderson started talking to a friend about gender and how complicated of a concept it can be.

That’s when they started to realize they “are not alone.” They also started doing research about the topic. Before the start of senior year, Anderson declared their agender identity.

Anderson said they wished society could be more open, including Amherst, where they feel that if someone doesn’t fit the mold, then “they don’t get the automatic same respect.”

Anderson stressed about how education on this topic is the most important way to move forward.

ARHS student Vlad (name changed), also does not identify with either male or female gender. Vlad uses they/them pronouns, and said others called them a tomboy because of they used to chop off their own hair without permission and had a masculine presentation.

Two years ago, Vlad went to a support group in Northampton, where they learned a lot of terms they didn’t know before. That’s when they realized there was a term to describe themselves: non-binary.

Everyday Vlad tries to “pass” as masculine but worries about whether they are being successful. “In my mind I have to go through every day and think: am I passing today? Am I looking presentable? I try to pass as masculine because I’m afraid if I try to pass as feminine people will think I am a girl, so I don’t do that,” they said.

Vlad said they want to change society’s views on gender neutral bathrooms. “As someone who uses the restroom, I wish cisgender people [those who identity as the sex assigned to them at birth] knew that gender-neutral bathrooms are intended for everyone, not just trans and non-binary students,” they said.

Willow, an ARHS alum who went by the name Xaq while studying here, said she identifies as transgender. Though she was assigned male sex at birth, she said,  “I knew I was a girl.”

Initially, Willow was labeled as gay rather than transgender. “I remember finding it very strange, how I was treated differently from my sister growing up,” said Willow. “I was very feminine but my family thought I was just gay… I knew from as early as age 4 or 5 that I was a girl and that I wasn’t [happy with] my body.”

In middle school, Willow started to come to terms with who she is. “I started to find other people who helped me to understand myself, and I realized that it was okay to be different, that I should celebrate and be happy with who I am.”

Willow claimed that anticipating coming out filled her with anxiety. “I was so excited to finally be free but at the same time I was so scared of rejection,” she said.

The process was smooth, though. “Everyone was so supportive. I guess I expected the worst so it was nice when it was a positive experience,” she said. “The whole thing was actually rather surreal.”

Jim (name changed) is a transgender student currently enrolled at ARHS. Though Jim was assigned female sex at birth, by age ten, Jim said, “When I met new people, I wanted them to see me as male.”

Jim said, “I knew I was male around seventh grade.” He then began the medical, physical, and emotional process of “transitioning.” As with many transitions, it was rough, but Jim has a very supportive family behind him.

In middle school, he first changed his name to a gender neutral name and then afterward to a common male name. Jim said it was really stressful when people called him “she” or used his previous name during this time period.

Jim described being transgender as “a person whose sex who doesn’t match their gender at birth and who feels the need to physically change themselves to project who they really are to the world…Gender is how you perceive yourself; it’s a sculpted identity.”

Now that Jim is male identified in the world, he said, “I actually don’t think of myself as a transgender person.  I just live my life as a guy because I am.”

No one around him treats him any differently than a cisgender guy. “I think most people in the school do not know [I used to be labeled female] or they forget,” he said.