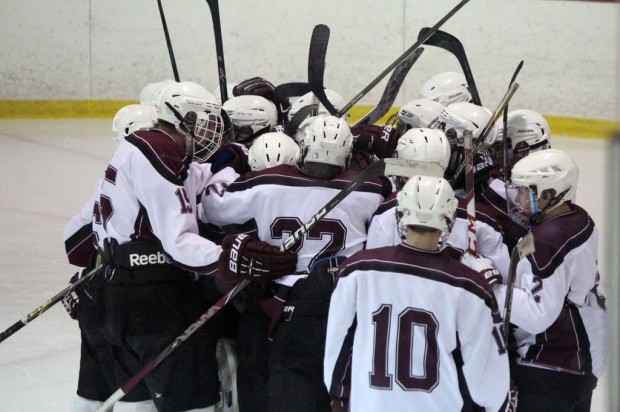 After losing many influential seniors from last year, Amherst boys’ ice hockey is off to a hot start this season.

The Hurricanes started the year with a crucial win over Chicopee Comp, the same team that knocked them out in the semi-finals of Western Mass last year.

Amherst hockey holds a record of 9-1-3 and is currently ranked fifth is Western Massachusetts.

Amherst Puck looks to build on last year’s success with only one goal in mind, bringing a Western Mass championship back to the high school.

“Anything less than that is a failure,” said Nathan Masteralexis, a standout junior forward.

“We don’t have any individual goals,” said Masteralexis. “We just want to win.”

Even without the need for individual recognition it is hard to look past the numbers that Masteralexis and fellow junior Jake Balderson have put up this year.

In the first three games, the two dynamic players each tallied five goals, many of which were assisted by each other.

These stats make Masteralexis and Balderson one of the deadliest duos in all of Western Massachusetts.

Even though the two have proven themselves as elite players, they still stay humble.

“It’s a team game,” said Masteralexis. “I wouldn’t be anywhere without my teammates.”

After losing most of their team due to graduation last year, Amherst hockey still keeps their familylike atmosphere.

That bond between players will hopefully push Amherst hockey into one of the best teams in Western Massachusetts.