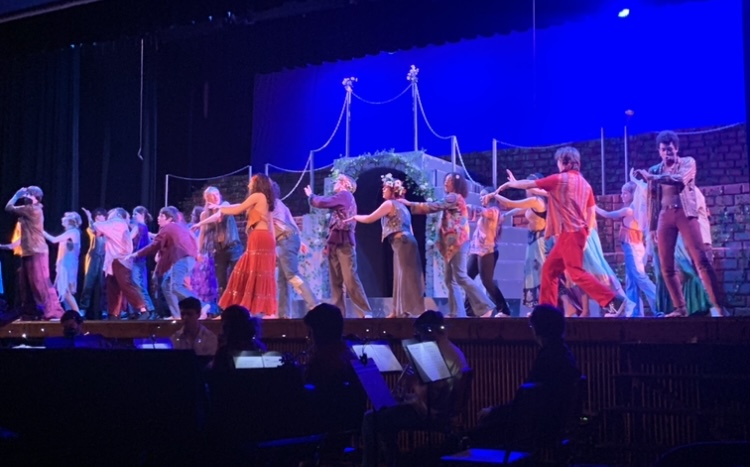 After having their last show canceled due to covid, the cast of Hair bounced back filling the stage with energy and joyfulness.

This year’s musical, Hair: The American Tribal Love-Rock Musical, featured many lively ensemble numbers in which nearly the entire cast was on stage, singing and dancing together while dressed in beautifully colored hippie clothing. The plot of the musical centers around anti-Vietnam War peace protestors and celebrates freedom, love, and pacifism.

The cast was almost entirely unmasked, which is typical in theater productions, even in the era of COVID; however, though nearly all were vaccinated and boosted, COVID-19 shut down their love-in after only two nights of performance on Thursday and Friday.

However, they were able to reboot the show after April break, running their final show on Friday, April 29 in the evening.

When the show was shut down due to the COVID outbreak, the actors took it hard. “As a senior, I was devastated,” said Kathryn Carvel who choreographed much of the dance in the show. “I put a lot of work, effort, and love into this show, and having it taken away at first was hard.”

Senior Phoebe Gibson said it may have started as a cold going around that people said was not Covid. “I tested all three days of the show and only came up positive on the last day in the morning,” she said, after assuming she just had a cold.

Devin Morton was sad that some extended family missed seeing the show. “We had family come in from out of town to see it and were really excited,” Morton said. “But ultimately I was super anxious Saturday morning thinking I’d have to perform again knowing everyone was testing positive so I’m happy we postponed it.”

Theater department head John Bechtold said it ended up being the perfect show for this moment of time, despite the disruption in performances.

“I loved watching a community of happy, joyful people form,” he said. “The pandemic has wiped out joyfulness for so many, so often, it felt wonderfully startling to see that energy back onstage.”