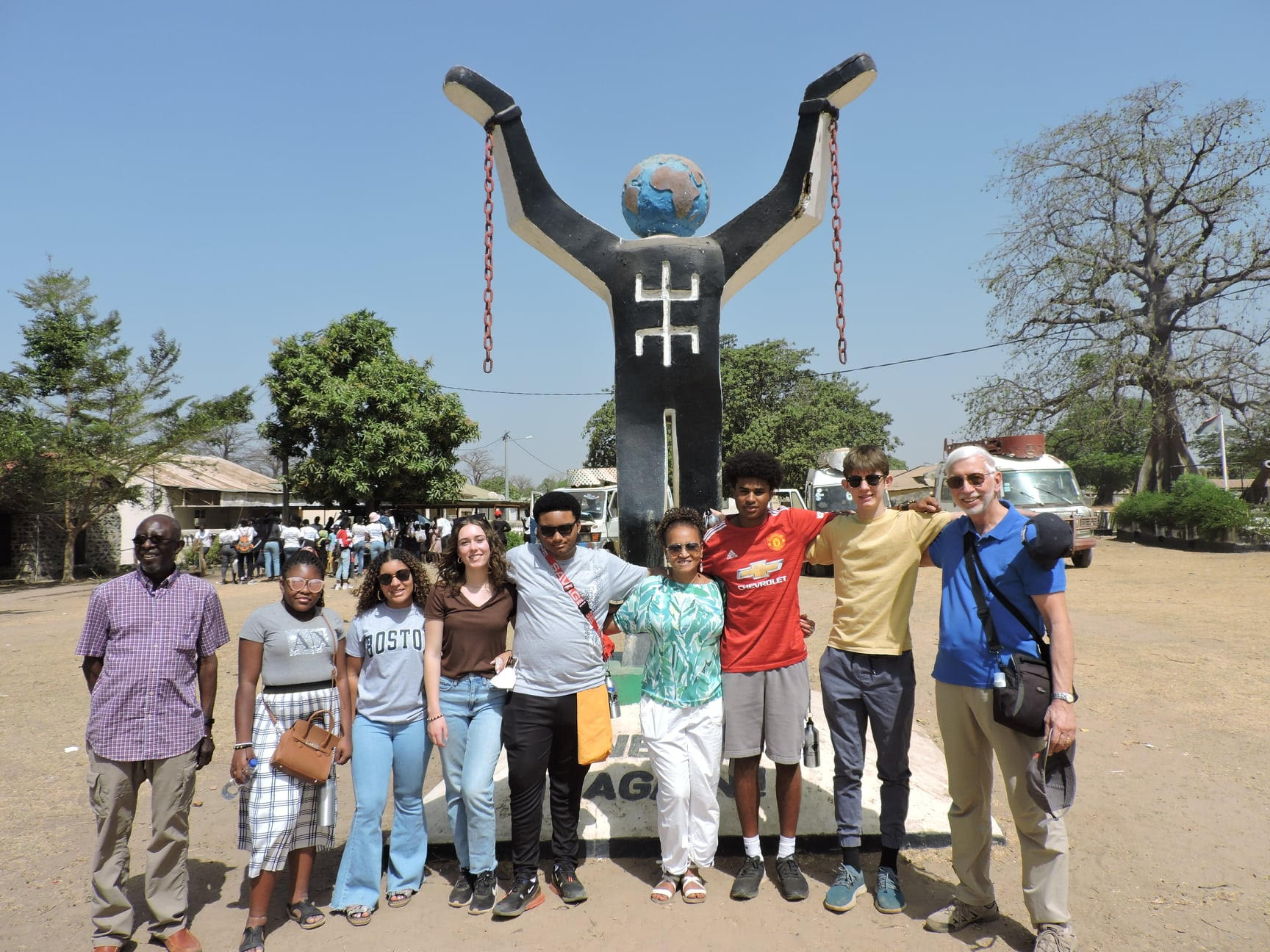 The Sene-Gambian Scholars on their recent trip to Senegal and The Gambia.

The Sene-Gambian Scholars Club trip to Senegal and The Gambia this February was a long time coming, since it had been postponed many times during the pandemic, and the club members and their advisors say it was the trip of a lifetime.

Leading up to the voyage, students prepared by fundraising, learning several phrases in the language Mandinka, watching films about Senegal, attending a presentation by science teacher Nick Shaw about The Gambia, and meeting with their advisors, Dean of Students Mary Custard, retired English teacher Bruce Penniman, and retired special education teacher Momodou Sarr.

A total of six students went on the trip— Phoenix Ferreira Ford, Joel Blandon, Ian Buchanan, Simone Robinson, Ava Mendelsohn, and Kimberly Maketa. Due to the delay, the club had extra time to raise money, which was funneled into a scholarship fund for those wishing to attend. ”We want to have access for all, and so some of the money is always geared towards scholarship,” said Ms. Custard.

The daily itinerary for the trip included at least one activity or field trip per day, including a multitude of different ways to explore both The Gambia and Senegal, as well as visiting many schools to donate supplies and make presentations for the kids there. The group was greeted with joyful welcomes wherever they went.

Many students cited the powerful impact of going to the island of Gorée, just off the coast of Senegal, opposite Dakar. From the 15th to the 19th century, Gorée was the largest slave-trading center on the African coast. ARHS students and advisors stood at The Door of No Return, which is symbolic of lives exploited and lost due to enslavement. It’s also considered a site of reconciliation. Custard said it was “very moving to be there.”

Students also went to markets to buy fabric for their own clothes, visited a Crocodile Sanctuary (where they were able to pet real crocodiles), visited Kunta Kinteh Island (an area linked to the West African slave trade, it is listed as a UNESCO World Heritage Site), and visited a Gambian women’s farm collective where they primarily grew onions and bitter tomatoes “to support The Gambia in decreasing the importation of those vegetables. The women working there took a break to meet us and answer questions,” said Custard.

They were also able to bring school supplies to schools they visited.  The school supplies came from Custard’s friends as well as fundraising from the club members. They donated four bags to one elementary school, a preschool, and two high schools. “That part was great,” said Custard. “I felt like we left goodwill at all those schools, because we were helping to educate their students too.”

They also provided an elementary school in Pambal, Senegal with a  projector, a speaker with mics, a laptop, and other school supplies.

Along with being able to help out schools in need, there were other important aspects of the trip, including “dispelling the stereotypes and myths of what Africa is, and learning what those two countries are really like,” according to Custard.

“I think something that all of us were attuned to, while we were there was all the privilege that we have here,” she added. “So many people take it for granted.”

In The Gambia, the village where the scholars were staying lost power at some point every day. So there were many days when the scholars didn’t know if they’d have power and rarely had WiFi, and they learned to use wells for water and outhouses for bathrooms. Also, there were no hot water heaters, so they got used to cold showers.

Since Custard could not send messages to the parents of the scholars or her family without Wifi, she covered the cost of Wifi for the family she was staying with.

“I wish that everybody could have the experiences we had on our trip,” she said. “I do think that even here in the USA, you may not have privileges others have, but you still have more than other people have in another setting. We should be thankful for all that we have.”

While staying in The Gambia, the scholars and Ms. Custard lived in a village with host families and got to visit local sites. In Senegal, the scholars lived with host families and the advisors stayed in a hotel in the city of Dakar and visited Joal-Fadiouth (an island made entirely of shells), a nature reserve, an art center, museums, a tapestry factory, restaurants, and more typical convenience stores.

They were hosted by the Cours Sainte Marie School, which is a private Catholic school in Dakar that has around 5,000 students from preschool to college.

All of the classrooms at the school are named after changemakers, international ones like Louis Braille, Mother Teresa, and Martin Luther King, Jr. The school focuses on peace education and has a mosaic in the courtyard that has the word peace written in different languages. Cours Sainte Marie School was awarded the UNESCO Prize for Peace Education in 1991.

The campus incorporated a lot of African cultures, including beautiful African paintings and sculptures. African music was central to students’ lives too. “As soon as the kids heard drumming, they just started to move, jump, and dance,” said Custard. “You don’t have to say, ‘Let’s dance. No, they’re already dancing. They’re already moving.”

On the evening of April 6, the Sene-Gambian Scholars presented all they had learned to the ARHS community (including family and friends) in a celebratory event in the cafeteria. Students highlighted their learning about West African politics, education, government, music, art, the environment, fisheries, gardening, native trees and nuts, fashion/fabrics, school uniforms, and more.

“Throughout my 4-week trip I was enlightened and immersed in a whole new society, culture, and environment,” reflected Robinson. “I learned about broad topics such as the government’s influence on their people and smaller topics such as domestic work in the house and family roles.”

“I came to Africa expecting to see traditional art that shared many of the same qualities. What I found, though, was a mix of different media, and a variety of color and canvases,” said Blandon. “The artwork ranged from spray paint murals at playgrounds to formal tributes to black leaders. I definitely left with a new perspective on West-African art.”

All of them said, in addition to these specific lessons, that this was a trip they will never forget.

The ARHS Sene-Gambian Scholars will welcome their Senegalese partners for a return visit from April 22 until the morning of May 1.  They are seeking hosts for four Senegalese girls that week. “Hosting is a life-changing cross-cultural experience, and in this case, it’s made easier by the fact that all of the Senegalese students speak English,” said Custard.

If you are interested or want to learn more, contact Mary Custard at custardm@arps.org or Bruce Penniman at pennimanb@arps.org