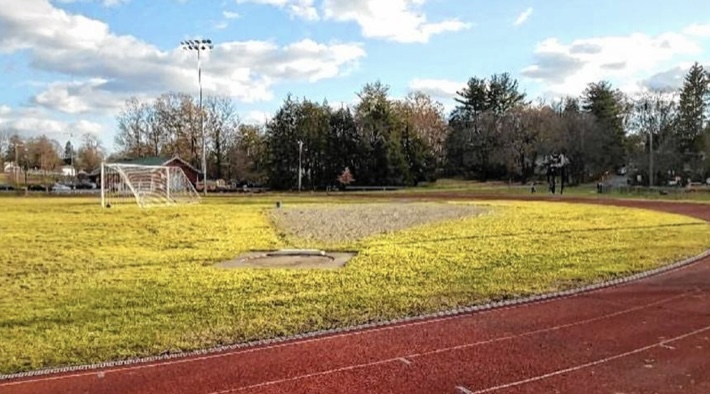 After over ten years of discussions about replacing the track at ARHS, the Amherst School Committee voted to finally approve it, but pushed off funding the project until at least January 15, 2023, while they see if they can make a go of the more ambitious renovation proposal.

School committee chair Allison McDonald said that the most basic and least expensive option is to replace the existing track in its current location. “The other two options involve relocating, reorienting, and resizing the track and field so that they are optimally sized and situated for athletic competitions and accessibility,” she said.

The committee’s vote on March 15 was to consider authorizing the debt of $1.5 million to support Option 3, the “relocate, reorient, and resize” option that also includes “installation of synthetic turf in the inner field.” The total estimated cost of this project is $4.7 million. This project’s funding would be contingent on a number of financial pieces coming together.

According to McDonald, if this plan were approved, $1.5 million would be raised by the regional school district “through debt with repayment assessed to each of the four regional member towns.”

The remaining $3.2 million would be raised through a combination of CPA grants (Community Preservation Act) from member towns, use of ARPA grant money that member towns received from the federal government, and through private donations (such as fundraising through youth sports organizations or Amherst Hurricane Boosters).

Hopes have been high since the school hired a Connecticut company in the fall of 2018 for a feasibility study to see if the project was possible.

Junior Juliana Shepard and sophomore David Pinero Jacome both competed in track and field events and are eager for this project to be actualized.

When Shepard is on the track, she feels unsteady. “There are so many cracks and bumps everywhere,” she said. “I’ve almost twisted my ankle many times.”

Pinero believes that a new track and turf field would allow our school to host bigger competitions. “It would engage more students in sports because it would be more appealing,” he said. “Not only that, but it might even bring more students to the school. It would be a safer place to get exercise, for my team practice, and maybe even someday to race on.”

Not only is the track used by high school athletes but it is enjoyed by the general public as well.

In 2018, The town of Amherst formed a working group to create a strategic Master Plan for a Community Field. The District then invested in developing a detailed plan and cost estimates for various options to improve the track, which were presented to the School Committee in 2021.

The School Committee finally decided to signal their commitment to Option 3 by voting now to approve the project, which would later help motivate fundraising efforts.

“What will be decided in January is whether we use the debt to fund Option 3 or if we [go with Option 1, replacing the track in the existing location. The reason we are waiting to make that decision is to allow time for fundraising in support of Option 3,” said McDonald.

“In January, we will know whether we’re able to meet our fundraising targets and will be able to make the decision about which project option we will pursue,” she said. “It is important that we not commit the District and our member towns to the more expensive project if we are not able to raise the additional funds to support it.”