Poetry Club is a slam 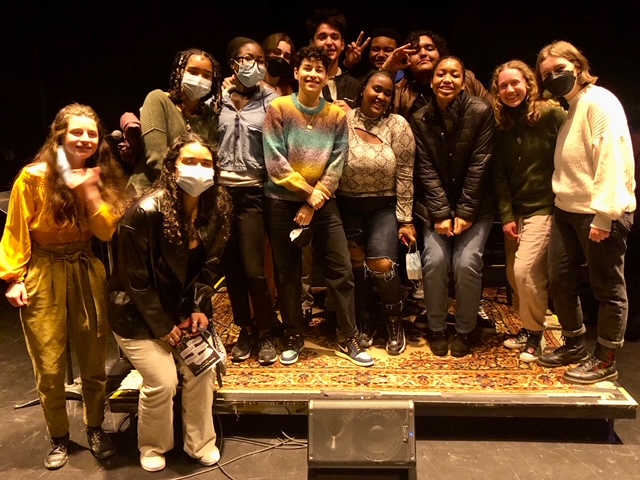 Students in Poetry Club with famed poet Denice Frohman at her reading at the Academy of Music.Photo: Kate Kuhn

Though students at ARHS have been interested in poetry for years, this year they finally have the chance to join a vibrant club devoted to nurturing their love of spoken word. The group formed after English teacher Kate Kuhn showed a documentary about poetry slams called “Louder than a Bomb” to her Contemporary Literature course, followed by inviting in a guest spoken word poet named Imani Wallace.

Students were so moved by these experiences that they asked if she would advise a poetry-based club. Juniors Adriana Lyra Brazao and Victor Cruz reached out to juniors Courtnegail Rose and Ihuoma Onyeukwu to get it rolling, and 10 more students soon followed.

Cruz said the club really nurtures the talent and voices of students of color, though it is open to anyone.

“I’m part of the Minority Student Achievement Network, and we often talk about the academic achievement gap but not a lot of people understand it. When we watched ‘Louder than a Bomb’ [it was inspiring] to see groups of kids who lived in the projects writing poetry,” he said. “They had at-home dilemmas, and they were struggling. Poetry gave them a voice to talk about their lives.”

Rose said it can “be hard to find a place to speak the way you feel,” but “poetry is an outlet for people who like to do that. The best part is it doesn’t have to make sense to anyone but you.”

Lyra Brazao said meetings currently consist of encouraging members to share their work with the club if they wish, having discussions, and engaging with writing prompts. “We let people read or perform anything they’ve written since the last meeting,” she said. “And we write things in groups.” They also watch a lot of slam videos.

Brazao and Cruz take the role of organizing the workshop and prompts for the week. But their hope is to get others to lead it, too, so that everyone “feels equal and involved.”

One of their highlights so far was attending an event at The Academy of Music in Northampton, where spoken word artist Denice Frohman, a queer, Jewish, Puerto Rican poet, performed. Students got to meet Frohman afterward and talk with her.

“It was an amazing show,” said Kuhn.

What differentiates spoken word from slam is that spoken word is a performance of one’s poetry, while slam “is like a poem contest, more competitive spoken word poetry, in which the audience judges who is the winner,” according to Kuhn.

The club hopefully plans to host both–a talent night to showcase their work annd a district-wide poetry slam. “Next fall, we are planning to host an open mic for local high schools at the Academy of Music, to attend a poetry slam in Boston, and check out some other performances around us,” said Brazao.

“I’m just in awe of what these kids can do,” said Kuhn, who said the group would also like to offer something in the high school auditorium. “There are a lot of juniors this year so they’re excited for next year,” she added, noting they’d be open to getting in touch with the middle school club to join forces.