Lewis talks first semester at the helm in English classes 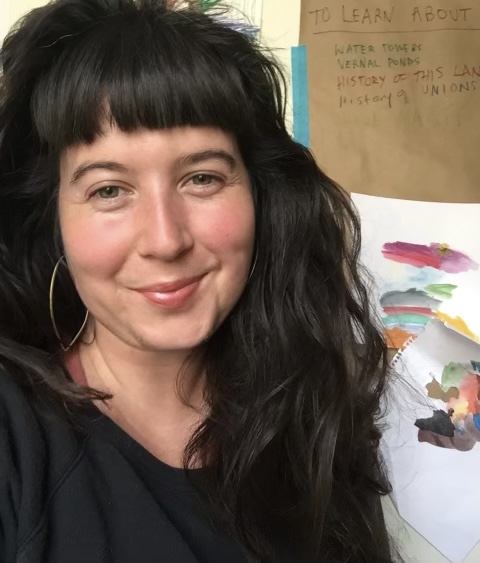 Amanda Lewis is the newest member of the English department.

On Friday, January 14, 2022, I had the privilege of interviewing Amanda Lewis, a new English teacher at ARHS. Her story interested me because previous to this year, she was a paraeducator working in the Writing Center and later, the Academic Achievement Center (AAC) at the high school and she is starting her career as a classroom teacher in a pandemic. She is currently earning her master’s degree in education at UMass while teaching in the English department.

AP: What are the classes you teach? And what is a typical day like for you?

AL: I teach LGBTQ Lit, and tenth grade English and this is my first year teaching. I have an extra big soft spot for the students that I have right now because it’s like my first semester, so they’re the first group of students whom I have taught. I had LGBTQ lit A period [first semester], and then I had two sections back to back of tenth grade. My C period tenth grade class was really high-energy, and then my D period class was quieter. I teach three out of four [periods, which is] the standard teaching [schedule].

AP: Where did you grow up and study?

AL: I grew up in Beverly, Massachusetts and I went to Smith College which is how I ended up in Western Massachusetts. I studied philosophy, not because I love philosophy but because I was a big commitment-phobe. I was interested in creative writing, so I was doing a lot of writing. And when it was time to declare a major, I just wanted to do creative writing classes. [But] that wasn’t an option. So I chose the major I was most close to being done with, which happened to be philosophy.

AP: Did you go to grad school before teaching at ARHS?

AL: My journey to teaching has been a little bit clunky. I started as a paraeducator, so this is my first year as a teacher. I was hired to run the Writing Center back when Mark Jackson was the principal. There was a priority at the school around writing support so I did full-time writing tutoring for three years. Then the Writing Center was shuttered so I was switched into the Academic Achievement Center to offer student support with paraeducator Alyssa Ranker, which I loved. And then this summer, a one-year position came up, to fill in for English teacher Matthew Despres while he is on parental leave. I’ve been going to grad school for the past year and a half at UMass while holding that position, so I’m still working towards my professional teaching license. I was able to secure a COVID emergency license. After a semester filling in for Mr. Despres, I applied for a permanent position in the English department [to fill the shoes of retiring teacher Elizabeth Bull] and I got the job.

I used to be able to feel my own frustration when I was in a rough class, and I didn’t feel like my time was being respected or when I was in a good class, and I was like, ‘Yeah, I’m really learning something!” So being a teacher now, I’m ]even more] tuned into that. I think students’ time is super valuable and [I want them to have a good experience].

AP: Why did you decide to work in education?

AL: I think that teenagers are awesome and weird and brilliant, and their voices are undervalued. So I was excited about becoming an English teacher because I really like storytelling and reading and writing. But, I also really like talking about power and relationships and how the world works. I like thinking about the tools that we have to describe the world around us, because these tools shape how we interact with the world. I think a lot of the literacy skills that we build in English classes are really supportive tools for thinking about how we move in the world. How are our relationships? How do we think about power? How do we think about voice? How do we get a voice when we feel like we don’t have one? And I like the energy of being around young people. It’s also complicated. Schools are not built for everyone to be successful. Schools were designed to train new workers, not for people to explore what they actually are interested in. Honestly, I feel confused and curious about schooling. It’s an interesting thing to think that schools are [problematic], and also to really want to be in educational spaces with young people. Particularly [during] the pandemic, it’s like, ‘What are we doing here?’ I hope that the pandemic brings a major reckoning. People have been saying this for a long time, particularly folks who don’t feel and have never felt served by the educational system, but I think the real question is, ‘Are we actually going to make any changes?’ And I feel excited to be a part of that.

AP: [As] this is your first year teaching, who have you been able to rely on this year for in terms of materials and lesson plans?

AL: The English department has a pretty organized curriculum, so I’ve been really lucky to be working with [what] the department has developed. In terms of people who have really mentored and supported me, I feel very grateful to Kristen Iverson and Sara Barber-Just. Also, Ms. Ranker, who I get to collaborate with at school all the time.

AP: What other jobs have you had?

AL: I’ve had lots of other weird jobs. I was a bartender, I worked in food service, [and] I worked at the Museum of Science in Boston, as an exhibit developer. When I graduated college, I knew I wanted to be in education, but I thought that I wanted to be in museum education. I worked on this big exhibit about Pixar. My day at the Museum of Science was wild. It would be like, ‘Okay, I have to mail 20 tiny ceramic chairs to LA to the Pixar studio’. I also did weird things like maintaining the taxidermied bird collection and budget. I had a really cool boss at that job; her background was in research and evaluation, and she was really interested in accessible design. So, I coordinated and managed this accessibility committee. [We thought] about how to make the museum more accessible for visitors with disabilities. When you think about a science museum, so much of it is like, ‘What do you touch? What do you see?’ And so we [thought] what are different ways for people to be able to interact with exhibit components? So we [had] a lot of tactile stuff.

AP: What are your hobbies and what do you like to do in your free time?

AL: The first year of teaching has been time-consuming and hard, but I have been really involved with a community bail fund. I have been working [on] bailing out people who are held on low bails in Western Massachusetts. I also like to write fiction. I write mostly short stories. I have one published piece. Publishing was a dare by someone. So I did it. I have a piece that’s published in a little magazine called Calyx. I also just really like to walk. I need a lot of walking in a day to feel okay.

AP: What are some challenges with your job?

AL: I had a hard adjustment coming back in person, because I can only go to the bathroom for four minutes in the middle of a passing period. I liked having more freedom over my body. [Also] I’m learning how to manage my time.

AP: How did your job or life change the pandemic?

AL: It changed in a lot of ways. Recently with the Omicron spike, it’s been hard to be isolated, because my friends don’t work in person, and they are kind of like ‘you’re super high risk. You work in a school I actually can’t see right now.’ So, my partner was staying with me and then they went out to LA. They’re an artist and they have an opening in February. So they’re out there doing pre-install. [After] they went away, most of my friends were like, ‘Hey, we love you. We can go for walks outside, but we can’t hang out inside until the spike goes down because of school being [a] high risk.’ It’s been a big adjustment to not see anyone very much anymore. And so I feel cautiously optimistic that hopefully [numbers will go down] in February, that I’ll be able to see my friends inside again, because it definitely is hard. And I don’t like being mask police for students. Yeah. But my students, the students who I’m around have been extremely respectful. And I feel very grateful for that.

AP: What are some of your likes and dislikes?

AL: I really like meeting new people. I get a lot of energy from interacting with new people. I just turned 30, and one thing that’s been really interesting is just learning how much I need unstructured time in my day to feel like I’m doing something that I want. I try to wake up early and have a half hour where I drink my coffee and do whatever I need to do. Whether it’s draw[ing] or, [going on] my phone or, making a really nice breakfast. Then I go on a walk on my way to school, and those are two things that really make me feel like I’ve had a day that I took care of myself before I come to interact with people. When you’re teaching there’s like 80 people in a day who want a different thing from you at the same time, and it’s been cool for me to practice and learn how to prioritize what’s important and what’s not important and to hear people’s needs so that they feel validated. I also really love swimming. [My] dream day would be to wake up, go on a really long walk, make a picnic, and go sit in a river with a friend and have the picnic inside of the river.