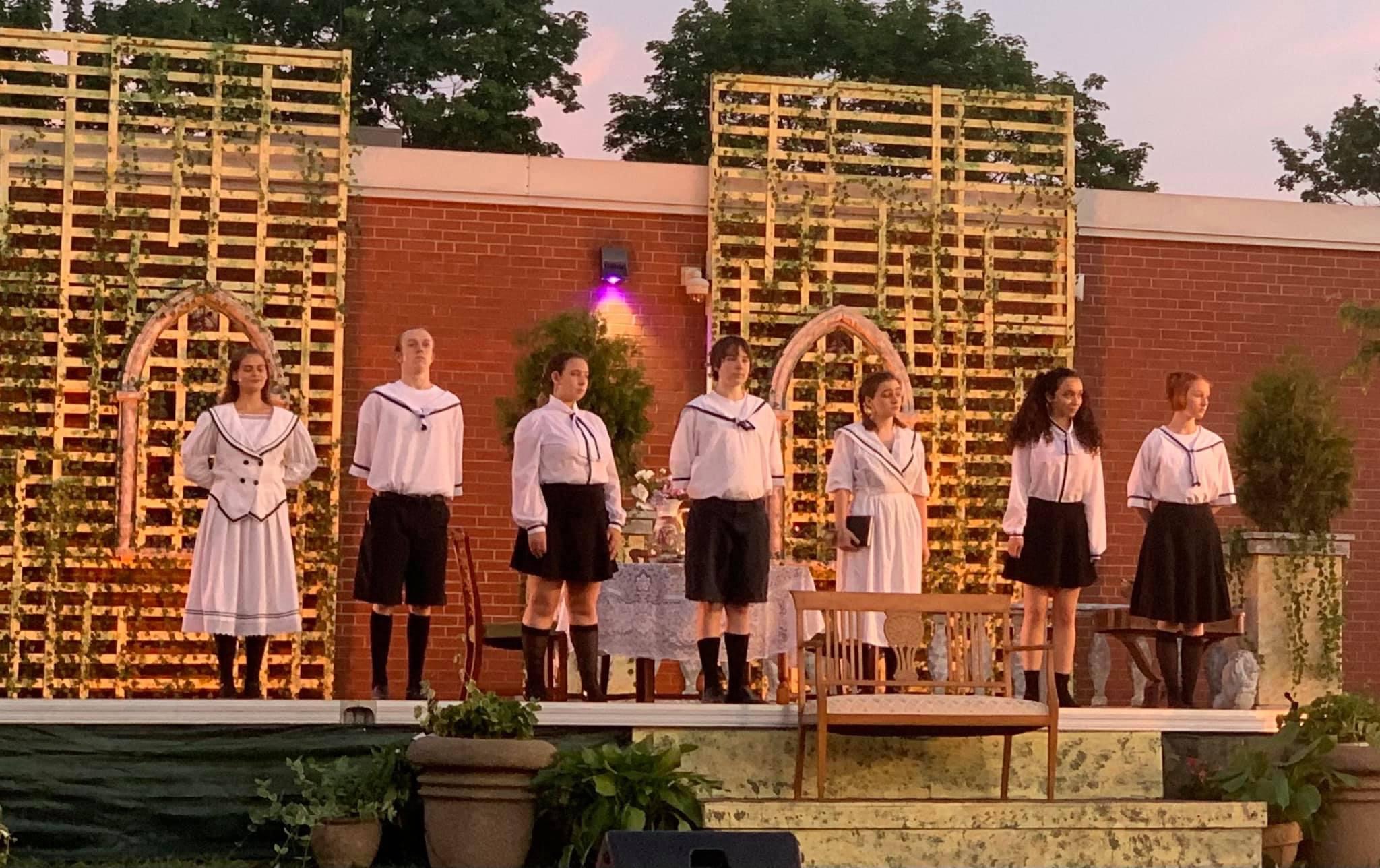 The VonTrapp family children, from The Sound of Music, performed outside at ARHSPhoto: Mary Custard

These noises were all a part of the ARHS Theater Company’s work to not just put on a production of Rodgers and Hammerstein’s The Sound of Music but to build an outdoor stage and set to showcase the work of the actors and singers, making it a COVID-safe production.

The classic story revolves around a nun, Maria (played by Samantha VanHorn), who is sent to be a governess to the strict Captain Von Trapp’s seven children. Maria teaches and introduces music back into the Von Trapp home, all with the background of an Austrian countryside.

“[This show was] the perfect reentry out of the pandemic,” said assistant director and special education teacher Emily Pritchard.

The transition to an outdoor musical, especially during a pandemic was challenging, and “the hills did not always feel alive with the sound of music,” noted both director and performing arts department head John Bechtold.

“Everything was harder,” he said. “It doesn’t matter what corner of the show [you’re in], there’s twice as much work to get something to happen.”

According to senior and co-stage manager Mariam Ahmed, a lot of show processes were changed to accommodate the pandemic.

“You can’t be handing costumes back and forth [anymore]. Make-up and hair [have also] changed,” said Ahmed. “[You have to] support other leaders while they’re figuring out how they’re going to go about doing their jobs.”

Not only were the logistics incredibly tough, but so was the creative process, as well as the emotional difficulty of interacting during a pandemic. “Having to adapt to finding different creative ways to get into the work together while going outside and wearing masks was challenging but also rewarding,” said Pritchard.

Bechtold also noted the social-emotional levels of students changed since the beginning of rehearsals. “[In the] first weeks we had people that were a little distant and unsure of what this show meant and how this show felt to them,” said Bechtold. “Bit by bit rehearsals got more fun [which is] more what we’re used to.”

The status of whether the actual musical was going to happen was shaky until the end of March, and getting the green light to do the show was another difficult task. “[We had to be] explicit about our policies and approach and our respect for science,” said Bechtold. “What helped a lot [was having] a school administration and a superintendent that were very willing to back us and trust us.”

While the need for a musical was essential to many students, many seniors in the production were especially vying for one last show to finish off their high school careers.

“Theater has been such [a big part] of my high school journey,” said senior and co-head costumer Morgan Brennan. “Imagining my senior year without the opportunity to lead costuming and not being able to make a show and share it with people [is] very devastating.”

Even if the pandemic changed many aspects of the musical, there’s still one thing that hasn’t changed. “The spirit of the musical was very much alive,” said Ahmed. “It still had all of the grandness that it has every other year.”