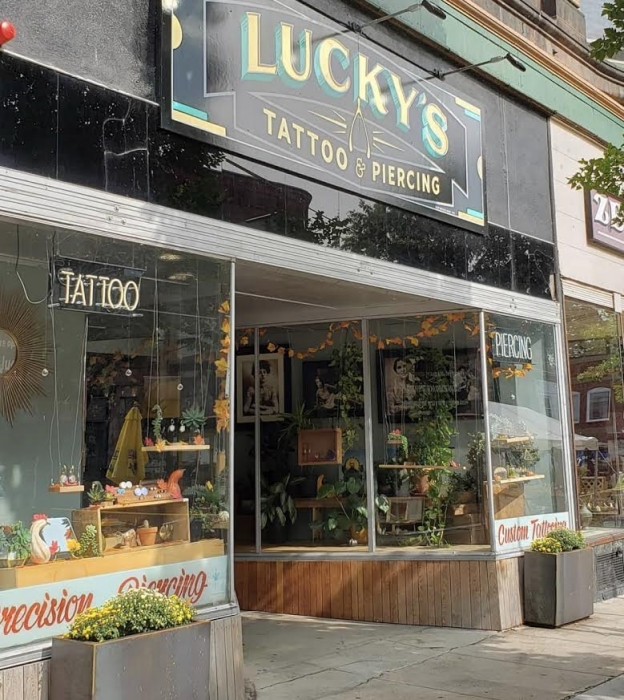 Ian Juras got a tattoo at Lucky's in Northampton, Mass.Photo: luckystattoo.org

The pandemic was a time for introspection and self-reflection. This caused many people to think about their image and consider new ways to express themselves. Others were searching for ways to regain confidence after an extended period of time spent alone.

Enter tattoos and piercings, a way to adorn the body and make a statement. According to Google Trends, tattoo searches are up 48%. Not only that, but in an article entitled “There’s a Reason You Desperately Want a Tattoo Right Now,” on Refinery 29, tattoo and piercing artists from Beverly Hills, New York’s Hudson Vally, and California’s Bay Area said they saw an increase of booking requests of up to 150%.

ARHS seniors were among those who took the leap on piercings and tattoos. Ana Lewis decided to get a pandemic belly button piercing. “I thought it would look cute,” said Lewis, who noted she “didn’t really like” her stomach before and thought she might like it more with a piercing; she does.

Ian Juras got six tattoos and four piercings in the pandemic, which he paid for with money earned working at Target. “I’ve spent roughly eleven hundred dollars on all of my body modifications over this pandemic period,” Juras noted.

To ensure a safe piercing, the metal that is used in the jewelry must be gold, or implant grade titanium, which can be pricey. “My skin is really sensitive so the cost of high-quality jewelry was expensive,” said Lewis. “Along with the cleaning spray [my belly button piercing] cost roughly one hundred twenty dollars.”

Often the thing that causes people to shy away from tattoos is the potential pain it may cause. Having a fear of needles is common, and some work past it because of their desire for body art. “I hate needles,” said Lewis, “so the worst part for me was the piercing part.”

Finding a piercer or a tattoo artist involves a lot of research. There are several things people must look for including, artist style, credibility, and location. “I got mine done in Northampton and Hadley,” said Juras, who used Charles Rouse and Brynn Walker from Lucky’s in Northampton and Rick Beaupre from Blue Print Gallery in Hadley.

Each piercer and tattoo artist are different in that often they specialize in specific piercings and specific forms of tattoo style. Lewis went to Haven Body Arts in Northampton. “I had gotten piercings there before and liked it so that’s where I go,” she said.

Tattoo and piercing shops put in place lots of safety protocols during the pandemic. “Only two people were allowed in the shop at a time,” said Lewis. “I had to screen for Covid before, and I had to be there at a certain time and leave at a certain time.” Covid screenings before appointments included several questions regarding whereabouts in the days leading to one’s appointment, and if they had any symptoms of Covid.

When asked if they would continue to self-adorn in the years to come, both were enthusiastic. “I will definitely continue to get piercings and tattoos throughout my life,” said Juras.