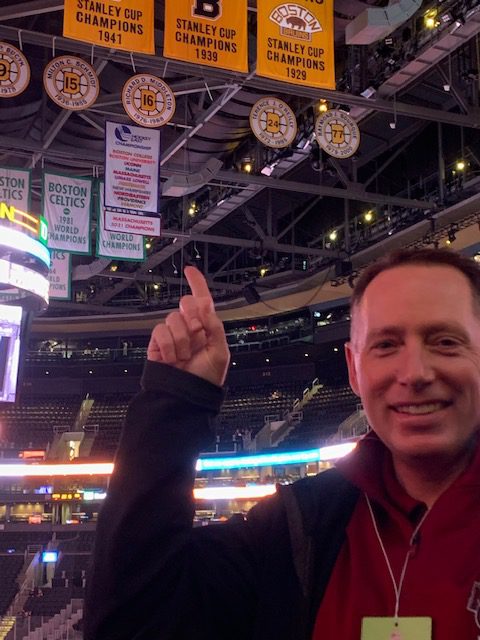 Greg Carvel, head hockey coach at UMass, has had an amazing year. Under his direction, a once-struggling team came back to win Nationals, and devoted UMass fans were thrilled to have him as their commencement speaker. I sat down with Carvel to talk about his journey to this place, his life, as well as his coaching and life philosophies.

Before moving to the area, Carvel spent his life immersed in hockey; he was playing hockey by the time he was five. As a teen, he received a division one scholarship to St. Lawrence University. He was later drafted by the Pittsburgh Penguins where he played center.

As a player, Carvel was very responsible defensively and played with his “mind,” because he wasn’t a very large player. Carvel not only had the highest GPA on the St. Lawrence team but was also the leading scorer. He admitted that he played the second half of the season his senior year with a torn hip labrum.

“I knew that playing wasn’t going to be my career,” he said.

Now, in his coaching role, Carvel advises people to “dream big” about what they might accomplish. After he achieved his dream of playing division one hockey, he said he “had no image in his mind to work towards while playing professionally.”

When no longer a player, Carvel wasn’t sure what he wanted in a career, but he knew that he wanted to stay connected to hockey in some way. He ended up teaching English and coaching hockey at Canterbury prep school in New Milford, CT for three years.

Next Carvel worked as the director of hockey operations for the Lowell Lock Monsters (now the Binghamton Devils), a team playing in the AHL (American Hockey League). This league is the main developmental league for the NHL.

According to Carvel, his job involved “a lot of marketing and sales.” At the time the Lock Monsters were affiliated and “worked closely with” the NY Islanders, a team in the NHL. Carvel was there for two years.

Moving forward, a friend recommended Carvel for a position with the Mighty Ducks of Anaheim, now the Anaheim Ducks. This was a tough decision for Carvel to make because his wife was in grad school and he would be working on the other side of the country, but he took the leap. While Carvel was there he was both the scouting coordinator and the assistant general manager.

“Every weekend I would fly across the country doing scouting,” said Carvel.

During Carvel’s first year in Anaheim, the Ducks made it to the Stanley Cup Finals for the first time and lost to the New Jersey Devils.

There was a lot of staff turnover, and eventually, Carvel moved on and became the assistant coach of the Ottawa Senators. During Carvel’s second year there, the Senators made it to the Stanley Cup Finals for the first time since 1927. They lost to the Ducks, the team that Carvel had just left.

Carvel worked in the NHL for 12 years before he lost his job. With only a month left on his visa, Carvel started applying for jobs he thought he would be a good fit for. Unfortunately, he didn’t get any of them. “It was a very trying time for my wife,” said Carvel.

Eventually, he returned to his alma mater, St. Lawrence University, where Carvel was the assistant coach for one year until the head coach, his former coach, had to retire due to some health issues. Carvel stepped in as head coach.

In 2016, Carvel was heavily pursued by our own UMass Amherst. “At first, I was reluctant to go, but in the end, I decided to leave St. Lawrence University because it was a division three school with division one hockey. UMass provided better resources and had the capacity to be a good team,” he said.

Once he was in Amherst, the support that he received from both the University and the town affirmed his choice to move. Carvel said was able to hire talented staff, and they pushed each other to be better. “We brought in high character young men and held them to high standards,” said Carvel.

They were building “not only a hockey team, but a family.” Even though Carvel’s team had the highest average GPA of any athletic team at UMass, the men that they brought in weren’t all initially top notch students. Because of the standards that he and his staff held them to, and the environment that they had built, “the borderline kids ended up doing really well,” said Carvel.

The next year, the team won 21 games out of 34, but the national tournament was cancelled.

This past year, Carvel’s team won 20 games out of 29 and then became national champs.

When asked about his plans for the coming season(s) now that his team is number one, Carvel acknowledged that staying on top will be harder than getting there, but possible. “I don’t know what we’ll be able to do, I just know what I do,” he said.

Carvel emphasized that he is just one of the many talented individuals who worked together on the team. “I’m really proud of what we’ve been able to do,” he noted.

He also recognized that UMass students and alumni don’t have much to cheer about when it comes to sports, and he was thrilled that he was able to give the UMass family something to be proud of.

Carvel credits four coaches he has worked with in his life with bringing him to this point.

The first is Jeff Kozak, “a very intelligent man with very high principles,” said Carvel. “He has the highest integrity of any man I’ve ever met.”

The next is Joe Marsh, who Carvel had both played under and coached with at St. Lawrence University. Marsh was a very emotional coach. “He learned how to get the most out of players,” said Carvel. Marsh would bend over backward for his players, and Carvel learned how powerful it is when a team “wants to go through a wall for the coach.”

Next is Mike Babcock, who Carvel worked with in Anaheim. Babcock was a very intense coach, and Carvel learned from him “how important it is to be prepared.” They would always practice with intensity and it would show when they played. “The team takes on the personality of the coach,” said Carvel.

Bryan Murray is the last coach that Carvel said he draws inspiration from. Carvel worked with Murray at both the Anaheim Ducks and the Ottawa Senators. Working under Murray, Carvel learned about the relationships between coaches and players, and “how to treat players well and take care of them.”

Carvel has truly learned from each of these coaches and has melded their teachings into his own coaching style. “As a coach, I am very intense, very passionate, competitive, and well prepared,” said Carvel.

Learning from all the great mentors he’s had in the past, Carvel believes that to live fully we must not “be afraid to make bold decisions.” He also believes that he has done that.

“At the end of my life I’ll be proud of myself for challenging and proving myself,” he said.