By Clara Lopez and Mildred Orellana 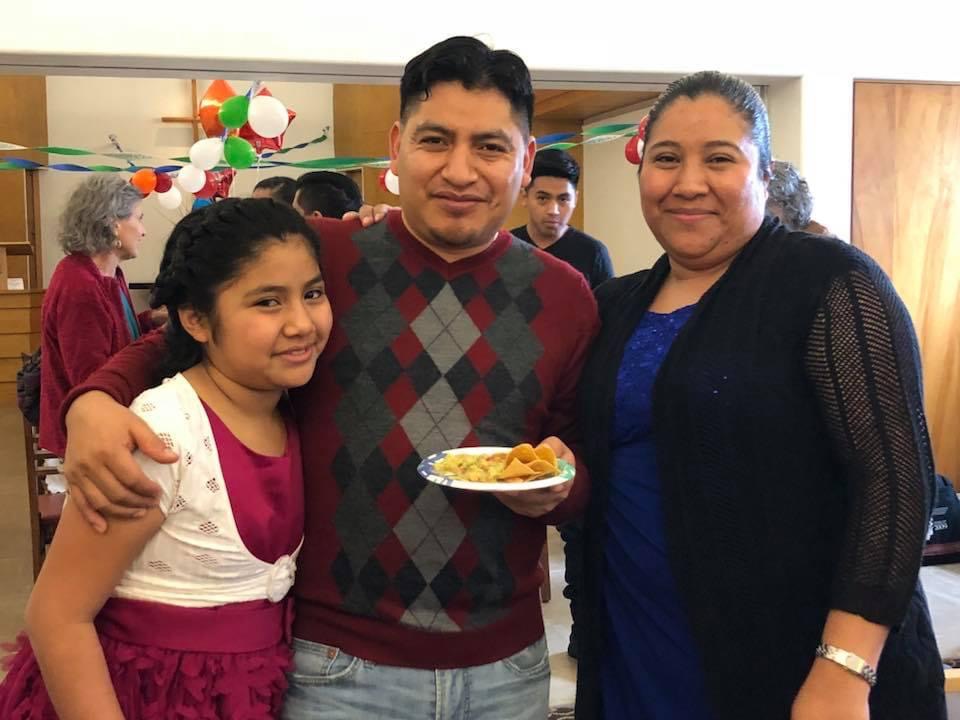 Lucio Perez, with his daughter Lucy and his wife Dora, at a birthday party held for him during his many years of sanctuary inside First Church.Photo: First Congregational Church

After three and a half years, in March of 2021, Lucio Perez finally left sanctuary at Amherst’s First Congregational Church, without the threat of being deported, and returned home to his wife Dora and their four children.

Perez left Tacaná San Marcos, Guatemala at age 17 in 1999 to make a better life for himself in the US. He found work as a landscaper and lived in Springfield, Massachusetts with his thriving family.

But a decade later, in 2009, he was charged with child abandonment after stopping at a Dunkin’ Donuts and leaving his kids in the car for a few moments while buying coffee. The charges were later dropped but this incident led ICE to monitor his movement as an undocumented person.

During Perez’s first check-in after Donald Trump’s election in 2017, he was ordered to immediately leave the country without his family and was denied a stay of deportation.

In 2017, Pastor Vicki Kemper of First Congregational Church, along with her congregation, opened their doors to shelter Perez, since ICE does not make arrests at “sensitive locations” like churches, according to The Daily Hampshire Gazette. Perez lived in a room in the church basement for all of the 3.5 years, with scheduled visits from family and the constant companionship of church members.

We interviewed Perez by phone just weeks after he returned home. Our conversation took place solely in Spanish, and his quotes, stories, and responses are translated here.

“It was very difficult to [initially] come to this country, but because of God I was able to get here,” he said. “It wasn’t easy.”

But sanctuary was even harder. He recalls never having imagined being apart from his family for three and a half years.“Everything was different,” said Perez, “[Before], I could work without fear when I had freedom.”

Perez met his wife when he was sixteen years old at a church in Guatemala. When he took sanctuary in the church, he only had the opportunity to see Dora once a week and they also communicated by phone.

Perez had several lawyers who tried to help him apply for a state of removal; immigration repeatedly denied the request. “Yo siempre decía, una prueba mas,” said Perez. (I always said one more try).

When he felt “weak” or received bad news, he would turn to God for strength and he prepared himself to face any situation. He felt reassured that “if it was out of his will, God would do it in his time, not mine,” said Perez.

Although Perez was able to see his family a couple of times a week, it was hard for him to adjust to this new reality; he constantly worried about his family and children. “It was very difficult. My overthinking resulted in more problems,” said Perez.

Upon Perez’s arrival in sanctuary, he found himself focusing on the negative aspects of his situation. During the beginning, he wrestled with sleep. According to Perez, the church provided a physical exercise coach who encouraged him to work out to tire himself out. “Not even that worked,” said Perez.

According to Perez, he still learned to never give up during difficult times and that “hope can never be lost,” lessons he wanted to pass on to his four children. “If someone ever needs a helping hand, I tell my children to not forget where they came from and their purpose,” he said. “I tell them that life is not easy but you should always fight no matter the circumstances.”

During Perez’s stay in the sanctuary,  he had the opportunity to meet and converse with scores of students from the UMass, Amherst College, and other local universities, when students would come to interview him. During those moments, Perez felt happy.

Another memorable experience during his stay was when a teacher he met who had visited Guatemala asked him if he knew how to make barriletes. In Guatemala, barriletes are big colorful kites that are used in cultural events to express the vibrant traditions of Guatemala and are also commonly made by young children to play with.

Perez said he did know how to make them, and the teacher brought her students to the church for a barrilete event, where they all made the kites together. At the end of the event, the children sang a song to him. Perez said their appreciation brought “tears of joy” to his eyes.

Perez often cooked in the small kitchen in his room for himself and he helped the church provide food for homeless people at the adjacent Not Bread Alone Soup kitchen throughout the week. During his stay, he spoke Spanish with others who wanted to learn. “I would have company 24 hours a day there. We spent our time talking, singing, we did everything,” said Perez. “There were lots of good moments.”

These moments of joy were reassuring for Perez, especially during his state of constant distress and anxiety. He felt solitary even with company, but he found strength through his faith in God during this difficult phase in his life.

When he looked around and looked at the walls surrounding him the idea that he would one day leave motivated Perez. “With the help of others, I made it,” said Perez. He said sometimes others advised him just to return to Guatemala as the years wore on, rather than waiting it out, but he had hopes he could someday return to his family.

Although he grew up in a Christian environment from a young age, Perez claims his faith genuinely grew during sanctuary at  First Congregational Church. “I went to church with nothing but one foot in. But when I got there, I became closer to God which is when I saw the glory of God manifesting himself in my life,” said Perez.

Perez and several members of the church continuously encouraged each other, especially with respect to their faith.

Perez said that when he notices himself losing faith, he asks God to give him strength, encouragement, and a reminder to confide in God especially during challenging times. “We know that without faith, it is impossible to be with God,” said Perez.

Perez also spoke about the current racism in the United States through a religious lens. ”Whether we’re black or white,” said Perez, “we’re all equal through God’s eyes.”

Perez states that like him, most immigrants do not come to the United States to harm anyone or “steal” any jobs. “We come here to work hard,” said Perez.

The fight continues for immigrants in similar situations as Perez who simply would like to be allowed to work in peace. “Although [some people] don’t want us here, we do not depend on men, we depend on God,” said Perez.

He is currently settling back in at home and is excited to have the opportunity to support himself and his family again.

Perez hopes to share the message that young people should continue to support their community, especially those who are in need as a result of difficult situations. When Perez first got home, he was delighted to be with his family and to take care of his wife after a surgery she recently had.

He is extremely grateful to those who helped him during sanctuary and to those who still continue to support him.

“I feel like a bird,” Perez said. “Imagine a bird in a cage. It doesn’t have the freedom to go where it wants, but when it is free, it can fly to wherever it wants to be. Now, I am free.”