Nakos talks thrash: fist-shaking music to ‘bring down the establishment’ 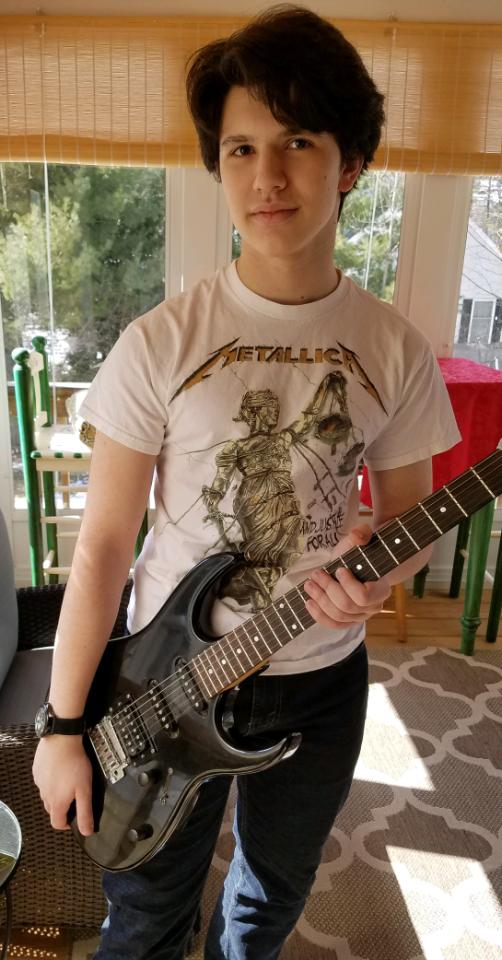 Nakos Maroudas, pictured at home, with his guitar.

Sophomore Nakos Maroudas believes the “best form of rebellion is music.” That is why he started the thrash metal band Defcon: Dead.

You may have heard his call for band members via the morning announcements at ARHS. In them, Maroudas asked, “Do you like metal music? Do you play an instrument? Are you looking to join a band? If you play electric guitar/bass, drums, or can sing in the style of thrash metal/hardcore punk, contact Nakos Maroudas to audition. Our band is called Defcon: Dead, and we could use a few more musicians to help bring thrash back to Hurricane Nation!”

For those unfarmiliar with thrash metal, Maroudas describes it as mix of British heavy metal and American hardcore punk with fast tempos, aggressive sounds, and often political lyrics.

Maroudas got into thrash metal for a variety of reasons. He said he is able to “call the idiots idiots” in his music, and his lyrics are a way to “speak out without worrying about offending anyone.”

In middle school, he said he sometimes felt like a “ghost in the halls” or a square peg in a round hole. Instead of becoming violent, Maroudas picked up a guitar and channeled the emotions he felt into music.

Despite the aggressive music, Maroudas is really a sweet young man, and said it is often the case among those in the metal community that “the anger in the music and the musicians themselves often could not be more different.” He said “once the leather and denim and studs are stripped away, there are a lot of sensitive, caring people who understand what it is like to be the outcast or underdog.”

This is what drew Maroudas’s bandmate, ARHS freshman Zeke Douglas-Rosenthal who plays rhythm guitar, to the thrash-metal scene.

Although their band is currently a two-man operation, Maroudas has put feelers out there in hopes of one day putting together a four or five person band.

Beyond simply making music that turns “emotions into perceivable things,” Maroudas hopes to eventually be playing in small clubs and to continue to make songs that urge people to “shake their fist in the air and bring down the establishment.”

Despite his love of metal, Maroudas is somewhat discouraged at the sterility of the thrash metal scene in Western Massachusetts. He said the area’s focus is on another subgenre of metal called metalcore, a combination of “pop, metal, and punk,” of which he is not a fan.

Perhaps Maroudas will be the first to popularize thrash metal in this area; his passion for the music is undeniable. He said that “playing guitar is a feeling nothing else in my day can live up to, I can express myself without anyone judging me.”

Those who are interested in learning more are encouraged to contact Maroudas in person or via school email. In the meantime, he urges all metalheads out there to reject the mainstream and “stay metal.”