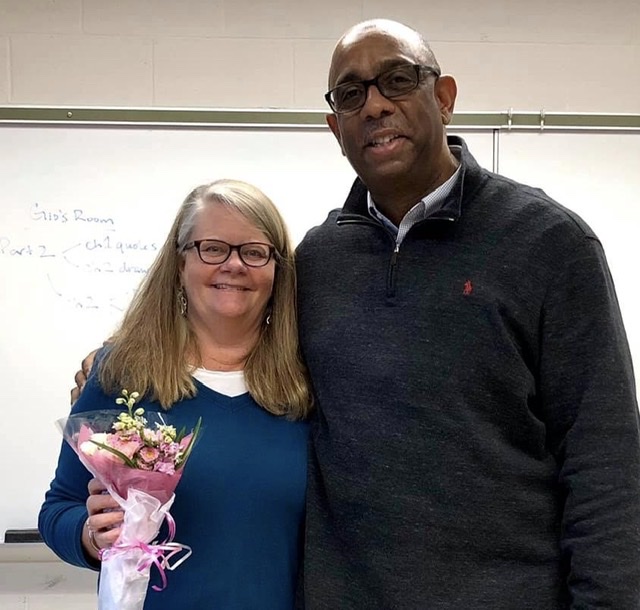 ARHS English teacher Kristen Iverson was awarded one of this year’s Pioneer Valley Excellence in Teaching Awards, given by the Harold Grinspoon Foundation of Western Massachusetts.

According to the foundation, the award honors “outstanding Western Massachusetts educators in Franklin, Hampshire, and Hampden counties and seeks to motivate teachers at all stages of their careers to aspire to excellence.”

Iverson will receive an award plaque, two tickets to a private gala reception, course tuition at participating colleges/universities, a one year membership to WGBY, a limited time membership at a YMCA and the Springfield Jewish Community Center, and a check for $500.

When I got the chance to sit down with Iverson, she said she “was very surprised but excited” to be awarded with this honor.

Iverson earned her bachelor’s degree at Occidental University in California and her master’s degree from UMass. She has taught at ARHS for 23 years.

When asked what she loves about teaching, she immediately spoke about “the curiosity and enthusiasm of teens.”

“I like to teach about the world and make it a better place,” she said.

English Department Head Sara Barber-Just said that is Iverson’s strength. “She walks the walk of a social justice educator every single day. She has taught four sections a year of African American Literature for over two decades, balancing complex curricular goals with even more nuanced conversations about racism, privilege, and power,” she said. “And her work as a ninth-grade co-teacher (with a Special Education teacher) in English transformed our whole department’s attitude and practice in not just disability accessibility but full, loving inclusion.”

Barber-Just also said that Iverson “has taught LGBTQ Lit for decades” alongside her, and Iverson has helped her “shape and grow that course in beautiful ways.”

Iverson said a lot of her inspiration “comes from literature,” with some of her biggest role models being writers Toni Morrison and James Baldwin. One of her newest favorite writers is Yaa Gyasi who is a “phenomenal and inspirational writer.”

At ARHS, Iverson said she has tried to “meet each and every kid where they are,  tried to help them believe in themselves,” and “urged them to challenge themselves in ways that make them feel successful.”

When asked about her teaching philosophy, Iverson said “I am a true believer in the idea that all kids should have access to the highest education. Everyone should [also] be able to learn about great literature.”

She also believes that if “students make connections [in school] to their own lives,” their education will have have a deeper impact.

When asked what she will do with her prize money, Iverson said, “I will probably buy some amazing books and see some African American theater.”