Watch out Netflix: Disney Plus, a coveted new streaming service, is here 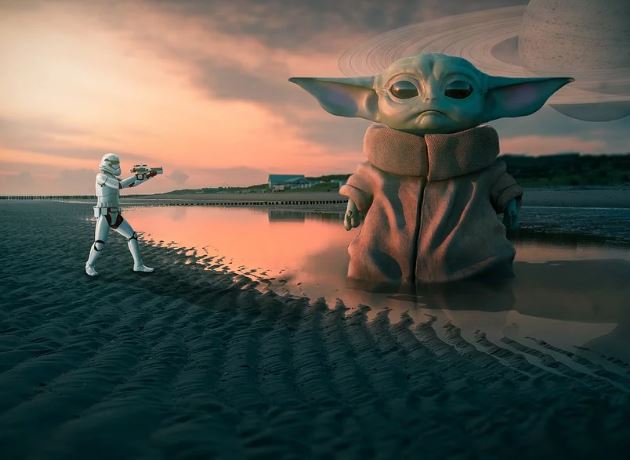 Baby Yoda is a beloved characted on ‘The Mandalorian,’ streaming only on Disney Plus.Photo: Pixabay

On November 12, 2019, over 10 million people went on their devices to download Disney’s new streaming application. Twenty two days later, the family of English Department Head Sara Barber-Just subscribed. Her twin sons Jackson and Henry had been asking to do so for most of that month.

“It was 5 p.m. and I was pretty tired. I had just finished shoveling snow, making tacos, and packing lunches, and the kids were looking for something to watch,” said Barber-Just.

They turned on the television. The first thing that appeared on the info screen was a Disney logo with a blue-purple background. They were led through a series of steps to enter information for their account, and finally, payment. “We realized it only cost $6.99 a month, so we decided to go for it,” she said.

Access was finally granted to the several colorful rows of Disney films and shows. Suggestions flying by on the top of the screen showcased the main attractions, with selections from Disney, Pixar, Marvel, Star Wars, and National Geographic.

They chose Star Wars. “Right now my twin brother Henry and I are bingeing ‘The Mandalorian,’” said Jackson Barber-Just.

Ms. Barber-Just added, “It was all worth it for Baby Yoda.”

On Disney+, you can either dive into newer Disney films and shows, or feed your nostalgia with a vault of older titles. “Avatar,” “Cinderella,” “101 Dalmations,” and “Guardians of the Galaxy” are some of the movies that ARHS freshman Adalyne Rivera has been watching on Disney+. She subscribed because “everyone was talking about it and it had all the Disney movies from my childhood.”

“I’ve been watching new shows like ‘The Mandalorian’ and my favorite Disney films like ‘Wall-E’ and ‘Aladdin,’” said ARHS sophomore Jude Holesovsky. He has Disney+ because “it’s free for Verizon wireless users for a year who have unlimited data.” He is looking forward to watching “the last season of ‘Clone Wars,’ and all the new Marvel shows.”

ARHS freshman, Ty Ifill, subscribed to Disney+ because “it just came out, and I thought it would be better than Netflix or Hulu+.” Ifill recently watched “Zack and Cody,” “Toy Story,” and “The Lion King.”

For the price, subscribers say it can’t be beat. “I already like the shows they are watching on Disney+,” said Barber-Just. “I was getting sick of watching ‘Big Time Rush’ and ‘Explained’ [on other networks].”

The navigation and usability have been working well for users for the most part. “Within two hours of having the app, I knew how to work it and find what I needed to find,” said Rivera. “It was very easy to navigate.” She has recommended the service to “a lot of my friends, and my best friend.”

However, sometimes there are issues that affect playing of media. “At the beginning, there was a message that said it couldn’t play the movie, but it hasn’t happened very often,” said Rivera.

“It takes a while to load and buffer,” said Ifill, who also reported that Disney+ “updates without my knowledge, and I have to redownload the app.”

Disney+ was announced in December 2017, and launched in November 2019. It costs $6.99 per month or $69.99 annually, and for Verizon Wireless users, it is free for a year. It is available as an application on mobile devices, game consoles, or smart TVs, but it’s not yet available on Windows 10.

Disney+ is the only place to see the highly anticipated new Star Wars series “The Mandalorian. “Other Disney+ original series are available now like “Forky Asks A Question,” a spinoff of “Toy Story 4,” and Nat Geo’s “The World According To Jeff Goldblum.” Many upcoming series include “Muppets Now,” an Obi-Wan Kenobi centered series, and multiple Marvel shows featuring MCU actors.

Compared to Netflix, Disney+ has 4K resolution and multi-screen viewing with one price and Netflix has two higher price tiers in order to access these features. Netflix has a wide range of genres from any studio, but Disney has started to remove Disney-owned content from Netflix to be put on Disney+ since Netflix is paying Disney for those titles.

Users generally think that Disney+ is either the same or better than others. “It seems pretty much the same. I just need something to watch movies on,” said Rivera. “One thing that’s not the same is the pricing. Wiith Disney+ it’s the same price for watching it on any amount of devices.”

Ifill thinks it’s better in that “they have old shows and movies that we can’t get on other services.”

The interface is “pretty simple,” said Rivera. “There’s a top bar where you can select different studios, and when you click on a movie it shows the information. Then, there’s an option to download and a default profile icon with Mickey Mouse on the side. You can click on your profile to access its settings.”

Many users seem to also think that the interface is missing features that should always be present in a streaming service. There is a lack of a Continue Watching section, and a Recently Watched section, which leaves the user to manually find the item, or search for it in the dysfunctional search bar. The only thing that’s saved is how far users are into a video.

On the launch day, there were lots of reports of being unable to sign in or play movies because of bugs, and there were even reports of broken images and categories that couldn’t load. The search bar also functions improperly, displaying the wrong items, or showing related items but not the main title that you searched for and know is on there.

Because Disney is in control of Hulu, people who are already subscribed to Hulu will be able to get Disney+ as a Hulu add-on. Hulu is also a place to put R-rated Disney content, including Marvel movies like Deadpool and Logan, and only content up to a PG-13 rating will be allowed on Disney+.

Hours after the launch of Disney+, thousands of accounts had already been compromised by hackers selling them online.

They were available for free on hacking forums or for $3 to $11. Complaints about being locked out of accounts flooded social media sites like Twitter and Reddit.

Some victims used a unique password, possibly meaning they had info-stealing or keyboard-logging malware on the device that they were using Disney+ on.

A Disney+ representative stated that they found no evidence of a security breach and when they find a suspicious login, the user is locked out and prompted to make a new password, securing their account.

It’s more likely that users themselves were affected by malware and hijacking, and the actual software of Disney+ was not hacked.

Disney responded to the report by saying that only a small percentage of users had their passwords compromised, and that login breaches were not unique to Disney+.

Other streaming services like Netflix, Hulu, and Amazon Prime have been fighting the issue for years, with over 80,000 compromised Netflix accounts currently for sale on just one market.

Something that Disney+ could do to prevent breaches from happening is add multi-factor authentication.

Disney+ immediately attracted a large audience with its promise of all of Disney at your fingertips. Users could download it on their phone, tablet, Xbox, Playstation, smart TV, or computer.

Whether you were looking to rewatch ancient animated features, watch new original series and movies, or just check out everything, it’s a tempting offer for just $6.99 a month.

The excitement of the opportunities of the service unfortunately had some downsides, with widespread troubles playing movies, signing in, and other issues involving usability.

Though the number of accounts compromised in the hijack was a small percentage of all accounts, customers were angered by getting locked out after being part of the service for such a short time.

All that said, Disney+ is a huge vault of both new and nostalgic media for all fans of Disney and its associates. Its array of options, low price, instant popularity, exclusive titles, and simplicity what sets it apart from other services.

Despite it only offering movies and shows from one main company, there are endless kinds of content to watch that all have Disney’s trustworthy stamp of approval.