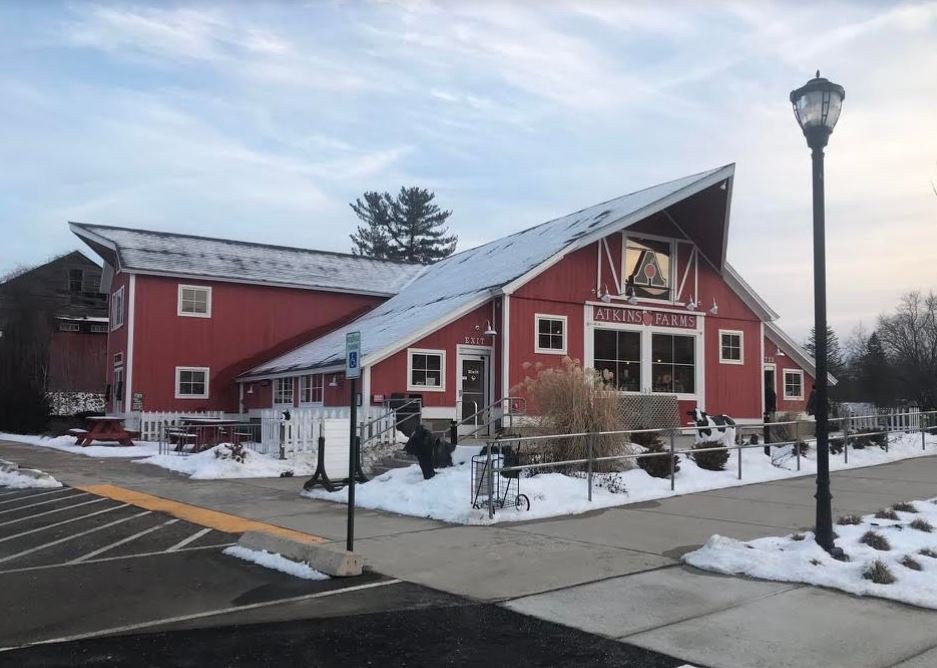 Atkins North, in the Mill District, will give up their lease this spring.Photo: Tyler Borrell

When Atkins Farms decided to expand into North Amherst in late 2015, it was seen as a local necessity for surrounding communities who previously had to travel unnecessary distances for food and necessities.

Before it arrived, there was not a comparable option between Greenfield and the Big Y on the Amherst/Hadley line.

It was this missing link in North Amherst that W.D. Cowls President Cinda Jones, and Atkins owner Kelly Lannon, sought to fill.

Lannon told me over the phone that the Atkins North satellite store was to expand their regular customer base beyond its longtime South Amherst location.

And Jones said that was why, ten years ago, she “avidly pursued Pauline Lannon investing here.”

The creation of the store was a massive undertaking. The property was originally the site of Cowls Lumber Mill, consisting of the old sawmill building and the Trolley Barn.

“Pauline Lannon, in the end, insisted that though it was more challenging, we should rebuild Sarah Cowls’ cow barn because that was most authentically Atkins,” said Jones.

During the renovation, Atkins managed to maintain the feel of the barn by using the original timber frame, roofline, and red siding.

“We’re proud to have followed her direction and rebuilt that iconic barn,” said Jones.  “We’re so grateful that Atkins has been our partner over the past five years.”

Despite this time and attention to detail, however, the North Amherst location is closing its doors to, as Lannon said in an email, to “refocus on [the] flagship store. There’s a lot that we need to pay attention to.”

The North Amherst location was a part of the Mill District, which, according to its website, is “rapidly shaping up to be the Pioneer Valley’s ‘it’ place for eats, arts and entertainment.”

With new residential tenants moving into the Mill Districts’ many apartments, it seems reasonable to assume that the Atkins’ location would have seen a big uptick in business in the near future.

“Despite how the timing may look to others, a business can only be expected to run in its current state based on its own needs and its own bottom line,” said Jones.

According to Jones, the future for the Mill District is bright, with the area soon featuring many new stores and attractions.

“Across the town square, 18,000 additional [square feet] will likely include a destination restaurant, a fitness club a children’s book store, a flower and gift shop, vintage clothing store, and more,” she said.

Jones understands the need for a grocery store in the area and is planning the next store to fulfill the same needs Atkins did.

“We are in discussion with three such stores at the moment and feel confident that the lead time Atkins has given us to find a great follow-up community grocery store will be more than sufficient,” she said.