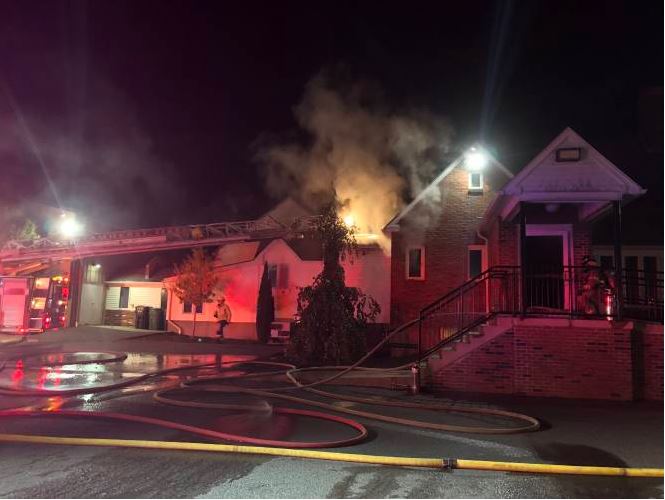 At 11:03 p.m. on Friday, November 1, firefighters received a 911 call from an Amherst resident who saw smoke coming out of Hampshire Athletic Club, located at 90 Gatehouse Road in Amherst.

Nine firefighters on duty rushed to the scene, where they discovered heavy fire in the lobby and front desk area of the gym.

The fire is believed to have started in the laundry room behind the front desk, and spread throughout the first floor of the building.

There was extensive damage to the lobby, office, and cardiovascular room, but no real structural damage from the fire, according to The Daily Hampshire Gazette.

The roof above the fire was cut open by firefighters to vent smoke and heat from the building, and it took about two hours for crews to exterminate the blaze, vent the building, and control any hot spots. Since the fire occurred after hours, there was no one in the building and no serious injuries as a result.

Total damage from the fire, including $300,000 of lost cardio equipment, is estimated to be over $1 million. The gym did receive good coverage from Amherst Insurance Agency.

Hampshire Athletic Club announced that they were closed indefinitely after the fire on November 1, and on November 26, they reopened to members with about 85% of their previous offering available.

Between the time of the fire and their reopening, owner Perry Messer said he had been working 15 hour days, seven days a week to get the gym up and running again, according to The Daily Hampshire Gazette.

Smoke had filled most of the building during the fire, so some of the work during those weeks was cleaning and repainting undamaged areas so they could be used while the more serious work was being done on other areas.

Now, a temporary entrance and front desk leads into a free weight room, adjacent to the unharmed basketball courts and few cardiovascular machines looking over the court.

The tennis courts, aerobics and stretching rooms, and pool are all also open.

According to Messer, the pool was saved by large fire-retardant windows that didn’t blow out during the blaze. If they hadn’t been there, the heat would have broken through the glass and there would’ve been nothing left of the pool.

Although the gym reopened in an impressively timely fashion, its closing still impacted many people’s everyday lives.

Exercise is an extremely important part of many people’s physical and mental well-being.

It is proven that regular physical activity is one of the best things you can do for your health, and it results in very significant benefits.

Exercise strengthens your heart, improves your circulation, and reduces your risk of heart disease. It helps your body manage blood sugar and insulin levels, and strengthens your bones and muscles. It also helps control weight and is one factor in preventing obesity.

Along with all these physical benefits, exercise also improves mental health and relieves stress. During physical activity, your brain releases endorphins throughout the body.

These chemicals enhance your mood, make you feel more relaxed, and reduce anxiety. Exercise also improves the quality of your sleep, which has many positive effects on your overall health.

Most people who exercise regularly can testify to these effects, and that is why many people’s lives were significantly affected by the gym being closed for a number of weeks.

Members of Hampshire Athletic Club use its facilities in a variety of ways, but all for the same reason.

Senior Acadia Case has been a member of HAC for about three years, and goes to the gym twice a week to take Zumba classes and use the weight lifting and elliptical machines.

And ARMS ELL teacher Alicia Lopez also visits three to four times a week to swim laps in the pool.

All three members commented on the way the gym being closed and the lack of exercise affected their mood and their lives.

“I missed a couple gym sessions leading up to the season which is a bummer,” Masteralexis said. “I had to resort to doing forms of exercise like running and it did affect my mood not being able to lift. Lifting is a big part of my mindfulness and how I view myself.”

Similarly, Lopez missed her regular exercise and saw its effects on her daily life. “I really noticed that I missed swimming,” she said. “I don’t sleep as well when I don’t swim.”

The gym is not only about providing the facilities needed for many types of exercise, but also about convenience and routine.

Case noticed that it was much more difficult to find the time in her day to exercise when the gym was closed.

“The gym would be on my ride home from school, so it was easy to go there after school,” she said. “[When it was closed] I got home and it was dark and I couldn’t go outside to workout.”

For athletes who were regularly training, lack of exercise also had an impact on mental toughness and preparation. For Masteralexis, this was definitely the case as he prepared for the upcoming season.

“I don’t feel good when I’m not able to exercise because I know that my competition is out there working and lifting and I’m not,” he said.