Green New Deal: what you need to know 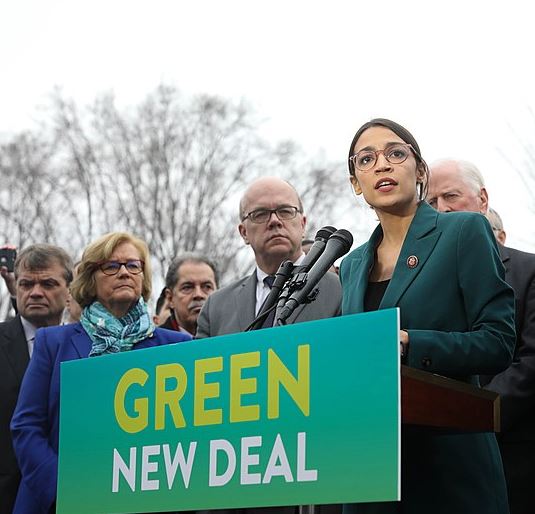 Almost 80 percent of Americans in a Washington Post poll said they think that climate change is a real issue that must be dealt with.

And climate change is ranked as one of the most important issues by millenials, who have pressed their government and big industries to take radical action within ten years.

Yet, so far almost no serious climate policy has been passed. Instead, most progressive climate restrictions and policies have been undone by the current administration.

At this moment, the most talked about climate proposal is The Green New Deal, a fourteen-page climate proposal that aims to stop climate change. According to The New York Times, this set of goals and guidelines for America, introduced by Representative Alexandria Ocasio-Cortez of New York and Senator Edward J. Markey of Massachusetts, both Democrats, would  “wean the United States from fossil fuels and curb planet-warming greenhouse gas emissions across the economy” and would “guarantee new high-paying jobs in clean energy industries.”

The resolution is nonbinding, so even if Congress approves it, it would not necessarily become law.

Critical and inflammatory responses to the GND include: “The Democrats are trying to get rid of your burgers”; “They want to steal your cars, your buses, your planes”; and  “There is no chance of this bill passing through Congress.”

However, when introduced, people across the party lines seemed optimistic about the GND. A majority of Americans have accepted that climate change is a threat, and most support urgent action. But within weeks of nearly daily coverage for the GND, the polls showed a shift in the opposite direction.

I spoke with students and faculty at ARHS to gauge their knowledge and support for the GND. Amanda Lewis, a paraeducator in the Writing Center, considered the GND to be “an exciting thing” and a “holistic view for climate change that takes in account of the economic implications of climate change.”

Lewis added, “This, along with the students speaking out, has really shifted the perspective politically and socially of climate change.”

When asked to describe or talk about their knowledge, many students said, “I’ve heard of it, but I can’t really describe it.”

Most conservative media outlets used a strategy called tactical framing to suggest that the possibility of passing the GND in Congress was slim and to manipulate the content to fit a climate-denying narrative rather than to address the actual proposal.

Students involved in the Sunrise Movement, a youth climate action, knew the most. Senior Naomi Johnson said, “The Green New Deal is a proposal that includes a set of goals created to stop climate change and address the economic injustice that was created from climate change.”

Johnson said that past climate movements have been too “middle-class.” The GND will use this opportunity to create a movement that isn’t simply about “trees and lettuce” but about “the human lives that are impacted by climate change,” addressing the issue of “frontline communities being disproportionately harmed by climate change.”

She emphasized that Sunrise Movement is a “national movement” to “ pass the Green New Deal, stop climate change, and create millions of good jobs in the process.” Johnson stated that she is “one of the hub founders and coordinators for Sunrise Amherst chapter.”

Sunrise Movement members recently led a strike along with Youth Strike for Climate, and ARHS junior Cara Buchana said that she was one of the “recruitment leaders” for the strike held in Springfield in early December.

Activists targeted Congressman Richard Neal, who is “the only federal representative in Massachusetts” that has not signed on to a “no fossil fuel pledge.”

This bill focused mostly on creating a more just and green public housing. Sunrise Amherst is also a part of a “Western mass coalition” that is currently “working closely” with various housing advocacy groups in Springfield.