Fun for all in Adaptive PE 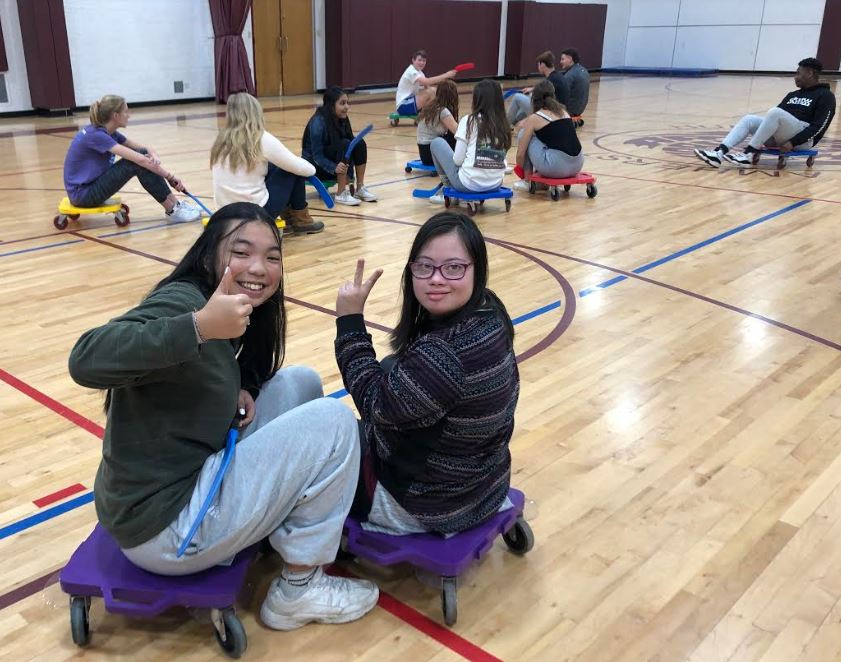 When I visited the all-new Adaptive Physical Education class this past November, I walked into a game of scooter hockey, laughter, and funny competitive banter. The participants quickly confirmed that the upbeat atmosphere was a daily occurrence.

“Adaptive gym” is not a new concept; it is simply the idea of making what was once a traditional physical education class more fully inclusive of students with disabilities.

At ARHS, Adaptive PE pairs students with cognitive or physical disabilities from the PIP Program (Pathways to Independence) and students on the autism spectrum from the AIMS Program (Academic Individualized Mainstream Support) with general education students, for a class centered on skill building and fun.

Makara Le, a senior teaching assistant in Upchurch’s Adaptive P.E. class loves how all the students in the class bring “positivity and energy and they really want to connect.”

The adaptive gym class meets during C period and meets on days 1, 3, and 5. On alternate days, the student teaching assistants have a study hall. They earn credit for their work through the ALPS (Alternative Learning Program) system for students interested in taking on new learning experiences outside of the regular curriculum required at ARHS.

The class takes place in either of the two gyms, but is usually held in the larger front gym.

Le said that initially students from the general population didn’t know as much  as they could about students from the PIP or AIMS programs; she said the class is “definitely building a positive community atmosphere and bringing these communities together.”

Because a foundational concept of adaptive PE is making all games and sports accessible and non-competitive, “we don’t usually count points because winning doesn’t matter, which is a nice break from other PE classes,” said Le.

Federal Law mandates that physical education must be provided to students with disabilities and in a separate program from physical or occupational therapy.

The Adapted Physical Education National Standards define Adaptive PE as “physical education which has been adapted or modified, so that it is as appropriate for the person with a disability as it is for a person without a disability.”

Adaptations are made in the instruction, rules, equipment, and environment of the class.

The Individuals with Disabilities Education Act (1990) uses the term disability “as a diagnostic category that qualifies students for special services.” Included in this category are diagnoses such as speech impairment, autism, deafness, and traumatic brain injury, among many others.

Physical Education and Health teacher Brittni Upchurch has been passionate about adaptive PE for her entire career, having dreamed of becoming a full-time Adaptive PE teacher early on.

In high school, Upchurch volunteered with an adult community with disabilities called New Horizons in Unionville, CT. Upchurch even wrote her masters thesis on Adaptive PE, based on research she did within a transitional learning program.

There were just over a dozen people in the research study who participated in cooperative learning activities.

“The main goal was to find if the participants’ self efficacy changed as they participated,” she said. They completed surveys before and after the six week experience and she found that indeed, respondents grew in confidence and independence from being able to take part in these activities.

Last year, Upchurch proposed the idea of the Adaptive PE class to then-Interim Principal Miki Gromacki. She was excited that Gromacki gave her complete support.

“Ms. Gromacki connected me further with the PIP and AIMS programs and gave me a lot of trust to make it happen, beyond my expectations,” she said.

Students had to apply to volunteer through the ALPS program last spring to join the class as teaching assistants this year.

Students in the PIP and AIMS programs are also in traditional PE 10 classes. The goal of Adaptive PE was to add a freestanding, permanent program in their everyday schedule, so the class exists even if PIP students have another opportunity for physical education.

In thinking about the students enrolled in the class,  Upchurch had a vision of a class with more PIP and AIMS students.

However, because it is a pilot program, there are more ALPS teaching assistants than PIP students, and just one student from the AIMS program, so there is more support than a one-on-one model than they had planned for.

There are five general education students who are doing both the fall and spring semester for ALPS credit. They are Sarah Butler, Caileb Camphor, Makara Le, Justin Masteralexis, and Tulsi Patel.

Students are highly engaged in the class, and they want to be there. “The ALPS students recognize the role they play and the role models they are. I am incredibly impressed by everyone,” Upchurch said.

PIP students in the class said that “spending time with their friends is the most fun part of the class.” They also said they’ve loved getting to know other ARHS students on a deeper level.

Teaching assistant Philly Brainin loves the inclusive nature of adaptive PE. “We all interact with each other, making sure everyone knows what to do and feels included in the group,” he said.

Le agreed that the students have “a really nice bond with everyone that’s in the class.” She said the class feels like their “own little team,” and it “brightens up my day.”

Le’s favorite memory of the semester so far is the first time that Chhendara Um, a PIP student, hugged her. In fact, Le will join the class next semester because she wants to “spend as much time as I can with the PIP and AIMS students before I graduate.”

The class has challenged Le in “figuring out ways to fully include everyone” and it’s pushed her to see the different dynamics of friendships. Le said, “I wish there were even more kids in the class and I hope in the future that we play even more games that are more inclusive of all abilities.”

She also wants to see more integrated classes in other areas of the school. Brainin agreed and said that he’s seen friendships that developed in the PE class translate to even greater comfort between PIP or AIMS students and general education students “in the hallways.”

He thinks that all ARHS students should have a chance to take a class like adaptive gym.

Zora Dallmann said that Upchurch was an inspiration in “making this program happen. She talked to all of us about how she had been wanting to do this for a while and that she is very passionate about programs like these.”

Though Dallmann was “a little nervous to start this class just because I was not sure what it was going to look like,” she loves that it has “pushed me outside of my comfort zone in a really good way.”

Reactions to the class have been “super positive,” said Upchurch. “A lot of students approach me in the hallway to ask about the class.”

Ms. Upchurch’s favorite memory so far in the semester was the first day they used a parachute in the classroom.

She had worried that they were going to think she was “totally crazy for bringing out the parachute” but then she looked at the students “smiling and laughing.”

“OMG,” she said. “I had no idea I missed playing with parachutes so much.”

Students interested in doing an Adaptive PE ALPS next year can apply with Upchurch.

“We want students from the general school population to spend more time with the PIP students on activities such as attending Best Buddies [club meetings], involving themselves in the PIP program, and creating spaces for visibility and awareness,” Upchurch said.

Upchurch has plans to expand the program next year to the middle school. The administration and Upchurch will also be working to replicate the class district-wide.