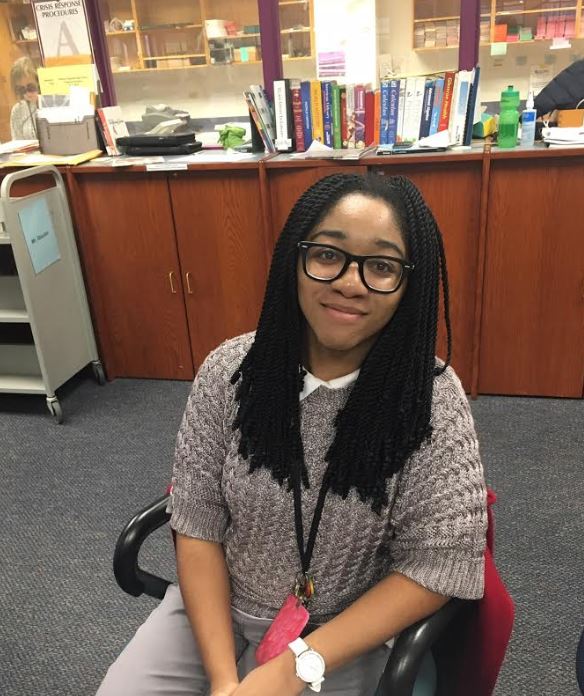 Kristie Morrison never thought she would be back at her own high school after graduating in 2015.

As the new ARHS library paraprofessional, though, that’s exactly where is, and she describes this unlikely return after five years as “surreal but pleasant.”

Morrison said her time at Amherst Regional High School “was pretty normal.” In high school she had no idea what she wanted to do with her life.

“I kind of just wanted to be a famous artist,” said Morrison, who still very much enjoys drawing and doing graphic design on the side.

Morrison went straight to Fitchburg State University after graduating from ARHS and she earned a bachelor’s degree in video game design.

“Since I rushed the major I picked when I went to college, now I want to really slow down and think over what to pursue in the future,” said Morrison.

You can find Morrison at the first desk as you walk into the library, ready to help you find a book. Her other work includes checking, cataloging, covering, and shelving books, magazine processing, and spreadsheets.

“If you can think it, and it has to do with books, I probably do it,” Morrison said.

Morrison loves books and feels lucky to get to spend her day in the library. She described books as “movies for the inside of your head.”

She values the escape that they provide to anyone and hopes to spread her love of reading.

Ms. Stocker, the head librarian and a fellow ARHS alum, thinks Morrison will be an important asset to the library and the students.

She knows that Morrison’s experience at ARHS and her knowledge of the school and classes will help her in working with students.

She says the fact that Morrison knows what taking classes here is like gives her an advantage in supporting students.