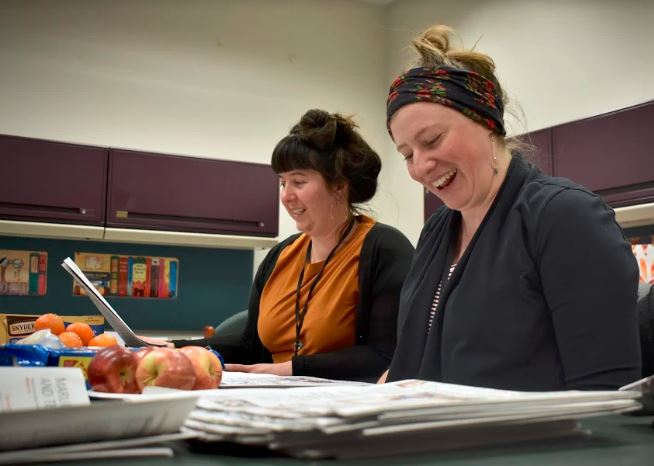 Ms. Stocker and Ms. Lewis are excited to welcome students to their writing workshops.Photo: Sophie Schreyer

When Amanda Lewis, who runs the ARHS Writing Center, and Ella Stocker, school librarian, noticed that students frequently come to them with the same sorts of questions, they decided to create a series of workshops to answer the most common questions.

Instead of helping one student at a time, they could help many students simultaneously.

Both Ms. Lewis and Ms. Stocker share a passion for reading and writing, and they hoped these workshops would spark that fire for others.

Ms. Lewis, who is adamant about supporting students said, “The writing and the research process are so integrated; it made sense to collaborate to support students.”

She also wanted students to know about “all the resources” they have available, and to build their confidence in trouble areas.

Ms. Stocker became a librarian because she loves books, reading, sharing knowledge, and hanging out with students.

“I think there is a very strong culture of stress here,” added Ms. Lewis, who hoped the workshops might “de-stress students.”

“We are offering another tool for people to learn and be helped,” she said.

The first workshop was about research questions, the second was about sources and citations, and the third was about thesis statements.

“We tried to keep them pretty short, about half an hour, so students can come after school before clubs or sports practice,” Ms. Stocker said.

About ten students went to the first workshop and by the end they were all helping each other with different questions and assignments, “which I love to see,” said Ms. Lewis.

The workshops were held in the library but in the future they will be held in the professional library which is a smaller and quieter space.

Both Ms. Lewis and Ms. Stocker are hopeful about the impact of the workshops, and want them to “reenforce what teachers have said.”

“It’s a way to not take up as much class time going over the same things and students can help each other learn in these workshops,” said Ms. Stocker.

After each workshop, they collected student feedback and they are open to hearing ideas for future sessions.

Stop by the library or 141 to learn more and get to know Ms. Stocker or Ms. Lewis!