Girls b-ball: ‘Every game is a big game’ 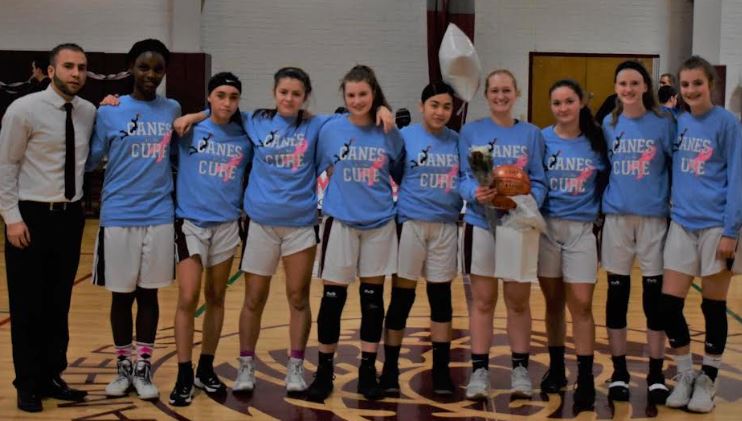 Girls’ basketball celebrates the end of the season.Photo: Courtesy of Kasey Bumgardner

The Amherst girls’ varsity basketball team has had a fantastic season, ending the season with a record of 9-11, showing tremendous improvement since last year.

Coach Dustin James has been with the team for five years. His dedication motivates the team each year to improve and try to make it to the postseason.

The team had an outstanding season.  They almost beat a couple of Division I teams, and won against both Granby and Palmer twice this year; these were teams that they had lost to twice last year, highlighting their collective improvement.

In fact, the team played Palmer for senior night which was especially special for Bumgardner. “The last ten seconds of the game, I made a basket,” she said.

Coach James also said that some of the team’s biggest games were with Granby and Palmer.

“We came away with great team wins versus Belchertown, Agawam, two versus Granby, and our Senior Night win versus Palmer were some nice highlights from our season,” he said.

Bumgardner said that some of the standout players this season were junior Klaes, sophomore Petua Mukimba, and freshman Delaney MacPhetres.

Both Bumgardner and Klaes had a lot to do with the team’s success. In their role as captains, they don’t just shake hands with referees and other captains before games or go over rules; they also mediate between the coach and players and between player and player. And they provide leadership and motivation during practice and games.

The team is just as close off the court as they are on. Bumgardner likes to make sure that the team is hanging out together and getting along well, so they can perform their best on the court.  “We tie-dyed socks together as a team,” she said.

The team also likes to get for together before games or practice and they enjoying going to each other’s houses to watch movies.

Regarding the number of people that decide to try out each year, Coach James said,  “It has varied, but from both junior varsity and varsity teams we collectively have around 20-22 players on our roster.”

This year, the team started with 21 people trying out. A couple of people left the team during tryouts. By the end of tryouts, there were nine people on the varsity team and seven or eight people on the JV team.

“Anyone [can try out], it’s just closed off to middle schoolers this year with the exception of one player. Middle schoolers used to be able to play for the JV team but not anymore,” Bumgardner said. “There are not cuts, at least for JV.”

Although this year has been Bumgardner’s last high school basketball season, she has goals for her team to achieve next season.

Coach James had very similar goals. “[I want to] make it to the postseason and compete for a Western Mass Championship,” he said. He loves basketball, and thrives on coaching it.

“The game is so much fun. I love the competitiveness, the camaraderie, the details involved, and the strategy involved. Basketball is a great game, and it can teach you so much about yourself, on and off of the court,” he said.

Bumgardner also thrives on working to be better and the competition. She likes the team aspect but also “the drive to work hard and improve individually.”

“Every game for us is considered a big game when you are trying to make the playoffs,” he said. “Although our loss by three to Frontier at the end of the season was a big game in order to qualify for postseason, we continued to compete until the end. That’s all you can ask for.”