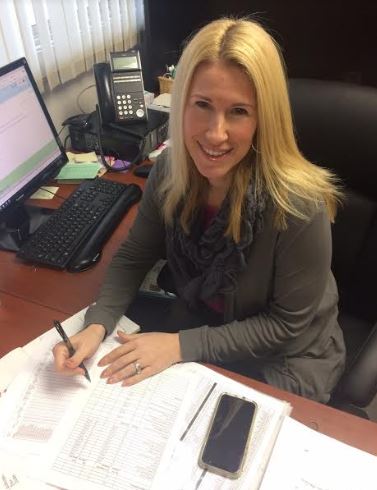 Interim Principal Miki Lee Gromacki makes being the leader of a school look easy, but do you really know what it takes to be a principal? Becoming a principal takes a lot of hard work.

In Massachusetts the requirements include earning your bachelor’s degree, a teaching certificate, gaining at least three years work experience in education or management, completing a graduate degree, obtaining a specialist’s license, and earning a passing score on both the Communication and Literacy Skills MTEL and the Performance Assessment for Initial License (MA-PAL).

Dr. Gromacki has checked all those boxes, in addition to earning a doctoral degree in education.

Growing up in Pennsylvania, Dr.Gromacki learned a lot from being raised by a single mother. “Growing up that way really helped shape me as an educator because I understand the struggles that many students face,” she said. “I care deeply that all students get the support they need in a school environment.”

Dr. Gromacki received her undergraduate degree from West Chester University in West Chester, Pennsylvania, in Psychology and Criminal Justice, but than earned a master’s in secondary education and a doctorate in Educational Leadership and Administration. “I did all of my graduate work at Saint Joseph’s University in Philadelphia,” said Dr. Gromacki.

Since she became an administrator when she was very young, she had only taught for five years before becoming a school administrator. “I also taught at SJU as an adjunct professor from 2003-2008,” she said.

Then she came to ARHS, where she has been for the past 10 years.

She has thoroughly enjoyed her position as assistant principal, and now interim principal, in that time. “I’ve gotten the opportunity to meet and interact with many people in and out of the school,” she said.

Now that she has filled Mark Jackson’s shoes, she is aware how much he had on his plate. “The work is actually similar but the volume of meetings and emails is more than I could have imagined,” she said. “I now understand why he had to start his day at 4:30 a.m.”

To keep up with the job, she finds herself  “working until 11 p.m. answering emails” and then waking up to new emails at 5 a.m.  “It’s nonstop,” she said.

Despite that, she likes staying in close contact with staff, students, and community members. “It is something that is important,” Dr. Gromacki said.

Because she thrives on working with all types of people, she loves the field of education. “I get to come to a workplace with more than a thousand different people in one space,” she said.

Although many feel Dr. Gromacki fits the role of interim principal perfectly, she will not apply for the job as full-time principal.

“I have been a licensed superintendent since 2003 (in PA) but I did not actively pursue that path [either],” she said. “I really enjoy being an assistant principal and staying close to students on a daily basis.”

When asked what she hopes for in the next principal, she replied, “a dynamic and culturally proficient leader who can inspire all of us and who cares about building strong relationships with students, staff, and the community.”

In fact, if she won the lottery, she said, “after putting money away for my kids, I would love to donate money to ARPS and my previous schools, to do all those amazing things we want to do as educators but never have funding for.”

When not at ARHS, Dr. Gromacki enjoys spending time with her family. Her husband G.P. is the Amherst College women’s basketball coach and they have two children: Derek, 8, and Katie, 7.

In the Gromacki house there is not much down-time, but the family enjoys watching sports television. “ESPN is on 24/7 thanks to my husband and kids who are die hard sports fans,” Dr. Gromacki said. “But when the kids are in bed and my husband is on the road, I turn on HGTV.”

Because Dr. Gromacki is so occupied at school, she rarely sits down for lunch.  “Instead, I almost always have a latte or coffee in hand. My favorite lattes are from Amherst Coffee,” she said.

And since she grew up in Philadelphia, of course she loves her Philly cheesesteaks. “No other city gets it right,” she said. Also, as an alumni of SJU, Dr.Gromacki is a Hawks fan. “I am ashamed to admit it in this town, but I do root for the Hawks,” she said.

Even though Dr. Gromacki loves it here at ARHS, if she could be anywhere else it would be “at an Eagles game eating a Wawa Soft Pretzel.”