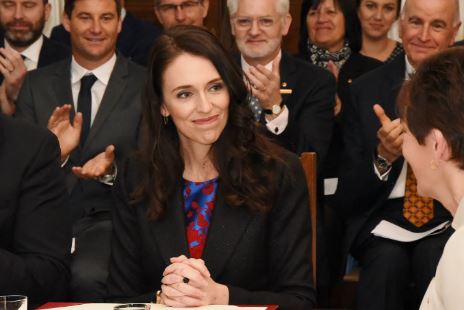 In Australia, in 1996 a gunman opened fire on shop owners and tourists with two semi-automatic rifles in what was later dubbed The Port Arthur massacre.

This mass murder led to a total transformation of gun control in Australia, requiring people who want to hold a firearms license to provide a “genuine reason,” like hunting or farm protection.

Eligibility became very difficult. Self defense was not recognized as a proper reason to own a gun, and gun owners required police background checks.

After the Aramoana massacre in New Zealand in 1990, in which a shooter named David Gray killed 13 people, new gun legislation was passed.

Military-style-semi-automatic weapons suddenly required a special permit but did not require that gun owners register their weapons, as they do in Australia.

But after the brutal Christchurch massacre of 49 Muslims in the mosques where they worshiped on March 15, the Prime Minister, Jacinda Ardern won praise from gun control advocates around the globe for promising swift changes to these laws, saying, “Our gun laws will change.”

On March 20, she “announced a national ban on all military-style semiautomatic weapons, all high-capacity ammunition magazines, and all parts that allow weapons to be modified into the kinds of guns used in Christchurch last week,” according to The New York Times.

She said, “What we’re banning today are the things used in last Friday’s attack. It’s about all of us; it’s in the national interest and it’s about safety.”

She is expected to face little to no resistance on the ban.

In the United States, meanwhile, innocent people continue to die. Gun laws are left up to each state to decide. Only in some states are permits required and only 18 states require a background check for those purchasing weapons.

The US averaged one deadly shooting a month in 2018.

During the Sandy Hook shooting, 26 first graders and their teachers died in Connecticut, yet Congress did nothing. What followed?

The Pulse shooting that claimed the lives of 49 people in a gay Orlando nightclub in 2016. The Las Vegas shooting at The Harvest Music Festival in which 59 died.

The Parkland Florida shooting in February of 2018 at Marjory Stoneman Douglas High School in which 17 students and staff members were killed. Shootings at a black church in Charleston, South Carolina and a synagogue in Pittsburgh.

Students across the country protested after the Parkland, Florida shooting, working to change things.

As a result, state legislatures passed 69 new gun control measures in 2018. There was finally something changing. But it isn’t enough.

Why has it taken the United States waves upon waves of mass shootings to finally see the problem guns are? Innocent people and children are dying when laws could be changed.

I think the main problem is people in the United States think their right to own a gun is more important than the safety of our whole nation. In many states, sick people can easily get ahold of guns, when they definitely shouldn’t be able to.

Not only that, but 18 year olds are still children no matter how much they want to be adults; many of them don’t act responsibly.

I think states should require more background checks before letting people own guns. I think we should also require two people have to vouch for you, like in New Zealand, for you to be able to carry a gun. Guns are dangerous and if the wrong person gets a hold of one,  it can cause mass destruction.

New Zealand acted very quickly. They don’t want something like this to happen again. Their Prime Minister is passing laws that will create greater safety, with the support of the country’s citizens.