A fresh start for The Goldbug 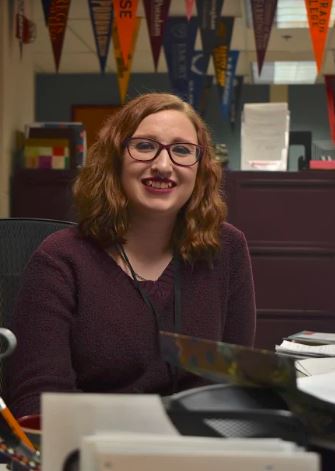 The ARHS yearbook, or as it’s more commonly known, “The Goldbug,” has been published for almost 100 years and has featured themes ranging from Pirates and Exploration to Science-Fiction and Space.

While technology education teacher Lee Larcheveque taught Yearbook Production and advised the corresponding after school club for over two decades, he “felt like it was time to take a step back.”

“The Goldbug” looked for new leadership and found it in the form of guidance secretary Crystal Garrity, their new advisor, and also willing ARHS students.

A group of seniors, Brian Rivera, Amaya Lanausse, and Keyla Marinero-Rodriguez are the three most active members.  Meanwhile, “Mr. Larcheveque has been a huge help [in the transition],” said Ms. Garrity.

Now that she is the official adviser, Ms. Garrity said, “I facilitate the whole process. The yearbook is the vision of the students and I help it get put into practice.”

While she said that the students “do most of the work,” she admitted that she helps them by “finding the vendor, organizing the layout, and gathering photos when needed.”

This year, the club is very proud to have a new vendor in Picaboo, an easy-to-use online yearbook software. Using Picaboo helps the yearbook staff “submit photos online,” said Garrity. Additionally, Picaboo allows the  “full community to send in photos in.” The yearbook, this year, is themed around “then and now.”

“We are modeling part of it around the oldest Goldbug,” said Ms. Garrity, who noted that some of the “old photos from the first Goldbug,” would be making an appearance in this year’s book.

“The yearbook is important because something you remember your classmates and teachers by,” said senior Marinero-Rodriguez, a member of the Yearbook Club.

“High school is such a big part of your life up until this point and people like reminiscing,” she said.

Ms. Garrity said that the Yearbook Club is always looking for “folks who are not seniors so next year we can have people who know how to do it, and are ready to work.”