Far-flung family and friends: students who move to US experience homesickness 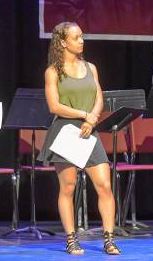 ARHS is home to students from all over the world, many of whom have parents or other relatives who sacrificed a great deal to bring them to Massachusetts for their schooling.

And while these students typically do well at ARHS, they often find it difficult to stay connected to their families in other places and experience homesickness and a longing for the culture they have left behind.

I, myself, moved here from Nigeria when I was 14, and the rest of my family eventually followed, until we were all in the US.

I was interested in finding out how others felt about being bicultural students with international backgrounds and spoke with Ricardo Orellana from Honduras and El Salvador, and Isabela Shepard, from Brazil.

Shepard is a 17 year old junior; she is from Brazil. Her extended family resides in Brazil, including her cousin Tatiana, her aunt Tia Ge, and many more.

“They are extended but we are close with them because my parents came from there,” she said.

Shepard visited Brazil last in February of 2018. She travels to Brazil every year, but it still doesn’t feel like enough.

“I would like to go more often but school and money doesn’t allow it,” said Shepard.

“We go on outings, we go to the beach, and we eat,” said Shepard, about the highlights of her two to three weeks there each time they visit.

Meanwhile, his father “is currently in the city of Asuncion, Paraguay.”

This means that he has families in three different countries outside the United States.

Some of his extended family members are his grandmother, Doris, his uncles Hugo and Octavio, and his aunt Ruth. They reside in Honduras.

Orellana last visited his extended family in the summer of 2017; he went to both Honduras and Paraguay.

He visits them at least once a year, but this year it looks like he won’t get the chance to go.

Orellana would love to visit them more often and said being away from them for long periods makes him sad “because you never really don’t know what might happen.”

Travel is hard, he said, because he “has to stop everything that’s happening” to go, and he has “school and college to think about.”

“If my family and I could freeze our responsibilities I’m sure we would travel more often, but that’s not really how things work,” he said.

Orellana doesn’t love plane travel, but he’s always glad to arrive; each time he visits a country he usually spends about a month.

According to Orellana the experiences in each place are very different.

“Since subsistence agriculture is the main form of work in Honduras in general, you see more animals about, like ducks, horses, and cows,” said Orellana.

People happen to be more open, too; “there are no real strangers.”

Orellana said it’s much warmer than in Amherst, and he immediately becomes connected to the family he is visiting. “And since its further south it’s, as expected, much warmer,” Orellana said.

He also noted that in the regions he visits, laws are less enforced and there appear to be more accidents and crimes, but that everyone is also more laid back. “People feel more friendly and inviting,” said Orellana.

When both Orellana and Shepard are not with their families the most effective way to communicate with them is through social media like Facebook and Snapchat.

Orellana is not happy that he doesn’t get to see his family that often but he happens to value the experience he has had.

“I would say in general it has made me a better person,” said Orellana.