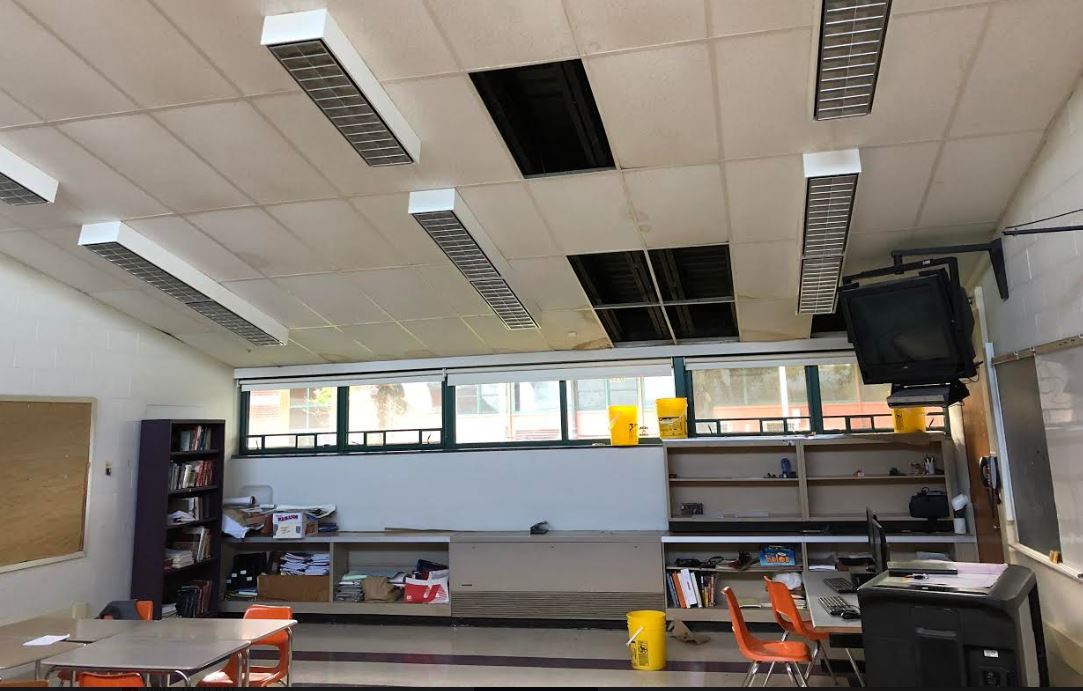 Mr. Moriarty’s old classroom, room 162, is yet to be repaired.Photo: Cole Davis-Brand

English teacher Mark Moriarty is in a new classroom this year, and it wasn’t by choice.

After teaching in room 162, which has a leaky roof, for years, he finally requested a move, and trucked all his belongings across the hall to the English computer lab in room 163, where he plans to teach his classes for the rest of the year.

Meanwhile, the room he was teaching in still has missing ceiling tiles, buckets to collect water, and the smell of mold from years of leaks coming from the roof into the room.

“There is a big seam [in the roof]. You can see it from the cafeteria hallway,” said Mr. Moriarty.

This year, more than ever before, the seam has been wreaking havoc on those in the room below. “When it rains, water gets under the roof,” he said.

With each rainfall, water seeps down onto the ceiling tiles, which are not water resistant.

Mr. Moriarty recounts that “[the maintenance team] replaced 23 ceiling tiles in one day, which all got ruined in the following week with the next rain.”

The issue doesn’t stop there.

The water pools up in the ceiling,  resulting in panels falling, water leaking onto the floor, and mold growth. Water damaged floor tiles are also a necessary replacement.

“They are not dealing with the problem. They are just trying to put in new tiles,” said Mr. Moriarty.

John Coty, a district carpenter and locksmith who is filling in for the outgoing Head of Facilities, James McPherson, reported otherwise.

“There is a contractor that has been hired to replace the 30 foot expansion joint,” said Mr. Coty, though he did not provide a timeline for project.

Mr. Coty also admitted that previously, the issue was not properly contained.

“The stained ceiling tiles should have been removed and replaced with a plastic pan with a hose attached to it, to drain any water into a bucket. [Then] there would not be any mold or health issues,” he said.

Last June, when Mr. Moriarty returned to school after a bereavement leave, he came back to a room full of soaked papers and belongings.

However, the roof was not fixed and he began the school year with even more rain coming into his classroom.

Since moving in to the computer lab across the hall, Mr. Moriarty feels much better.

The room has a wall of windows looking out at the woods and athletic fields and more than 20 desktop computers for students to use.

This room was shared by the whole English department, but since there was no other room for him to move to, they forfeited the lab and were given an additional laptop cart to share for upper level classes.

“I am very happy with the new room. Other teachers have actually come in here and told me how lucky I am to have it,” said Mr. Moriarty.

Room 162 remains open and a place where students and staff can pick up print jobs but no repairs have taken place since September.