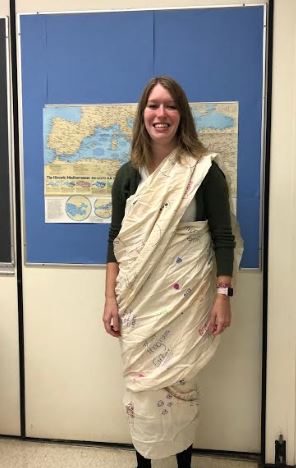 A recent UMass graduate, Ms. Farkas is ready to spread her knowledge and love of language.

Born in Grand Rapids, Michigan, she graduated from Jenison High School in 2012,  and finished her undergraduate at Grand Valley State University in 2016.

Besides her love for teaching, she likes playing video games, including Assassin’s Creed and Dungeons & Dragons, reading, going for walks while playing Pokemon Go, and card games.

Ms. Farkas felt that she was destined for teaching. As of her junior year of college she knew she wanted to teach.

“I didn’t like finding answers,” said Ms. Farkas. “I wanted to teach.”

One of the reasons why she pursed Latin was because of Percy Jackson. Her favorite goddess is Persephone because the goddess is “the maiden of springtime and queen of the underworld.”

Ms. Farkas loves her students and the energy they bring. She also likes the Amherst community because “it’s multicultural, equal, and accepting.” She thinks that it’s awesome that Latin is open to everybody.

If you end up taking a class with her, ask Ms. Farkas about the archeology excavations in Greece and Italy she participated in. And she can speak some ancient Greek on top of Latin!

She has a collection of decks of cards, because she buys them from everywhere she goes, and her friends buy them for her when they travel.

Ms. Farkas is also a cat lover. She has one cat named Persephone after the goddess.

Ms. Farkas is “happy to be here” and would love to see you in her class.