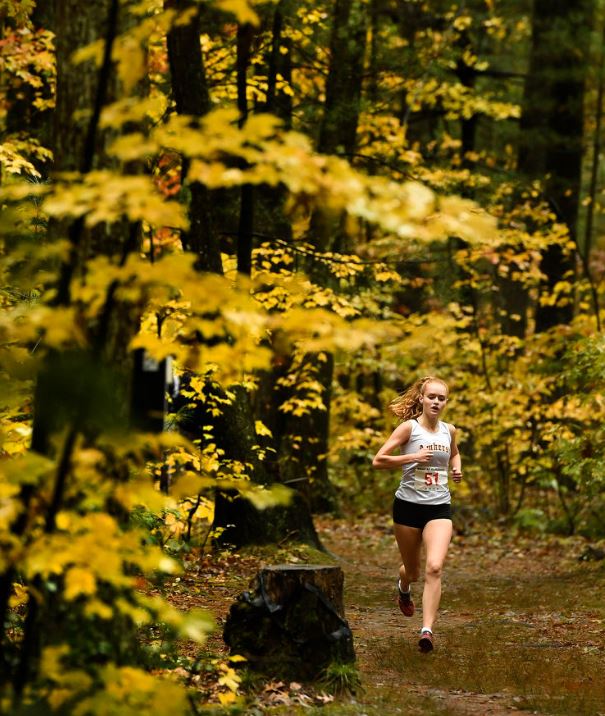 Led by a group of elite runners, the ARHS cross country programs are at the top of their game in 2018, with ambitions to win big this year.

Both the boys’ and girls’ teams have had much success, both securing the title of league champions in a win over the Longmeadow and Ludlow teams on October 9, 2018.

Cornelia Sullivan, a coach for the girls’ team,  has been involved with the program for seven years, four of those years running for the team and the other three coaching.

Sullivan has watched the team grow and credits the team’s success to a strong group of leaders on the team, having four helpful coaches, and, of course, lots of summer training.

“The team doesn’t feel like a cohesive group when any one of them is not at practice,” said Sullivan. “Each girl brings a unique aspect to the team.”

One of the most important meets was the team’s senior night against Minnechaug.

“The team really showed strength and a sense of togetherness,” said Sullivan.

She believes the seniors are very good at setting an example and helping to lead the large group of first-year runners.

Another important meet for the team was the Thetford Invitational.

The team finished in second place, a huge improvement from the team’s 15th place finish when Sullivan began her involvement as a coach.

With the team’s many triumphs, Sullivan has high hopes for the Western Mass championship meet.

“I think that something that continuously impresses me about the team is that everybody there genuinely loves to run or loves some aspect of running,” said Julia Hopley, a senior on the girls’ team. “That creates a really strong group of girls and a great team culture.”

The boys’ program, led by Chris Gould and Bob Rosen, is fully focused on the team’s improvement this season.

Gould believes the team’s top runners are Jack Yanko, Aidan Shea, and a group of juniors all gunning for scoring positions on the varsity team.

Gould described Yanko as “a once or twice in a lifetime” runner who knows how to work.

The whole team comes together, in Gould’s eye, through healthy competition.

Nor Young, a junior on the boys’ team, has been running for 2 years now and loves every moment of it. He describes it as the “best part of my day” and even loves the frequent workouts.

He loves the fun traditions the team has such as paper bag day.

On paper bag day, teams get together and make secretly themed gift bags and share all the bags at the end.

Rosen is very happy to work with the team and enjoys helping motivated young runners.

“When anyone improves or gets better, it’s an outstanding moment,” said Rosen.

That feeling is shared amongst the entire team.

The Canes’ season is coming down the final stretch with the Western Mass championship meet on Saturday, November 10.

With chances for greatness around the corner, both teams are ready to take on any challenges thrown at them and to run like the wind.