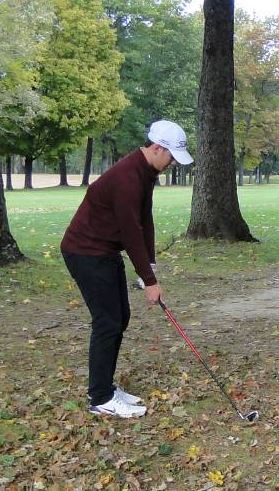 With a winning record of 8-3, the Amherst golf team is headed straight to the playoffs. “Amherst golf has been steadily improving throughout my time at the high school, and I think it will continue to improve because of the upcoming middle schoolers,” said Eli Kayser-Hirsh.

The team has a total of 13 people, including five middle schoolers due to the lack of golfers at the high school.

Captains are Kayser-Hirsh and Evan Rutherford because they are a combination of the best and oldest players on the team. “The team is really young, so I feel like as a captain I’m helping the middle schoolers learn what it’s like to be on a high school team and mature into young adults,” said Kayser-Hirsh.

The team has one coach, Carl Vigeland. He’s been their coach since half way through the 2016 season due to their old coach being fired. Vigeland fit right in and got the season running smoothly. “He is very enthusiastic and has played a big part in our teams improvement,” said Kayser-Hirsh.

On a normal practice day, they start off with a speech from coach Vigeland, followed by playing five holes.

The coaching is very laid back. “Once a week, Coach gathers us together to talk about general skills everyone should work on,” said Logan Madden, another member of the team. The team mostly plays golf with minimal instruction.

Nothing shocking has happened so far in the season, but Kayser-Hirsh said the highlight is simply having a winning score. Overall, the season is going smoothly without any catastrophes, or outstanding strokes.

For every match, six people are required. There is a core group of four players that play in every match including, Kayser-Hirsh, Rutherford, Piet Hartman, and Skyler Ferro. The two other spots are usually Chase Lashway and Tyler Feeney; when someone is out, the alternates play.

Compared to past years, the team is “taking it way more seriously and it’s paying off cause we’re getting dubs,” said Kayser-Hirsh. “The team’s chemistry has gotten a lot better, too.”

Unfortunately, the weather affected several of their practices and matches. They play in the rain as long as it is not raining too hard. When the grass is wet, “it’s harder to play because the ball sticks in the ground more,” said Madden.

Amherst golf has one senior, Jared Cutting. This means next year’s team will be very similar, except “everyone will be getting older and hopefully better,” said Kayser-Hirsh.

Although the team is small, they have a promising few years ahead of them. By the time the current middle schoolers get to high school, they hope to be even more experienced and skillful.