“The Breakfast Club” gets a makeover 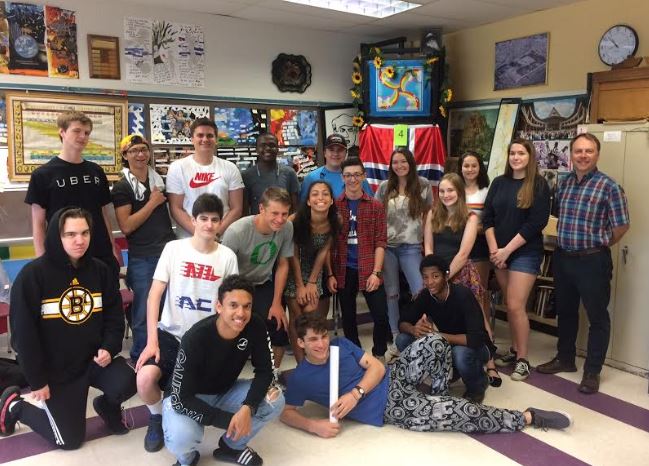 The Creative Writing class that recently wrote an updated version of “The Breakfast Club.”Photo: Sara Barber-Just

For years, ARHS’s Creative Writing classes have been a place where students learn about the writing craft as they pen short stories, plays, and poems of their own.

This semester, a teacher of one Creative Writing section decided to play with this format–a lot. Instead of tapping into different genres across the term, English teacher Chris Herland’s class spent the entire semester rewriting the classic movie “The Breakfast Club,” and updating it to make it more interesting, relevant, and relatable to audiences.

John Hughes’s “The Breakfast Club” is a 1985 coming-of-age comedy-drama. The film follows five teenagers who are brought together on a Saturday morning to serve detentions for different reasons; together, they face a strict disciplinarian in charge and bond in their opposition to him.

The characters hail from a number of different stereotypical high school cliques: Claire (Molly Ringwald) is the ‘princess,’ Andrew (Emilio Estevez) is the ‘jock,’ Brian (Anthony Michael Hall) is the ‘nerd,’ Allison (Ally Sheedy) is the ‘basket-case,’ and John (Judd Nelson) is the ‘delinquent.’

One of the film’s main themes is the struggle for American teenagers to understand themselves and others; Hughes explored the pressure put on teens to fit into their respective cliques. Once the characters’ stereotypes are broken down, however, they empathize with each other’s struggles, dismiss their inaccurate first-impressions, and discover that they are more similar than different.

Adults feature as some of the villains in the original; in the film, detention proctor and assistant principal Richard Vernon is portrayed in a very negative light; he constantly talks down to the students and even abuses his authority by locking John Bender in a closet.

Mr. Herland first saw the film about 30 years ago as a ninth grader. “Back then I thought it was fun,” he said, and he went on to rent it many more times as a teen. A friend of his would even recite the film while working. “It was a good movie,” he reminisced.

However, when Mr. Herland viewed “The Breakfast Club” recently with one of his sons, his opinion changed. “It was so dated,” he said. “I don’t think it speaks to anybody anymore.”

The rewritten script is similar in one way to the film; it features five kids in a Saturday detention. But unlike the original, it takes place in a city and has a more diverse cast.

“A lot [in the rewritten script] takes place outside of the classroom with flashbacks,” Mr. Herland said. “It addresses the broader social topics of the day. The class created real characters instead of relying on stereotypes.”

Mr. Herland divided the class into five writing groups of three-to-five people. Each group wrote a 75 page script, focusing on one of the characters as the protagonist. The class then took “the best elements of each script,” Mr. Herland said, “to make one.”

Once the rewritten script of The Breakfast Club is complete, Mr. Herland “will sell it to Hollywood for millions of dollars,” he said.

Before he had the class start the rewrite, they saw the movie. Junior Jen Hodgkins said, “It was good for its time but isn’t as relevant now.” Junior Sylvester Gathuru agreed. “The film wasn’t all that great,” he said.

Both Hodgkins and Gathuru saw it as a “really whitewashed” movie. As a way to make the rewrite more relatable, the races of many of the characters were changed; “in the original, all the characters are white,” said Gathuru.

Hodgkins said that the rewrite not only has more diversity but is “much more relatable for teenagers today. We wanted to be sure we covered topics [that] are more relevant [to us] than those in the ‘80s.”

In the rewrite, the detention proctor is a young lesbian English teacher named Ms. Bianchi. The students are: Michael, a black quarterback who wants to be a dancer; Naomi, a popular white girl who is the daughter of Claire from Hughes’s script; Rosa, a Latina girl who has to take care of her younger siblings; Rowan, an environmental activist; and Sanjiv, an Indian boy adopted by a white family who is a Soundcloud rapper.

Hodgkins said the script involves issues such as gun laws and differing social classes. The students now have cell phones and there are scenes where they JUUL.

While the Creative Writing class was working on the rewritten script, some of the students, like senior Tessa Levenstein, had a good time and even grew fond of some of the script’s characters.

Sanjiv’s script was her favorite part of the writing process. Sanjiv is “struggling with his conflicting American and Indian identity,” she said, and “he’s pushing against assimilation.”

Levenstein wasn’t surprised that the rewrite wasn’t a seamless process.  “The hardest days [of the project] were when we were writing the initial scripts and couldn’t get anything done,” she said. “But the good days were when we invented our own paths.”

When a student in the class, senior Aviva Weinbaum, cut her hair; it was “a good bonding experience,” Levenstein said, for her group.

Once the five scripts for each of the characters were written, the class read them and then picked the parts they liked. Now “Aviva, Lijah [Joyce], and Neosha [Narayanan] and I have been going through all the scripts and merging them together,” said Levenstein.

Mr. Herland said he was really impressed by what everyone in the class managed to accomplish. “No one had ever done anything like this before. They spent two months in groups focused on one project,” he said. “They wrote an entire screenplay. It was amazing.”

A theme from both the original and rewritten script is that “everyone has their own struggles,” said Hodgkins. “Don’t judge someone based on their stereotype or what you assume about them.”