Nordic: flying through the woods, with ‘skis the only sound’ 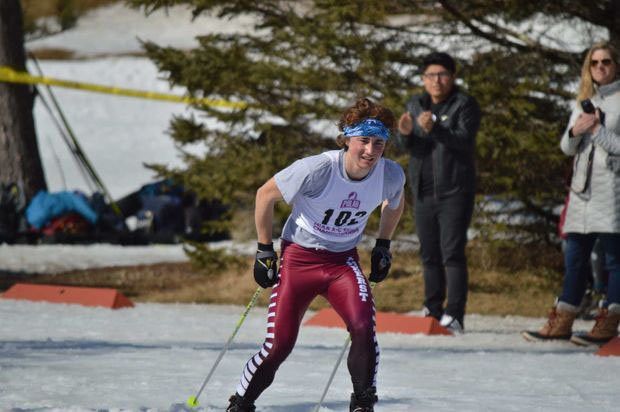 After last year’s hiccup in coaching, they wanted to pull together to help the star athletes achieve their goals, while supporting the new members who needed to be developed.

“I credit my win to the two weeks in between the last race and Western Mass, in which I prepared mentally and physically to compete my best and end on a high note,” he said.

Sedor-Protti finished 19 in Western Mass after coming off the flu and had a bunch of top three finishes in the league.

Wenczel came in at number 34 in Western Mass and Catherine Larson at 37, though she just started this year. Coach Woodruff said,

“Everyone improved over the season which was the goal.”

Not having snow didn’t stop the team. They often changed up practice depending on the weather.

They did roller skiing, used ski machines in the weight room, did running workouts and, when they had snow, they skied at Cherry Hill.

The team bonded at practice, waxing skis before races, taking long bus rides, and cheering each other on.

“It’s got a really fun environment to it,” said Wright. “It’s not easy but the whole team vibe is fun.”

Working hard out in the elements when its cold and snowing, sharing the same experience, pulls them together.

“Nordic skiing is full of wonderful athletes who are supportive or inclusive. We [don’t just] celebrate big winner; we celebrate all improvement,” said Coach Woodruff.

“If you love getting out and enjoying nature, flying through the woods, and the skis being the only sound, Nordic is for you,” he added.

“Races can either be just a fun experience or very competitive, so I would definitely encourage anyone, no matter their experience with skiing, to join the team next winter,”said Lacy.

With cross country skiing in America on the rise, America just nabbed a gold in the Olympics. “It’s getting bigger and bigger and Amherst should rise up too,” said Coach Woodruff.