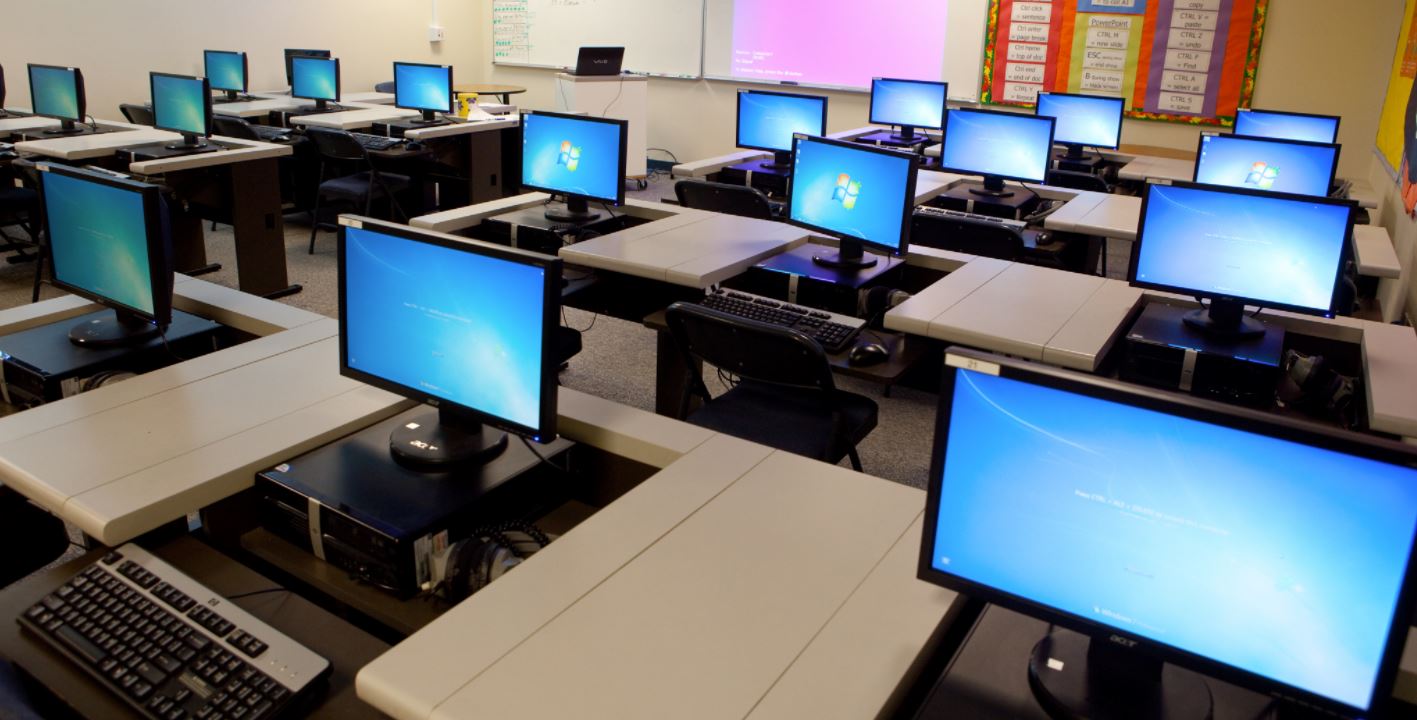 Over past the two decades, technology has gradually become an essential aspect of education. In 1996, when grades were still on paper, the overhead TV-VCR sets were introduced. Ten years later, when the school was still without Wifi, the desktops were introduced.  And now, as the TV-VCRs are obsolete and a world without Wifi is difficult to consider, the high school is in the process of distributing personal Chromebooks to all of its students.

It’s relatively easy to come up with the names of hardware in use by our school today: desktop computers, laptops, Mimios, document cameras, overhead projectors, and televisions seem to constitute the list. The software is a different story. It’s a daunting task to consider the number of Google Docs written, web sites visited, and apps used by students and teachers in service to academics.

Compared to the classrooms of our parents, classrooms today are host to an abundance of technology. It’s likely that most of the technologies we use in school on a daily basis are taken for granted, just another piece of the education puzzle.

In most math classes, it’s common practice to project a graph of Desmos or a student’s written work using the overhead projector. Math teacher Alex Lariviere said that the advantages of such technologies are “logistical,” that they “made complicated processes quick and simple.”

For Mr. Gould, Google Classroom has become a favorite tool. “It’s an easy and efficient vehicle to keep track of student (and self) progress,” he said. “Classroom makes it easier to comment on student work, easier to add an image (and its source) to an assignment, and easier to assign work. Now that it’s on Classroom, there’s no excuse not to do it.”

Walking from Mr. Gould’s room and into the library, you’d find yourself surrounded computers that contain more books than the library itself.

Since head librarian Leslie Lomasson started as the school’s librarian in 2006, she has added to the school’s (previously antiquated) library web site, both libguides and the virtual book library.

The libguides provide credible research sources for students to access and come as a result of Massachusetts’ endeavors to purchase statewide membership of a multitude of databases.

The virtual library makes it possible for students to access the catalog from anywhere.

Ms. Lomasson illustrated that “by expanding the virtual library, we’ve made resources more accessible and created more outputs (such as audiobooks and bigger-print text) for those resources.”

Whether you’re in math class, history class, or the library, it’s certain that one of the technologies already described has made daily academics easier. And yet, as with anything, these technologies prove themselves to be double-edged swords.

Due to the 100,000 books now uploaded to the virtual library, the school has ceased to buy print reference sources. Though it’s easier to access books online (assuming one has internet), opinion suggests that people enjoy reading printed text as opposed to text displayed on a screen.

It’s also arguable that, the ease-of-access in regards to modern information has deflated its value. “You can’t get everything on the www. Information isn’t free,” Ms. Lomasson commented.

And yet, the Internet’s sheer size and depth might deceivingly appear to prove the contrary.

Another reality to consider relates to the Chromebooks’ introduction. As with the TVs and VCRs of old, each set of Chromebooks will one-day become obsolete. More specifically, each one only lasts about three years according to Ms. Lomasson. “Tech just changes so quickly nowadays,” she said.

After singing the praises of Google Classroom, Mr. Gould went on to talk about many of his gripes associated with the integration of technology into teaching, speaking first about his feelings regarding the switch over to the Powerschool gradebook software.

He began by saying that Powerschool “philosophically sounds like a good idea. Students, in theory, can keep track of their progress and make sure they keep up.” And yet, being that the program is transparent by design, said it leads to aggravation.

“Students can keep track of their grade on an assignment-to-assignment basis, constantly, but grades take time,” he said.

When grades were handwritten, he said, there was less peering over a teacher’s shoulder. Even in coaching, Mr. Gould has noticed that parents are keep track of their kids (via cell phone or email) despite not doing so at all when he himself was a student here.

Another aspect of technology in schools that Mr. Gould believes is significant is its potential for distraction. He commented on his observations regarding students’ smartphone- spurred distractions (social media) in class saying that “a total disconnect would be definitely be a net positive for some.”

He also mentioned how, in addition to smartphones, the Chromebooks (that every one his students is assigned for the entire semester) can allow for similar distractions.

When asked about these distractions, Louis Triggs, a senior, had this to say: “There’s certainly as much propensity for distraction as there is for enhanced and accelerated output, which is why, personally, I’ve always been frustrated with the dialogue surrounding the use of technology, as it always seems somewhat blind to the fact that technology isn’t an end in itself, but is a means to accessing other material.”

Towards the end of my conversation with Mr. Gould, he coined the phrase “societal balancing act” as it relates to our technology use. It’s clear that the introduction of modern technology into modern education has had both positive and negative consequences.

Knowledge has been democratized through the digitization of our library and yet, as Mr. Gould said, “if you have more of everything, you look at them all less.”

Students, for the first time, have access to a complex graphing tool that fits comfortably in their pocket. And yet through the use of that same tool they also have access to an innumerable list of distractors.

Google’s products such as Google Docs and Google Classroom make sharing documents between students and teachers much easier than it has ever been. And yet, we would do well to ask ourselves if we trust a single company with all of our academic material.

Despite all of this, as Mr. Gould observed, “attraction to technological progress is unstoppable.”

Ms. Lomasson ended our conversation by saying this: “As information becomes ubiquitous, the most essential thing for us to understand is how to sift through it all in order to determine what’s useful and what’s not.”