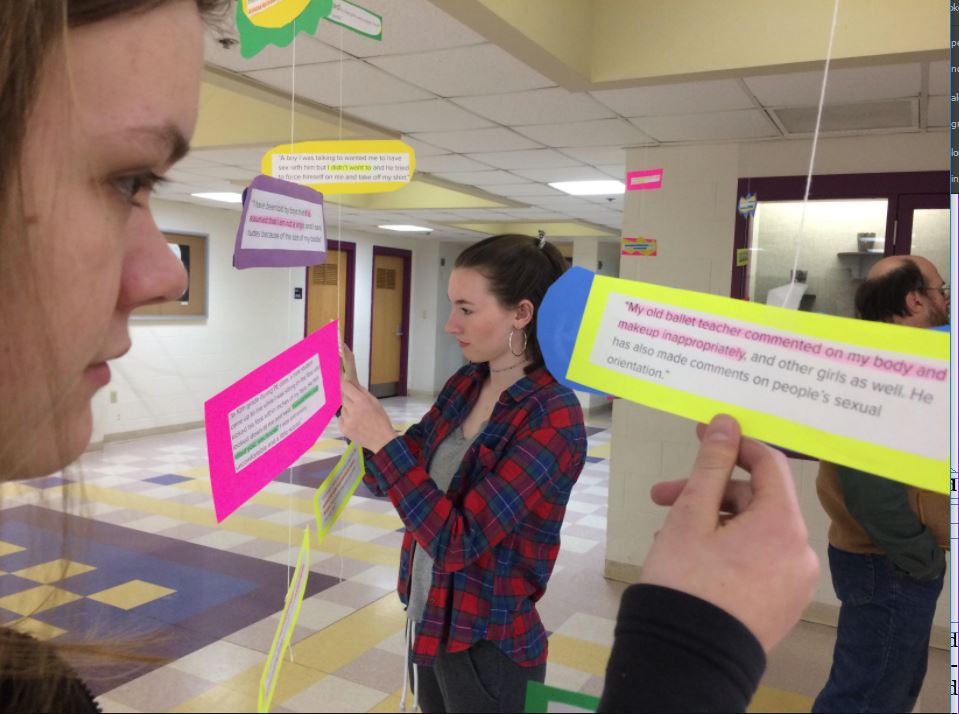 Fiona Warnick and Julia Jemsek take in the school’s Me Too exhibit.Photo: Eliza Carson

In mid-October most people suddenly found their social media flooded with stories of experiences with sexual harassment and assault accompanied with the hashtag #metoo.

There was a shift in our daily Internet consumption, and ignoring sexual harassment and assault got much harder. The hashtag was started by actress Alyssa Milano, though Tarana Burke, the Senior Director of Girls for Equity in Brooklyn, which strives to help young women of color “increase their overall development” through programs and classes, founded the movement in 2006.

“I feel like this is going to be one of those things [where] I’m an adult telling my children about the cool things that happened to me when I was growing up,” said senior Michayla Robertson-Pine. “I will remember this one week where all of these allegations came out and were actually acted upon; that had never happened before.”

Young people have started to create these conversations, however, for ourselves.

The Me Too display in the front lobby happened all because of students.

“Sexual harassment happens here so much but no one ever talks about it,” said Women’s Rights Club President Aviva Weinbaum, and the club knew they needed to bring the conversation to the whole school.

“When you’re in the display you’re surrounded by stories,” Weinbaum explained. She said the display “had to be done right, because assault and harassment can be really traumatic for people who experience it.”

The club wanted everyone to see it, but also knew they couldn’t force it on people because of the triggering nature. Weinbaum explained how organizers made sure to “meet with guidance counselors so they were ready to support people who came to them” after viewing it.

They also gathered related resources for people and placed them in a folder by the display in the lobby.

Everyone who saw the exhibit said it made a powerful impression.

“I remember sitting at the table at lunch,” said senior Women’s Rights Club member Liam Ashburn. “For practically all the women or girls who came up, it was such a positive thing to have that conversation starter. When I was explaining what our process was, they just lit up.” He also noticed a difference in the reactions from younger boys who “were like, ‘Oh I never knew that went on in my school.’”

“They were oblivious to the concept of women being harassed or assaulted, which was insane to me,” he said.  Indeed, in my interviews, many boys said a different version of “[the exhibit] was very shocking.”

“People might know the statistics, but it was important to know they came from people in the school,” senior Caleb Seamon said.

One testimony in the display talked about “getting constantly grabbed a bit too low when guys hug me and getting catcalled frequently.”

Another respondent described, “At Antonio’s there were two girls and a separate group of drunk boys behind them. One boy said to one of the girls that he’d buy her a pizza for a blow job.”

People were more affected by the campaign in its community context, and also the way the display was made.

“When you read about the microaggressions [like telling someone to smile when you see them] in the context of the more terrifying, egregious things [like assault],” said sophomore Kabir Narayanan, “it is meaningful and powerful. It makes you understand how [both] those microaggressions [and more serious aggressions] create a climate of fear.”

There were also some male students who were less surprised by the content of the display like senior Clayton Fosterweber, but who said the display was still “super-depressing.”

“I know all these kids in our grade who assault happens to and don’t talk about it, and this is the first time people have talked about it in the four years I’ve been here,” he explained. “Better late than never.”

Female students had different reactions to reading the stories. “I guess I wasn’t surprised necessarily but I was interested in certain things that were occurring, like stuff at parties, catcalling, people being asleep [and waking up to non-consensual contact],” said Robertson-Pine.

Senior Fiona Warnick expected the stories about horrible comments and insinuations made, but found even girls were surprised by the assault stories. “Nobody wants to believe that physical aggression happens here,” she said.

Weinbaum knew the important thing was to make sure the conversation was happening and said she felt that goal was accomplished.“The people who hadn’t heard about it before are now more aware, and the people who have been hiding their voices because they’re scared no one else has experienced it know [others have],” she said.

“As someone who has a lot of friends who are girls, it’s always coming up, it’s never not an issue,” added Fosterweber.

Ms. Iverson said she is “really proud of people who take the risk to step up. Traditionally women who speak up do not have good results professionally or personally; it’s really hard to be somebody who’s a whistleblower.”

Robertson-Pine said, “I feel like I didn’t start noticing it until I started thinking about trying to notice it.”

After the exhibit, one female student spoke to me about her experience with the police after a boy spread around private pictures she had sent to him. “The police were nice to [the boy] and then [they were] rude to me; it was really hurtful,” she said.

Another female student told a story about when two boys in one of her classes were “harassing me.” In frustration, she responded to them one day using a swear. She said that her teacher intervened by bringing her out in the hallway and reprimanding her for bad language. She assumed her teacher knew they had been bothering her, and said they were often engaged in rowdy behavior, but she had not specifically reported the harassment to him.

One female student spoke about a hall monitor making an inappropriate comment to her and feeling unsafe and uncomfortable. She reported the behavior. Another had a friend who reported sexual harassment she had experienced to a teacher.

The teacher then reported it to the administration, who confronted the perpetrator and his family. An administrator reached out to her, as well.

The girl said she was not completely comfortable with being pulled aside, even in a supportive way. “It kind of shook me. It’s [hard] to talk about things like that over and over again,” she said. “I feel like there’s a lot of movement in the student body to support women but when it comes to the administration I think there’s worry about ‘how to settle this one, this time.’”

Principal Mark Jackson  said he takes claims of harassment or assault very seriously. He added that in his lifetime, he’s seen the tide turn in a good way when it comes to taking victims seriously, believing their accounts, and realizing that “intent” often fails to correlate with “effect.” Just because someone “didn’t mean” to hurt someone else “doesn’t mean they didn’t do it,” he said.

Mr. Jackson and Assistant Principal Ericka Alschuler also said it is time to open up a dialogue between students and administrators about the systems in place. They are supportive of a school-wide Consent Week planned for April and eager to speak with members of the Women’s Rights Club.  “Our door is open,” Mr. Jackson said.

Another issue the campaign is trying to bring up is how people should intervene when they are bystanders to these situations, or how to handle when someone shares their experience of sexual harassment or assault with you.

Weinbaum shared her advice for bystanders. “Instead of acting quiet, stand up to them. Say this is harassment, this is not okay,” she said. “And if you want help, reach out to people; there are people listening to you to hear your story.”

“Realize they’re not just victims, they’re still people.” Ashburn shared. “When my friends tell me their personal stories it is so intense for me, because I’m a man and I don’t experience a lot of sexual harassment; it is kind of a culture shock. That’s why I wanted to get involved in this campaign. I wanted to do something about it.”

Some students shared powerful examples of intervention during interviews about the exhibit.

“[A guy] brought my friend upstairs [at a party] and shut the door and turned off the lights and I was like ‘What the heck?’ so I went upstairs and knocked on the door as hard as I could,” said an ARHS student. “He was like ‘What, what?’ And he opened the door and he said, ‘Oh I was just getting her a drink.’ Later my friend said, ‘No, he was trying to push me on the bed.’ So I stopped that.”

These things have been happening for a long time, but the Me Too movement has opened up conversations. “I’ve had more conversations with men about what harassment means than I ever had in my entire life,” said special education and English teacher Danielle Seltzer, the advisor to the Women’s Rights Club. I think it’s really incredible that as high school students, you are having this conversation now. I never did in high school,”

Ms. Iverson agreed. “I think every kid within the school should have the ability to work within a group setting to discuss it,” she said. The work is in no way done. However, here in school we can increase prevention methods, hold perpetrators accountable, and safely support those who have been harassed or assaulted.