Students gear up for Senegambian exchange 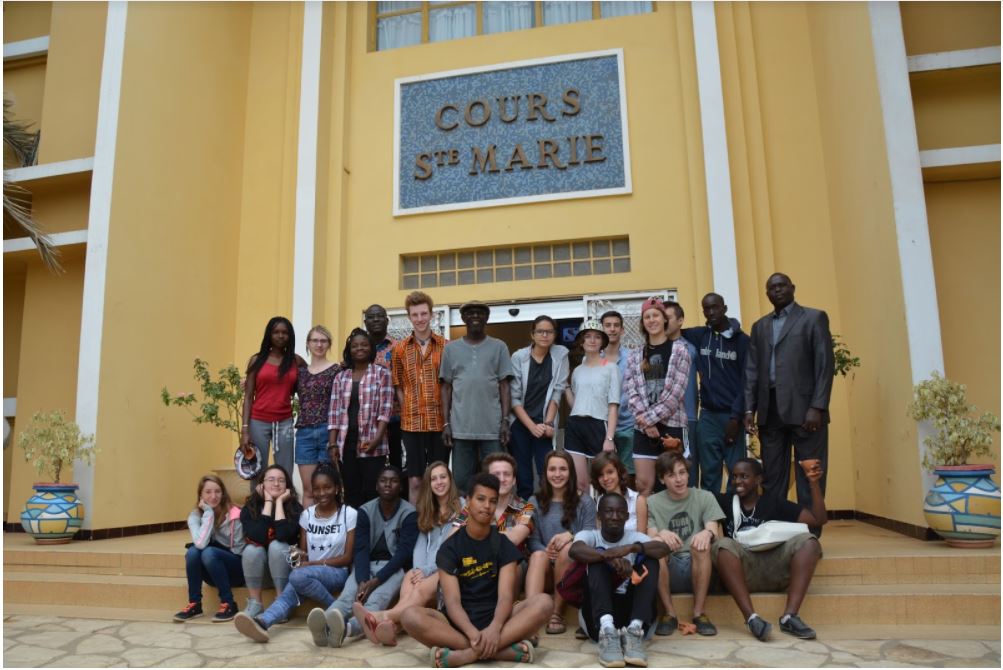 ARHS students on the last trip to Senegal and The Gambia in 2016.Photo: courtesy of the Senegambian Scholars Club

Ms. Alschuler is the former faculty advisor for the Senegambian Scholars and traveled with the group to Senegal and The Gambia in 2016.

The Senegambian Scholars is an exchange program through which ARHS students and faculty travel to Senegal every other year. This school year, from February 10 to March 4, a group of about 15 students will journey over the Atlantic Ocean to experience life in Africa.

Mr. Penimann and Mr. Sarr are the advisors and founders of the club.

This year, they will be joined on the trip by ARHS science teacher Aaron Kropf. Students have already started preparing by fundraising and receiving multiple vaccinations.

The club meets regularly in order to familiarize students with the culture and background knowledge that will help them on the trip.

They learn about Senegalese and Gambian history and culture, as well as relevant topics in literature and the sciences. Mr. Penniman emphasized that the club is not a vacation, but a powerful learning experience.

“It’s one thing to read about other cultures,” said Mr. Penniman. “That’s certainly an important thing to do. But it’s something a lot different when you not only go there but live with people, and then they come here and live with us.”

The trip starts in Dakar, the capital city of Senegal. Students visit Goree Island, off the coast of Dakar, where the slave trade took place.

“One of the most affecting sites on the whole trip,” said Mr. Penniman, “is what they call the ‘door of no return’, where you look out this door, which is the departure point of the slave ships and realize thousands of people went through that and then never saw their home again. It’s a pretty sobering place.”

Students also see more upbeat parts of the city like the Renaissance Monument, a statue of a man, woman, and child looking to the future. The statue is larger than the Statue of Liberty and towers over the landscape.

Other highlights of the time in Senegal include visiting Lake Rose, a naturally pink lake, and a visit to the nature reserve where students will see rhinos, giraffes, and lions. Students spend much of their time in Senegal in local schools.

Ms. Alschuler described one of her favorite days in Senegal as when her host family took her to a hair salon in the middle of the city. She felt a part of the society and culture in that moment, being in the middle of everything.

The trip can be fascinating but also difficult.

“In The Gambia,” said Ms. Alschuler, “there was a lot of corruption in the police, and we got stopped at every police station in every town. We got stopped maybe twenty times.”

Each time they were stopped, they had to pay a bribe to continue their journey.

The trip exposes students to the complexity of life in other countries–for better and worse.  In doing so, it dispels many stereotypes Americans hold about the African continent.

“Much of Africa, to the West,” Mr. Penniman explained, “has a single story. ‘Africa is a place of disaster, it’s a place of poverty.’”

In reality, Africa encompasses an enormous range of cultures, landscapes, and traditions. Students will sample cities, such as Dakar, and smaller villages.  They will see both the wealthy and the poor and hear about the triumphs and struggles of the nations.

New to the trip this year is that students will have a meeting with the president of The Gambia.

Zaim Elkalai, a junior at ARHS and member of the Senegambia Scholars, is looking forward to the trip. “I wouldn’t be able to forgive myself if I did not take advantage of the opportunity to visit Africa and learn about countries that are so different from anywhere I have ever been,” he said.

The trip benefits both the American and African students, who learn surprising cross-cultural lessons.

“Students discover, on both sides, that they have a lot more in common than what they imagined,”  said Mr. Penniman. “I’ll never forget the first trip when our students got to Senegal and met their hosts and they started talking about music. They wanted to know what the Senegalese kids favorite music was, and it was Rihanna and Beyonce. And our students said, ‘Oh yeah, that’s ours too.’”