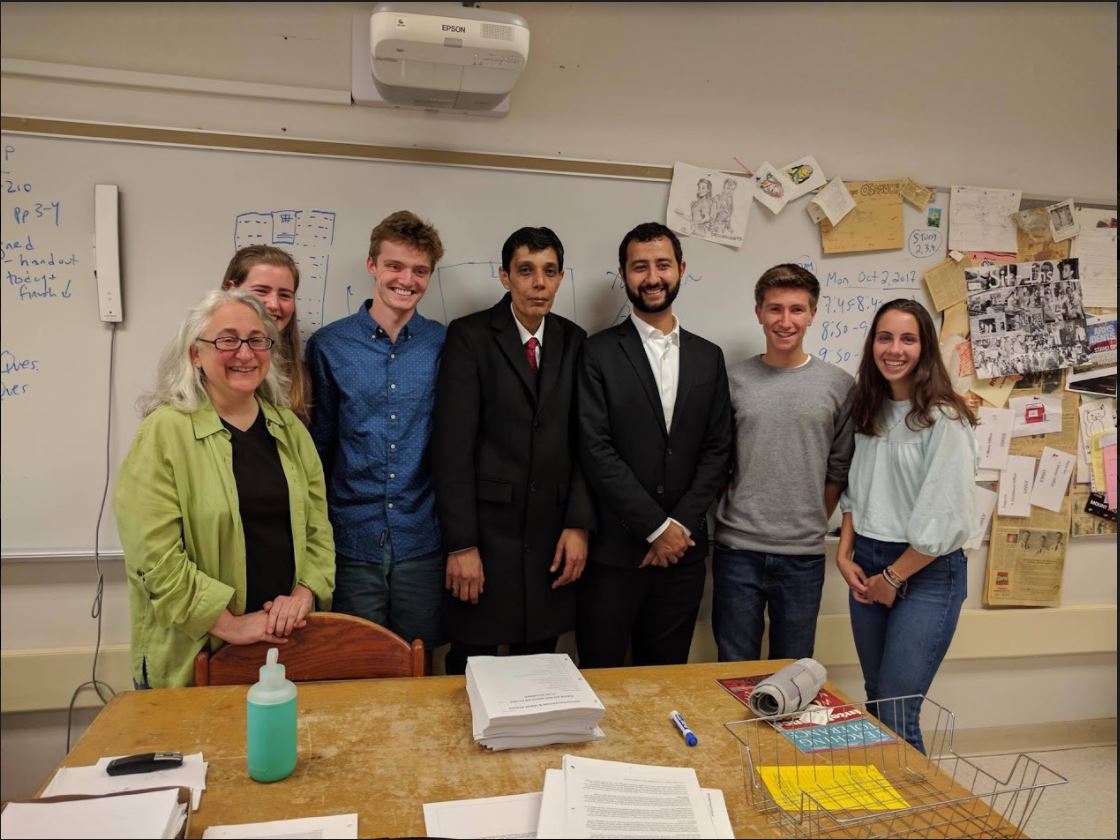 On September 28, 2017, the documentary Syria’s Disappeared: The Case Against Assad, was screened at ARHS. The film highlights the mass-scale murder and human rights violations being committed by the Assad regime in Syria.

The film highlights Mazen Al-Hummada, a former prisoner of the Assad regime. Mr. Al-Hummada visited ARHS on October 2, in cooperation with the Refugee in Distress club and the Valley Refugee Relief group, to meet with over 150 students.

Junior Maggie Thibault met with Al-Hummada in her Anthropology class. “I was not educated enough on the Syrian conflict enough before the presentation,” said Thibault. “As a country we are not doing nearly enough to help Syria’s fight for freedom. It was pretty interesting to see how he could go from being in this prison where he faced torture to talking and advocating against it. It made me appreciate life and the things around me.”

Leif Maynard, a junior and local activist for Syrian refugees and peace in the Middle East, is part of the Refugees In Distress Club at ARHS.

“This issue is important. People don’t connect to atrocities abroad,” said Maynard. “What people don’t realize is the United states can make a difference”

Mr. Al-Hummada himself was born and raised in Deir Ezzor, Syria. He has been an activist since the earliest days of the revolution, when he began organizing pro-democracy rallies and documenting the brutal repression of demonstrations.

In 2012 Al-Hummada was arrested by the Syrian government and spent almost two years in the Assad regime’s detention centers, facing brutal mental and physical torture. After his release, he fled from Syria to Europe and now advocates for democratic reforms, peace, and persecution of the Assad regime.

During his visit, Al-Hummada held a number of presentations throughout the day.

Senior Liza Dubinsky got the chance to attend the presentation in her International Relations class. “I knew what was going on but I wasn’t aware of the scale these things were happening on,” said Dubinsky. “It was a powerful presentation. It definitely made me want to get involved and help them [Syrian people] get justic. Something has to be done to get them justice.”

Luiza Wolf, also a senior, said, “His courage to speak up is very remarkable. It’s not easy to speak up after going through something like this.”

It has been over six years since Syrian uprising against the authoritarian regime of President Bashar Al-Assad and five years since the peaceful protest demanding freedom, democracy and basic human right turned violent leading to civil war in the country.

The Syrian Observatory for Human Rights estimated that over half a million people have been killed through Assad regime detention centers, aerial bombing, fighting between rebels, Islamist militants, and the Syrian Arab Army since 2012.

As of November 2017, civil war continues, leaving behind devastating impacts. Mr. Al Hummada’s visit shed light on this situation and left a deep impact on the student community at ARHS.

“When he came here, it was important to see how he holds so much strength and human decency,” said Maynard. “He’s been through so much but he still does so much advocacy work.”