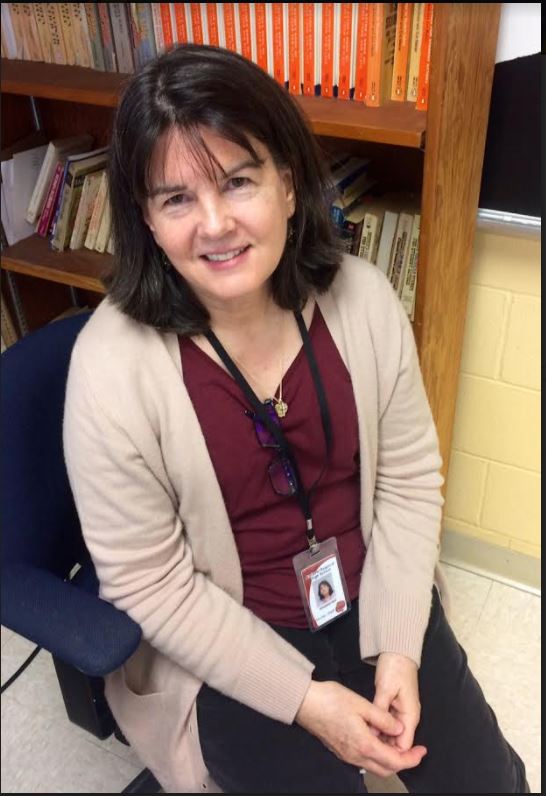 Elizabeth Bull is happy to be at ARHS this semester.Photo: Doug Eveleigh

Ms. Bull moved to Amherst this fall in order to be closer to family after living in Miami for 22 years. She has been teaching for about 30 years, mostly in high schools.

And now she is teaching two sections of Tenth Grade Literature, Writing, and Public Speaking and one block of Creative Writing.

Her father was a businessman who worked for Cream of Wheat; when the company was bought by Nabisco, they relocated to Connecticut so he could make the daily commute to New York City.

From kindergarten through ninth grade she attended a strict private school.

“It was a very good school, but strict, very regimented,” she said plainly. “It was just the way it was.”

Though she acknowledged getting homesick, she said also that “you’d have a big brother or sister to help you get acclimated.”

“I had good teachers across the board. They would be there for you,” she added.

She talked about how, in fact, such teachers were a large influence on her decision to pursue teaching herself.

Though she majored in English in college, Ms. Bull thought about a career in law.

“Law schools accept many English majors,” she said. “Law and language are so closely related.”

However, after one year of working as a paralegal, Ms. Bull realized that she would rather teach English than go into law.

Eventually, Ms. Bull found herself teaching in Miami. She said that, much like Amherst, Miami is home to students from all over the world.

“Teaching in Miami was very exciting,” she remarked.

Ms. Bull and I discussed her observances as a teacher in today’s world.

“Today, students are expected to make every minute count. They have less free time than my peers and I had.”

Despite time burdens, Ms. Bull has witnessed her students as being both “idealistic” and “altruistic.”

Knowing that the world her generation is passing down to ours is complicated, she nevertheless, she has hope for our ability to continue building a better, more just world.

She spoke of how the 1960s and 1970s, though tumultuous times to live through, were a period of change that moved society toward greater equality and justice.

With the fast-paced craze of today’s world in mind, she had this to say the younger generation.

“Give yourself time to be. Time to learn. Try not to get caught up in expectations,” she said. “And don’t be afraid to slow things down. Things tend to fall into place.”

And so, Ms. Bull has settled down in Western Massachusetts, hoping to stay for a good long while.

“Teaching at ARHS is a blessing,” she added.