Ready to roll: navigating life in a wheelchair 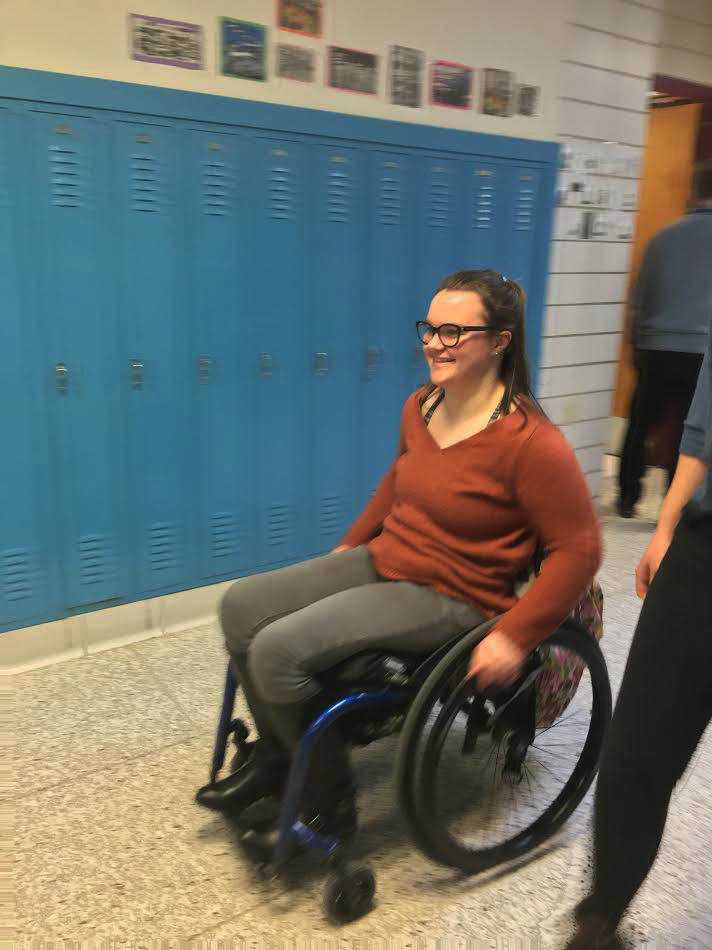 At 12 years old, Ella Budington, now a ninth grader at ARHS, became one in a million.

The doctors did not know why it happened—Ella was a perfectly healthy kid living a relatively unremarkable life. She was on the swim team, she loved shopping and spending time with her friends, and she wanted to be an interior designer.

But in an instant, Budington’s life changed course. Her legs gave out and she was rushed to the hospital where she was soon diagnosed with Transverse Myelitis, a neuro-immune disease that causes a range of frightening symptoms, from unbearable nerve pain to extensive paralysis.

Budington was considered lucky: only her legs were affected.

A year and a half later, Budington leads a life just like any other student in high school. The only difference is that now she does so with the help of a wheelchair.

She still loves shopping and hanging out with her friends, and her greatest ambition is to be an Olympic athlete.

All that has changed is that rather than swimming the 400-freestyle beside Katie Ledecky, Budington hopes to conquer the 400-meter wheelchair race and become a Paralympic champion.

ARHS sophomore Justin Xiong also uses a wheelchair. He agrees that his chair does not define what he can and cannot achieve.

Xiong has muscular dystrophy, a genetic disease that causes his muscles to weaken over time and first placed him in a wheelchair in second grade.

“My mobility is limited,” he said, but he does not intend to let that keep him from his ambitions.

Xiong transferred to ARHS from the Chinese Immersion School in Hadley this year with his brother Austin, seeking a more well-rounded education than that school had to offer.

He has a passion for math and science and said he plans to go to college and pursue a career in business or economics.

Besides spending time with his family, Xiong uses his time to dive deeper into his interests by reading about business and taking online college courses.

“[My wheelchair] is just another thing I have to think about,” he explained. “Other than moving far away, [my options] haven’t really changed.”

These days, Xiong doesn’t think about his wheelchair much.

The ARHS building is very accessible and the school also offers Xiong the use of the wheelchair accessible bus and an aid to help him throughout the school day.

“The best thing is that people are scared of being run over in the hallway,” he said, chuckling at the image of his peers parting like the Red Sea.

Growing up in a wheelchair was very tough at times, but for Xiong, getting on with life proved to be a matter of acceptance. “It’s harder when you’re little,” he recalled. “It does get in the way, but you find ways to work around it.” The way he sees it, we all have hurdles we must overcome, no matter who we are or how we appear. As he says, “Everyone has their own troubles.”

For Budington, too, adjusting was difficult, but in the end, going back to her usual activities turned out to be easier than she expected.

Learning how to use her wheelchair took some time, but, “It’s like riding a bike,” she said.

And as for getting around, she figured it out quickly and found new ways to do the things she wanted to do. “The school is pretty accessible; there are ramps and elevators and I don’t need a lot of help.”

Of course, it hasn’t all been smooth sailing.

“There are days when I watch people walk and I think, ‘Why can’t I do that?’” Budington said. But she reminds herself, “I’m in a wheelchair but I’m human, I’m fine, and I can do anything you can.”

Most importantly, however, Budington did not have to go through this difficult transition alone. She found herself at the center of an incredible support system, from neurology specialists and rehab therapists to her closest friends and family. “Everyone has been very supportive,” she said. “There are so many people who want me to do what I love again and will stop at nothing to help me do it.”

Both Budington and Xiong agree that using a wheelchair is less limiting to their lifestyle choices than people think.

“I can do the same things people that can walk can do, and sometimes even in cooler ways,” Budington said with a smile. In fact, in most ways, Budington’s life is indistinguishable from those of any of her peers. She has an active social life, plays sports, posts on Instagram, and has a great sense of humor.

Even so, Budington finds that people are often tense and awkward around her. Before she was in a wheelchair herself, she too remembers feeling uncomfortable around people who used chairs, but now she knows how “weird” it can feel to be at the receiving end. She has found that keeping things lighthearted helps break the barrier and remind people that she is, in the best way, just a regular person.

“I’m a jokester,” Budington said. She explained, for example, how sometimes a friend makes a comment like, “My legs hurt so badly,” and she counters, “I can’t feel mine.” People often don’t know how to respond other than to apologize profusely, but she reassures them that she’s just making a joke.

Xiong’s approach, on the other hand, is not to concern himself with how others perceive him. Even though people sometimes treat him differently because of his disability, he doesn’t pay much attention to them. “In class—you know, people know I’m smart,” he said, and that’s enough for him.

But don’t be fooled by Xiong’s satisfaction with keeping to himself—he still finds great value in compassion and connection with others. “You have to apply your own struggles to other people and [try to understand] how they feel,” he said.

Like Xiong, Budington’s experiences in a chair have taught her the importance of compassion and acceptance. As she continues through life, she hopes to use these experiences to inspire and uplift others. “Physical disability does not equal mental disability. Don’t judge people. Don’t jump to conclusions. And you can be beautiful any way you want to be.” These are lessons Budington believes we should all learn, whether we’re seeing the world from a wheelchair or not.