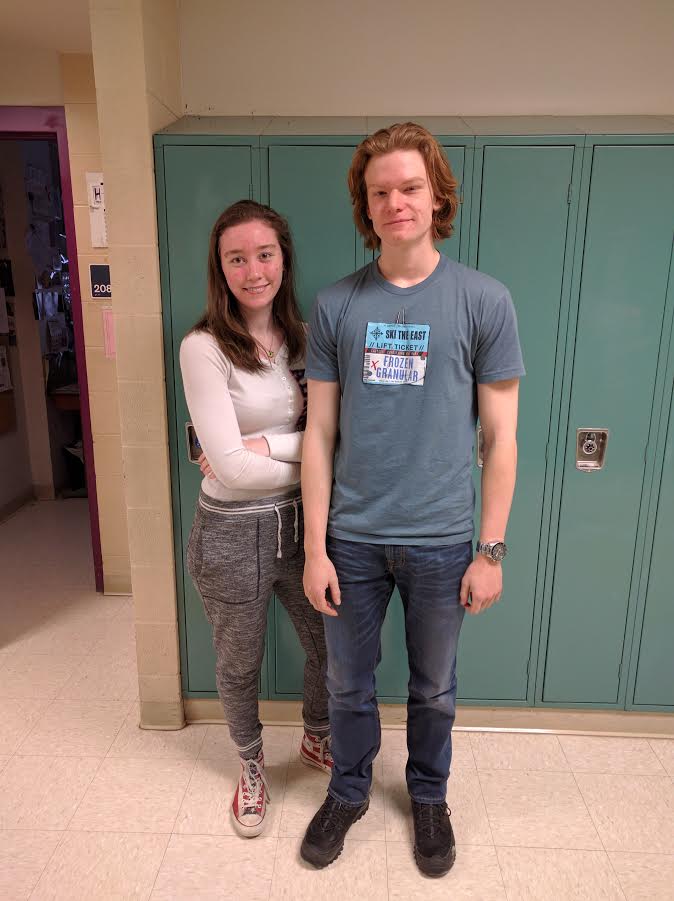 In high school, relationships are both fantasized about and popularized.

Whether you are an experienced lover or have been single and don’t plan on changing, you will most likely be impacted by a high school relationship in some way.

As a single type who doesn’t date much myself, it does feel like there is a great subconscious pressure to be in a relationship in high school.

“Relationships are absolutely glorified and used as status symbols. I have seen people use relationships as a way of demonstrating superiority, as though a person in a relationship is inherently better than a person not in one,” said junior Vincent Rotello.

I sought out students in relationships to actually find out what their experiences were with dating a person at our school.

In asking where people met, how long they had been together, and other relationship details, I received various responses.

Senior Tori Patton is in a relationship with Andreas Gilpin-Falk, another senior. “We’ve been together for nearly two years this winter. We met our sophomore year,” she said. “We had Geometry and U.S. History together. Geometry was mostly juniors so we naturally gravitated toward each other and I would ask for his help a lot in the class.”

Zachary Hatiras had a similar meeting with his current girlfriend.

“We met in the photo room my sophomore year. I was talking to her friend and she came in because she needed a ride from her and we talked for a little and she gave me her Snapchat. We just started talking and then hanging out and then dating,” he said.

Both couples met in school and have maintained a strong relationship thus far.

Some byproducts of these healthy relationships are admiring what they love about each other and doing various activities together. Other times they  ignore that they are in a relationship and just hang out like true friends.

Patton emphasized that she liked her boyfriend right away.

“The first thing I noticed about him was just how smart he is,” she said. “He’s a stunning student and being with him made me a better student as well.”

“He’s also extremely sweet and a classic romantic, which is one of my favorite things about him,” she added. “Besides the cliche of having similar interests and opinions, he’s also just my best friend. We have fun together and do stupid things like all best friends do.”

“It’s actually kind of funny because half the time people have no idea that we’re together; we don’t cuddle or hold hands in class like other couples,” she said. “We just laugh and talk like normal people. I really like how low-key we appear as a couple.”

Both Hatiras and Patton commented about both the extravagant, creative dates and  also the simple activities that they have embarked on with their significant others.

“When we’re hanging out, we either just watch Netflix at one of our houses, see a movie and get Chipotle after, or we’ll just go out to dinner,” said Patton. “If we want to do something different, we’ll go on a hike or go to Yankee Candle, and we are regulars at the Lupa Zoo!”

Hatiras reflected on his own memories of his relationship. “We went on a date for two weeks to Greece to visit my family. It was the greatest two weeks of both of our lives,” he said.

Patton had more to say on her views of high school relationships in general.

“I think high school relationships are the most heightened out of all relationships simply because we’re young and stupid, bundled with insane amounts of energy,” she said.

“There is a lot we have yet to learn. The reality of relationships varies for everyone; for some couples it does truly feel like a fantasy, but for others the lows don’t outweigh the highs and that leaves them feeling like they didn’t get that dream experience they always see in the movies.”

The stages we go through in high school can be the most emotionally and physically pivotal moments of our lives and many things that may not matter at all are blown out of proportion.

“It seriously irritates me when people say they’re ‘done’ with relationships because we’re only in high school and it’s stupid to decide to give up just because of one bad relationship you had freshman year,” Patton said. “There are so many people out there who can change your life if you just give them a chance.”