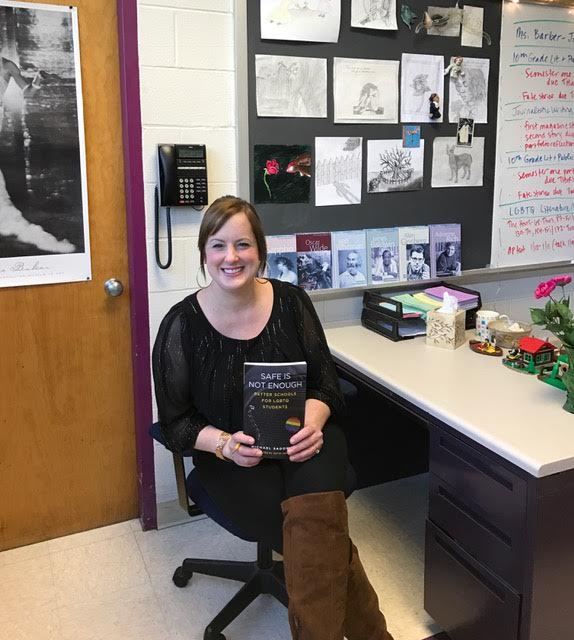 There are many books written about LGBTQ issues in education, but how many have a leading chapter about the LGBTQ Literature class taught by English teachers Sara Barber-Just and Kristen Iverson?

Bard College professor and author Michael Sadowski decided to feature the class in his brand new book, Safe is Not Enough: Better Schools For LGBTQ Students, published by Harvard University Press, because it was the first one offered in an American public high school.

In the U.S., there are still eight states that actually ban the “promotion of homosexuality in schools,” meaning that teachers and students can be punished for even bringing up the topic. In his book, Sadowski explores schools all over the country that go beyond just enforcing anti-discrimination policies or sponsoring Gay Straight Alliances (GSAs). He highlights curricula and programs that foster a truly supportive school climate.

The book, available in the ARHS library, is split into eight chapters and covers topics like “Bringing the Conversation into the Classroom,” “Turning Adversity into Activism,” “Respecting the ‘T’ in LGBTQ,” and “Opening Up Spaces for Discussion.”

According to Christopher McGinley, a professor of educational leadership at Temple University, “Academic success is only possible when students know that they are safe, welcomed, and valued in the classroom and the school, and when LGBTQ identities are honored and included in the school curriculum.”

The book explains how Ms. Barber-Just developed a completely new curriculum for her master’s degree in Social Justice Education at Vermont’s Goddard College.

In the book, she said, “What I really wanted to do–but I thought ‘nobody can do this,’ was teach a whole course in gay and lesbian literature. Everything I’d heard–and everything I still hear, is that it’s too controversial.”

Before being approved, Ms. Barber-Just’s course began as a “pilot program” of 10 students, nearly all in the GSA. The class received positive reviews, eventually leading Ms. Barber-Just to propose that it be offered as a school-wide English elective. The course was approved by the school board and began in 2003. It has been offered almost every year since then and is one of the most popular ARHS English classes.

The class also examines how LGBTQ individuals were depicted in the twentieth and the twenty-first centuries, transgender identity, race issues, and feminism.

The course includes an intersectional approach, meaning it is attentive to how many pieces of our identity overlap, including religion, race, and gender identity. Honors texts include Alice Walker’s The Color Purple; Sri Lankan author Shyam Selvadurai’s Funny Boy; and Becoming Nicole, by Amy Ellis Nutt.

Over 1,000 students have taken this course over the years and many have left the class feeling changed.

In 2014, Williams College graduate Daniel Lee nominated Ms. Barber-Just for the Williams College George Olmsted Jr. prize for Excellence in Secondary School Teaching. “[The course] forced me to look at my own stereotypes and prejudices,” said Lee, in Sadowski’s book.

Gabriel Fontes, a 2015 ARHS graduate and fan of the LGBTQ Literature course, also starred in Sadowski’s book. “I am in the middle of my first week at Brandeis University with the intention of becoming a high school English teacher, largely due to the influence of Ms. Barber-Just and LGBTQ Lit.,” he said.

Fontes added, “Nothing was off limits: #blacklivesmatter, Laverne Cox, the Kinsey scale, and misogyny in hip-hop all came up in classroom discussions. Ms.Barber-Just guided fluid and relevant dialogues that engaged nearly every student. Students who never participated in other classes came to LGBTQ Lit. ready to read and dialogue. She gave every student a voice.”

Overall, Sadowski wrote Safe is Not Enough in order to educate the country about how we can work together to make schools more inclusive for LGBTQ students and staff.

In Ms. Barber-Just’s copy, Sadowski inscribed a note that reads, “Sara, your work is an inspiration and I am honored to include it in the book. I hope people replicate your curriculum all over the country. Thank you!”