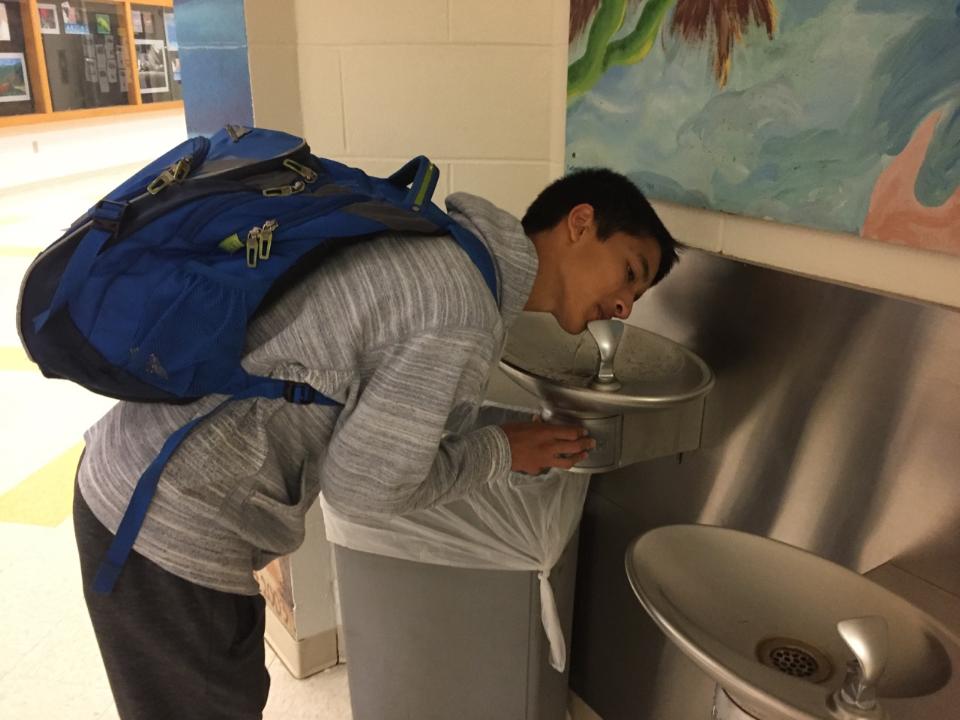 On September 8, 2016, water tests were run at 58 faucets and bubblers at the high school.  Upon testing the samples without flushing them out, four bubblers and three sinks had high amounts of lead in the water.

After running the water for 30 seconds, there were three bubblers and one sink that still had high levels of lead.  The bubblers were located in the boys’ locker room and the training room.

The state line for levels of lead in water is 15 parts per billion (ppb).  The three bubblers that were flushed out had levels of 42 and 48 ppb of lead.  The sink, located in the nurse’s office, had 16 ppb of lead.

Lead can affect organs in the human body, specifically the brain, liver, and kidneys.  Young children are especially at high risk, because their brains are still developing.

According to the Massachusetts Department of Public Health, “there is no safe level for lead exposure.”

On September 21, 2016, the Amherst Select Board voted to close the Atkins Reservoir, the primary water source for the town, because of the drought.

The town has been temporarily using water from wells in the Lawrence Swamp.  The lead issue is not caused by the source of the water, though; it is caused by the old pipes it is flowing through.

Fort River, Wildwood, and the middle school were all built in the late 1960s to 1970s, so repairing their pipes is a priority.  Some sections of pipes and valves were replaced with lead-free parts at Fort River.

Water tests of 16 water outlets were taken on October 11 at Fort River after replacing the fixtures.  After flushing out the water for 30 seconds, results showed all the outlets were below the stateline.

Despite all the best efforts to provide clean water, students at ARHS remain concerned.

“It’s pretty crazy that at a public high school, there would be high levels of lead in the water,” senior Ben Ryan said, “especially in athletic places where a lot of people drink it.”

Ryan still drinks the water at the high school, but is worried about how clean it is.  “I just hope it gets fixed soon because it is quite a problem,” he said.

Junior Kaleb Ferro is also concerned about it. “After football practice I drank so much [water] from the lead-infected fountains without knowing it had lead in it,” he said.

Since hearing the test results, Ferro has completely stopped drinking from the bubblers at the high school and has been bringing bottled water from home.

Others who have heard about the high levels of lead have also stopped drinking the water.

“I’m just surprised that they didn’t know about it before,” freshman Vianka Acosta said.

The testing done at ARHS was after all a voluntary program by the Mass Department of Public Health and Massachusetts Department of Environmental Protection.

In other words, the testing was not required.

“Is it safe?” junior Sahar Douglas asked.  “Is running the water for only 30 seconds enough to tell how clean it is?”

Junior Ty Loper commented that it makes sense that there is lead in the water.

“It’s expected because the piping is probably pretty old,” Loper said.  “I still drink the water because I don’t think it has an effect on us as much as it does on the elementary school and middle school students.”

Testing earlier in the school year at Wildwood Elementary, Fort River Elementary, and Amherst Regional Middle School all had similar, if not worse results regarding lead in the water.

“The least the schools can do is to have clean water,” junior Ryan Lloyd said. “We pay so much in taxes. It really is the least they could do.  It’s crazy that seven year olds are being exposed to unhealthy water.”