Activists at ARHS talk about the best ways to foster dialogue, promote change 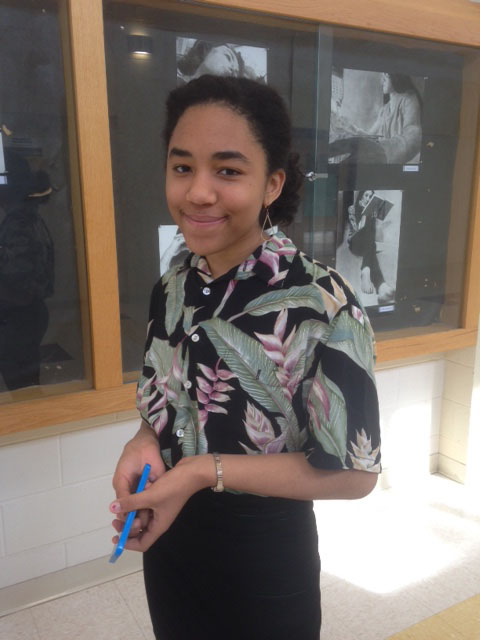 Just weeks ago on Hampshire College campus, the student body erupted into fervent activist discourse that quickly turned sour the commencement ceremony of 2016’s graduating class. Within the context of the college’s reputation, however, these outbursts shocked few.

Known for its culture of passionate social justice, Hampshire has, in recent months, had to cancel classes for entire days in order to process student discontent with the school administration.

Claims that officials have not sufficiently investigated incidents of racially motivated and gender-based harassment, as well as sexual assault, have consequently morphed the atmosphere on campus into one of anxiety.

With tensions high between various student groups and school authorities, the aggression that overtook the college’s May 14 commencement was merely a grand finale to this brewing conflict.

Yet the zeal that has swallowed up the past few months at Hampshire extends beyond the college’s campus.

Aided by widespread availability of Internet access, social justice circles can expand across boundaries both literal and metaphorical, granting to open discussion a wider venue in which to operate than ever before.

And while the subsequent heightened passion within activist circles serves a purpose to many who seek to incite social revolution, this enthusiasm to change the world demonstrates an increasing tendency toward quickly warping into overzealous aggression.

Different individuals may draw that distinction, however, at wildly different places. To some, activism retains no strength without that sense of vehemence. Others may feel intimidated to enter spaces with such intensity.

Even among the hundreds of students, faculty, and staff of the ARHS community, individuals identify themselves as activists to wildly varying degrees. Nearly every day after the 2:20 bell, numerous clubs devoted to promoting gender and racial equality occupy classrooms across the building. With cooperation from the administration and devoted faculty advisors, students at Amherst frequently organize events across the school year to facilitate activist discussions among the student body. Many inside and outside of ARHS view the school as particularly liberal and forward-thinking. Not everyone agrees.

Junior Nia Whitmal describes herself as “very involved” with the school’s chapter of the national Black Lives Matter organization. And although she said the group has not organized quite as many events this year as in those previous, in what it has accomplished, her own work has been integral.

As an eleventh grader, the reigns of leadership have not yet transferred to her, but with the seniors on their way out, Whitmal will soon tackle the change of stepping up to the plate.

Once in a more prominent position leadership, Whitmal said she hopes to expand the focus of the group and make a greater effort to merge goals with other activist clubs in the school.

“I plan to attend Women’s Rights Club and say, hey, if you’re interested in women’s rights, you should be interested in Black Lives Matter. The two aren’t mutually exclusive,” said Whitmal.

As of yet, the groups have interacted minimally. Some students fear the Women’s Rights Club has failed to fully embrace and strive toward a mindset of intersectionality, which considers the overlap of various social identities– race, gender, class, ability, and sexuality, among others– in discussions of systematic oppression.

Whitmal adds that discussions such as these can often make the people involved uncomfortable. Individuals become more likely to misunderstand one another, and from a lack of clear communication emerges conflict.

When someone mispeaks or says something that is deemed offensive, activists need to always keep in mind a speaker’s intentions, said Whitmal. From there, where they draw “the line” between a harmful or misinterpreted statement relies on a case-by-case scenario. Particularly when these types of exchanges happen between people of both privileged and oppressed identities, tensions run high and the fear to misspeak may overcome a willingness to dialogue.

“There’s obviously going to be some hostility there,” said Whitmal. She noted that “otherizing” people for this does not advance discussions, however, nor does excluding them for straying in thought from a social justice agenda. For her, activism means changing the minds of individuals, truly affecting the way people are thinking. “If you’re not doing that,” she said, “it’s not really activism.”

Fellow student leader Joe Konieczny agreed, stressing the value of leaving room for individuals to make missteps and still be allowed to rebound and rejoin the conversation.

“I like to have a lot of room for error,” he said. Rather than jump on a person for demonstrating accidental bigotry, which he calls “a learned bias,” he said people should use the incident for educational purposes and dissect where the notion comes from and how it causes real harm.

He adds that it helps to start of dialogues with an experienced speaker to get things rolling and set group expectations and norms. “We set examples,” he said. “So whenever we have discussions, we have trained activists start.”

For Konieczny, dialogues cannot happen successfully without designated “safe spaces,” which he defines as being settings “where everyone can participate in a conversation without feeling their identities or any part of who they are is under attack.”

Some argue that these “safe spaces” inhibit progressive dialogue, which they say ought to make speakers a bit uncomfortable. Conversations examining oppressive power structures tend to heavily scrutinize privileged identity groups, which can place individuals of those groups in an awkward position within the discussion.

Many activists encourage embracing this kind of discomfort. While they acknowledge that dialogues cannot turn into personal attacks against an individual, lest petty argument distract from greater issues at hand, they also stress the value of listening with an open mind.

A person of a privileged background who refuses to partake in a conversation speaking critically of their privilege because it makes them uncomfortable derails the dialogue. For activists, balancing “safety” and the inherent awkwardness of honest discussion poses yet another challenge on top of the social justice work they strive to achieve.

According to Konieczny, the school’s Black Lives Matter chapter has found this median through the sit-ins and open houses it has organized over the past few years, noting that more relaxed settings or “artistic” venues are more likely to encourage dialogue and draw newcomers into the discussion.

And pulling people into activist mindsets is half the work. For a movement to retain its strength and gather momentum, new faces and voices need to join throughout. Especially at ARHS, activism thrives on a sort of passing-of-the-torch in the various progressivist clubs.

Over the course of his high school career, Josiah Vasquez has cultivated a passion for social justice. Currently serving on the regional school committee as a liaison for the student advisory council, he first involved himself with Amherst’s activist circles when he joined POCU, People of Color Unite, his freshman year.

“That’s when I started talking about systemic racism and how that works its way into our society,” said Vasquez.

Vasquez also attributes much of his own work to former student and ‘15 graduate Sajo Jefferson, who, he said, first introduced him to the words and language of social justice discourse. As a graduating senior, he continues to pursue his work with an admirable vigor, establishing himself as a major force within the activist scene among the student body at ARHS.

But despite the many days devoted during the school year to dialogues and awareness on social justice issues, Vasquez said he feels the administration fails to truly sponsor honest activism.

“For me, personally, the school has always kind of dropped the ball a little,” he said, suggesting that one-day events like Dialogue Day or week-long special events like Consent Week place time-limitations on thinking about issues that the community should address consistently and authentically  throughout the year.

Yet he admits that facilitating these kinds of dialogues with people who do not ordinarily do activist work often poses inevitable complications in communication.

Individuals who may place themselves or otherwise fall outside the sphere of social justice movements generally don’t have all the activist language necessary to navigate these kinds of discussions or topics, said Vasquez.

Newcomers don’t always understand the “norms” of dialogues, such as using “I” statements and avoiding broad generalizations. He added that this discrepancy simply in activist discourse fluency between social justice veterans and newcomers erects walls before a discussion may even start.

“I love when new people come and talk and try to listen,” he said, adding that even people doubtful of activist work can still contribute to the conversation. When dialogues turn into telling newcomers that they are wrong or simply ignorant because of their own experience-based biases, he said, the discussion rejects a new perspective and turns away an opportunity for growth.

“You have to understand that it’s a process,” said Vasquez. “It has to be a conversation, not an argument. You can’t argue perspectives.”