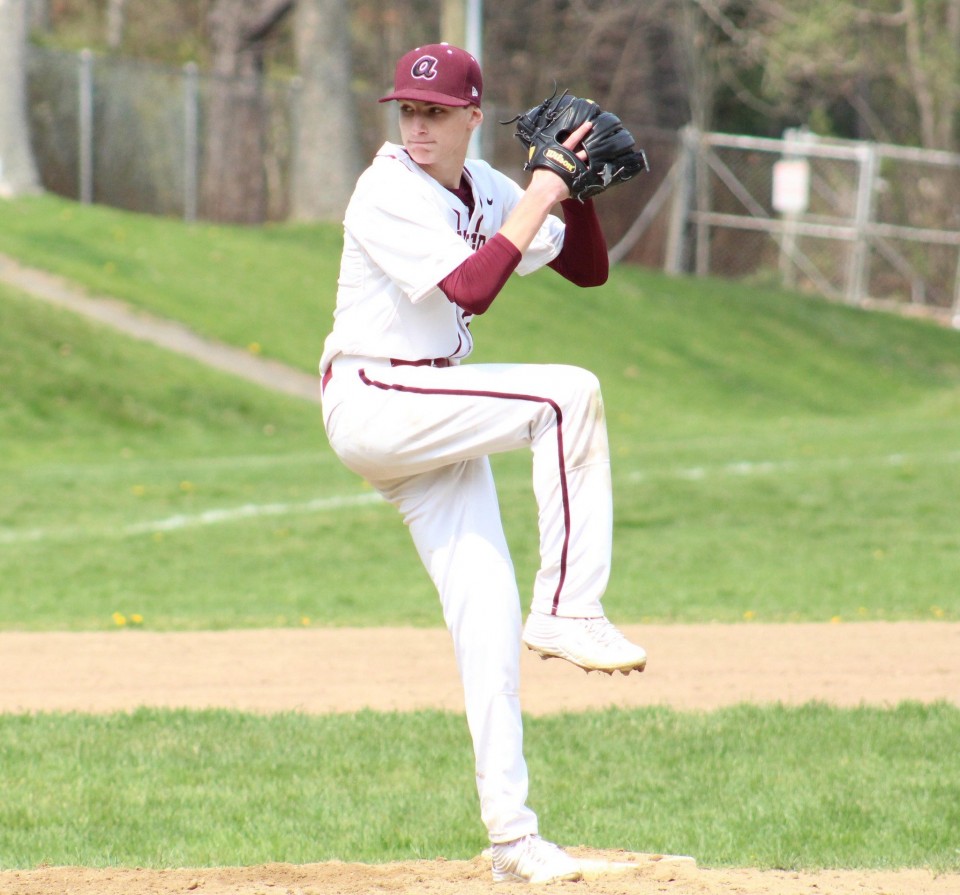 Nathan Masteralexis is a captain of the baseball team.Photo: Masslive.com

The Amherst Hurricanes baseball team is focused on building on the success of last season.

“Working hard, you’re gonna get out what you put in. It’s no surprise that the hardest working teams win. It’s no coincidence,” said Nathan Masteralexis, one of the captains.

Due to the loss of many seniors, the team, led by talented juniors including captains Jake Balderston, Will Budington, and Masteralexis, will have to focus on the process this season.

The captains are ready to step into their new roles. Masteralexis and his co-captains all have experience on the mound. Budington, a pitcher and centerfielder, also recognizes Masteralexis as a key player for the team since the lefty leads the team from the mound and throws a good curveball.

He also thinks Balderston will be a huge impact player this season.  “He made the team as a freshman, plays the hardest position, catcher, and is the best all around player,” said Budington.

The eighth year head coach is Greg Vouros, also a paraprofessional in the Pathways to Independence program. He is “pretty direct, not very complicated, and gets on our case when we are not doing our best mentally and physically,” said Balderston.

Vouros knows how to prepare his team to compete against the best in the state. His team won the state championship in 2010 and the 2015 team advanced to the Western Massachusetts Championship.

“Coach is very laid back but his thing is getting the most out of every kid. He doesn’t let kids settle for less than their potential,” said Budington.

Balderston references a team goal for the month, to “have a really good first half of the season, to put us in a good position for playoffs.” The goal for the entire season is to make it to the “Western Mass finals at least, if not Western Mass Champs,” said Masteralexis.

The captains know that one of those goals has to include winning at least 10 out of 20 games to earn a playoff spot.

They want to “surprise some people in the playoffs. We’re a young, inexperienced team. People aren’t expecting a lot from us,”said Budington.

Balderston enjoyed the experience of  “getting to play at UMass for Western Mass finals and semis.” But Balderston said overall the entire season was a highlight. “ [We] had a great group of seniors and it was fun to be a part of it,” he said. Masteralexis remembers “winning on senior night against Longmeadow in the 10th inning.”

Team chemistry seems to be a strength for the 2016 Hurricanes.  Some have played baseball together since fourth or fifth grade and many of the juniors on this team are coming off successful seasons on the ice and on the basketball court for the Amherst Hurricanes.

“I love winning and going to practice and hanging out with my friends and playing baseball. It doesn’t get better than that,” said Masteralexis.

Budington also values his teammates. “What I love about baseball and kind of specifically, this team, is we are all friends,” he said. The team eats together a lot, hangs out together, and drives around, talking about the game. “We talk about what we are doing well and what we need to work on. We communicate a lot,” said Budington.

The captains mentioned hard work as the key factor in the team’s ability to reach their goals.  Balderston says the team plans to achieve their goals by “working hard, being fundamentally sound, focusing on one thing at a time, being focused on each other, and working well as a team.”

Masteralexis also credits  the team’s willingness to work. “We are the hardest working team and all our success is directly correlated to that. Even with the lack of experience, we have players that know what it takes to win,” he said.

Budington added, “Just work hard. We don’t like taking days off which is kind of odd for a high school sport. We are looking at it as a two year season and also preparing for next year since we have a lot of juniors.”

Important games this season are against Central, Minnechaug, and Westfield. “Those teams are consistently the best teams. They are tough games that we need to win,” said Masteralexis.  Northampton,  Amherst’s Battle of the Bridge rival, also has a young team.  Expect the Northampton-Amherst game later in the season to be a key match up.

With the team’s commitment to working hard toward a long-term goal, this is going to be an exciting team to watch over the next two seasons. Budington understands what it takes to make a run in the playoffs. “We are gonna be a scrappy team this year. We don’t have the most talent in Western Massachusetts, but we are gonna fight to win games. No matter how ugly they are, we are gonna win games to make it to playoffs,” said Budington.

The captains can also use what they learned from last year. “The team came into the playoffs as the number five seed and had to play Pittsfield and Cathedral, two of the better teams in Western Massachusetts, in order to get to the finals. No one was expecting a lot from us. We didn’t even expect to go that far,”  recalls Budington.

While opponents may overlook the Hurricanes, the captains are setting the bar high for the 2016 season.  If the first game against St. Peter’s Marian is any indication, all the top teams in the state are going to take notice of the young Hurricanes. As of May 8th, the Hurricanes record was 2-6.